Banning TikTok and WeChat: Is the US afraid of competition?

Despite little or no evidence that China apps TikTok and WeChat are a threat to US national security, Trump has signed executive orders effectively banning them from the US by 20 September. US-based academic Zhu Zhiqun reviews the possible reasons for Trump's decision, and discusses if other countries would follow suit. 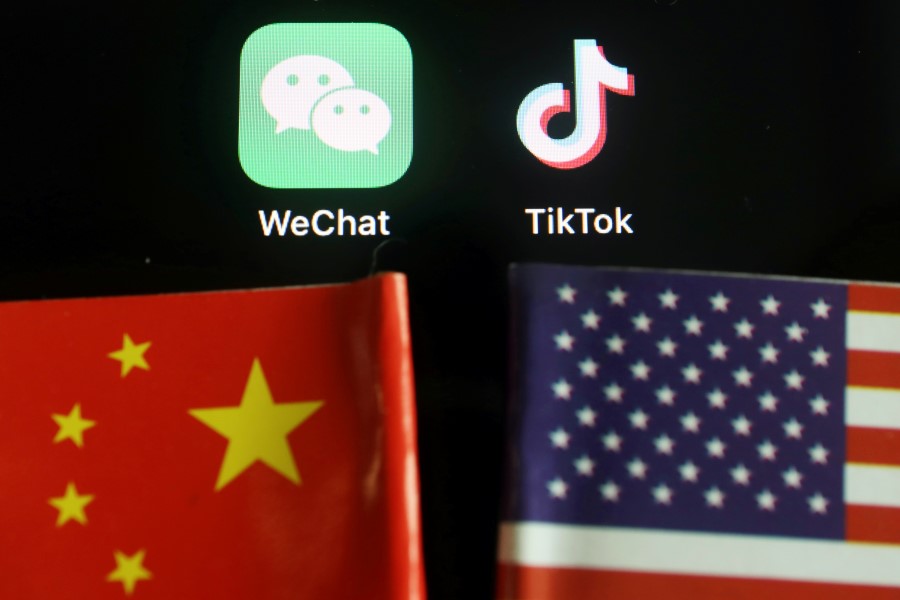 The messenger app WeChat and short-video app TikTok are seen near China and U.S. flags in this illustration picture taken 7 August 2020. (Florence Lo/REUTERS)

Candice Chan - 17 January 2022
China-Russia rivalry in the Central Asian region is intensifying, with the US's departure from Afghanistan and the two countries seeking to fill the power vacuum by working within their Central Asian spheres of dominance. Can the two powers work together to foster greater regional stability or will they let their competitiveness get the better of them?
Read more
Translated by Candice Chan on 12 August 2020

TikTok, one of the most popular apps among Generation Z, or people under 25 years old, is facing eviction from the US market by the Trump administration. According to an executive order issued by Trump on 6 August 2020, TikTok has 45 days to decide its fate. By the end of this grace period, TikTok will either have been sold to a US company in order to stay, or will be sent packing.

Trump also issued another executive order on the same day that will prohibit any transaction that is related to WeChat by any individual or entity in the US in 45 days. Unlike TikTok that is young Americans’ favorite app, WeChat, which is owned by China’s tech giant Tencent, is used mostly by overseas Chinese or others having family or business connections in China. It is not widely known to most Americans. Why would Trump ban TikTok and WeChat? What does it tell us about US-China relations?

TikTok became available worldwide, including in the US, after merging with Musical.ly in August 2018. Until recently, most of the millions of TikTok users in the US did not know, and probably do not care, that the video-sharing app was developed by a Chinese company. ByteDance, TikTok’s Beijing-based parent company, has projected itself as a global company, not a Chinese one. ByteDance’s success is stunning given its short history. The startup company was founded in 2012 by Zhang Yiming, a 37-year-old home-grown Chinese engineer who represents a new generation of Chinese entrepreneurs: ambitious, sharp, persistent, market-driven, and with a global vision.

Will banning TikTok and WeChat hurt Trump in the upcoming election since he will offend so many users? Not likely.

Let’s be frank: as it stands now, Trump has a very slim chance to be re-elected due to his deplorable job performance, especially failing to control the coronavirus. Playing the “China card” might be the only hope to salvage his re-election campaign.

The free-fall of the US-China relationship in the past few months has shocked most observers, but it did not take place overnight. This is such a complex relationship and many difficult issues on several fronts have bubbled up at the same time — from Xinjiang and Hong Kong to Taiwan and the South China Sea, and now “national security” has emerged to be a key area of conflict. The genie is out of the bottle. No wonder many observers fear a new Cold War will break out between the two countries.

Will banning TikTok and WeChat hurt Trump in the upcoming election since he will offend so many users? Not likely. The profile of TikTok users is generally young and liberal, a group who would not vote for Trump in the first place. And since US-China relations are so terrible, it is hard to imagine most Chinese-Americans will vote for Trump whether he bans WeChat or not.

If Biden wins the November election, US-China relations are unlikely to drastically improve. The conflict between the two powers is structural, not personal or partisan.

Trump’s harsh decision on TikTok might also be his personal revenge against the app. In a June 2020 rallying in Tulsa, Oklahoma, Trump was expecting tens of thousands of people to show up. The actual number — just a few thousands in a largely empty stadium — was embarrassing to him. Apparently, TikTok users stood him up by reserving tickets in advance but with no intention of attending the rally.

It might be easy to blame Trump for the current status of US-China relations, but the problem runs much deeper. It should be noted that the mainstream American attitude toward China is not that far from Trump’s. The latest Pew survey found that 73% of Americans hold negative views of China, the highest in decades. In addition, 64% Americans believed China had dealt with Covid-19 poorly. If Biden wins the November election, US-China relations are unlikely to drastically improve. The conflict between the two powers is structural, not personal or partisan.

In early July 2020, after Hong Kong’s national security law was passed, TikTok decided to pull out of Hong Kong, partly to prove that it does not and will not share users’ data with the Chinese government.

China’s “wolf warrior” diplomacy in recent years has undoubtedly contributed to the downward spiral of the bilateral relationship. On the other hand, US policy toward China has become increasingly confrontational and punitive, from cancelling Fulbright programs in mainland China and Hong Kong to closing the Chinese Consulate in Houston. Secretary of State Mike Pompeo, the top US diplomat who is supposed to use diplomacy to resolve differences with other countries, has ironically become the fiercest fighter. He interpreted the hostility between the US and China as between “freedom and tyranny” and revived the ideological conflict. He unveiled the “Clean Network” guidance to crack down on “untrusted Chinese apps” such as TikTok and WeChat.

TikTok’s and WeChat’s experience in the US highlights challenges Chinese businesses face when they attempt to go global. To expand its operation globally, ByteDance has developed two versions of the easy-to-use video-sharing service: Douyin (抖音) for the Chinese domestic market and TikTok for the overseas market. Using a different server for its service and operating outside of China, TikTok evades the stringent Chinese laws on censorship and data-sharing. TikTok does not even have a Chinese name. In early July 2020, after Hong Kong’s national security law was passed, TikTok decided to pull out of Hong Kong, partly to prove that it does not and will not share users’ data with the Chinese government.

On the surface, the US concern seems about privacy and cyber security; the real problem is that the US is afraid of losing the technological competition with China.

A big challenge for ByteDance is that its rise coincides with growing tensions between China and the US. It has become the latest victim of the US-China technological competition. In the name of protecting “national security,” the Trump administration has blocked Chinese high tech companies Huawei and ZTE and now it’s turning to ByteDance and Tencent.

As the international environment becomes more hostile for China following the Covid-19 pandemic, Chinese businesses and investments in the West will undergo more scrutiny by these governments. The inter-agency Committee on Foreign Investment in the United States (CFIUS) has tightened reviews of proposed investment from China after it peaked at $46 billion in 2016. The US government views Chinese businesses’ efforts to go global with suspicion and anxiety. On the surface, the US concern seems about privacy and cyber security; the real problem is that the US is afraid of losing the technological competition with China.

TikTok’s US general manager Vanessa Pappas has suggested that TikTok’s US operation is not going anywhere. It plans to create 10,000 more jobs in the next three years. To refute the accusation that TikTok transfers users’ data to the Chinese government, Pappas stated clearly, “When it comes to safety and security, we’re building the safest app, because we know it’s the right thing to do.”

TikTok was banned by India, its largest market, in June 2020 along with 58 other Chinese apps, as a response to a bloody border clash with China. Just like in India, TikTok and WeChat are caught in the geopolitical feud.

...countries such as Australia will balance their security and economic interests and try to maintain good relations with both the US and China.

Finally, while addressing the Aspen Security Forum in Aspen, Colorado virtually on 4 August 2020, Australian Prime Minister Scott Morrison said that there was no evidence TikTok abused the data of users. A CIA assessment reached the same conclusion that there is no evidence China has accessed TikTok data. Morrison’s contradictory claim from that of the Trump administration suggests that other countries will not necessarily follow the Trump administration in banning TikTok and WeChat.

Like what it did about Huawei, the Trump administration may force other countries to ban TikTok and WeChat by threatening to cut aid or curtail intelligence sharing, but these countries such as Australia will balance their security and economic interests and try to maintain good relations with both the US and China. Regardless of the future of TikTok and WeChat, it is clear that US allies and partners do not want to be put between a rock and a hard place, and everyone hopes that cooler heads will prevail in Washington and Beijing.

Related: US wants it banned while the Chinese calls it a traitor. Is this the end of TikTok? | Chinese companies going global? Take heed of TikTok's crisis | Will TikTok and China continue to embrace the world despite US pressure?