In the wake of US House Speaker Nancy Pelosi’s controversial visit to Taiwan and the mainland’s retaliatory actions in the Taiwan Strait, researcher Wei Da believes that China-US rivalry has transformed in three ways: political confrontation is becoming more ideological and acute; military confrontation is becoming more symbolic; and further decoupling of major economic and trade initiatives may reach a critical point. 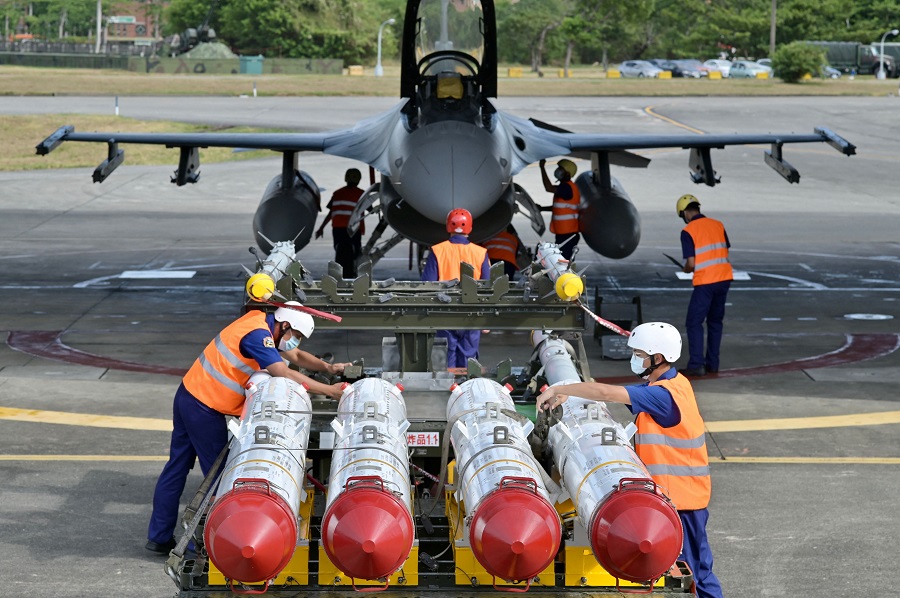 Air Force soldiers prepare to load US-made Harpoon AGM-84 anti-ship missiles in front of an F-16V fighter jet during a drill at Hualien Air Force Base in Taiwan on 17 August 2022. (Sam Yeh/AFP)

Grace Chong - 25 November 2022
China’s resurgence of Covid-19 infections has widened the gap between the young workers opposed to the tightening of controls, and the older generation that feel safer with strict measures in place. Given that the elderly make up a high proportion of the Chinese population, Chinese authorities seem to be holding fast to the dynamic-zero policy. Zaobao correspondent Wong Siew Fong tells us more.
Read more
Translated by Grace Chong on 23 August 2022

US House Speaker Nancy Pelosi's Taiwan visit has transformed China-US competition. As many have noted, Pelosi's rank is significant and she is a Democrat like President Joe Biden. But more importantly, Pelosi represents mainstream US public opinion.

Why did Pelosi insist on visiting Taiwan at this time? Her own beliefs and the state of China-US political confrontation are factors but so are the significant changes in mainstream US public attitudes towards China in recent years.

In the past, China and the US exhibited “mutual hostilities” and ties were antagonistic in the two decades after 1950. These hostilities arose from a severe lack of communication and understanding, with each nation regarding the other as intransigent and having stereotyped impressions of the other. However, the situation is different now.

... the US can maximise its interests and those of its allies as long as it is assured of its two core concerns of democracy and security.

The latest round of China-US hostilities and confrontations surfaced after 40 years of close contact between the two governments and people as well as economic, trade, industrial, social and cultural cooperation. The US’s current China policy and measures are certainly more targeted and precise.

Pelosi’s Taiwan visit demonstrates that the fundamentals of US policy remain unchanged. It does not support Taiwan’s independence, yet it firmly backs democracy in Taiwan and safeguards Taiwan’s security. With the current understanding that it is of little value to intervene in cross-strait sovereignty and party disputes, the US can maximise its interests and those of its allies as long as it is assured of its two core concerns of democracy and security.

... the US’s position and values do not tolerate an extreme ideological confrontation as such ideology exceeds the limits of the US society and culture, and could result in severe conflicts and clashes.

I believe that three major changes in China-US competition have been brought about by Pelosi’s Taiwan visit: political confrontation is becoming more ideological and acute; military confrontation is becoming more symbolic and virtual; and further decoupling of major economic and trade initiatives, with actual consequences, may reach a critical point.

Facing this latest round of China-US tension, after much angst and reflection, the US is finally focusing its efforts on the ideology battle. This is a tussle of ideology and values that is fundamental to China-US schisms and confrontations and not merely a struggle between an emerging superpower and the incumbent. If it were the latter, although the struggle itself may also be intense, it would not be a matter of life-and-death or an irreconcilable zero-sum game, as both parties can coexist regardless of who becomes globally dominant. History has repeatedly proven that the logic of the zero-sum game does not apply to global power status.

However, the US’s position and values do not tolerate an extreme ideological confrontation as such ideology exceeds the limits of the US society and culture, and could result in severe conflicts and clashes. The US has experienced similar struggles against the German, Italian and Japanese fascists during the Second World War; Stalinism and totalitarianism in the Cold War; and Islamic fundamentalism after the September 11 terrorist attacks.

Ideology is a part of human political culture, in which differences and arguments naturally exist among various ideologies. However, extremist ideology, be it extreme left or right, would lead to disastrous consequences. Chinese philosophy has long held that anything done to the extreme will backfire, advocating “the golden mean” or the middle path (中庸之道) that avoids extremes. The 100-year-old Chinese Communist Party (CCP) has experienced and learned from its “three boons and two banes” (三起两落).

The first “boon” was in the early days of the CCP’s founding when it blazed a realistic and feasible trail for China’s revolution and development, after overcoming the dogmatic left and the undiscerning emulation of the Soviet Union experience. The first “bane” was the struggle against the rampant leftists that left it vulnerable to its enemies, completely losing its strongholds and forced to retreat, and the CCP and its forces barely survived.

The Japan-China War united the nation in resistance, during which the CCP rapidly grew with its advocacy of New Democracy (新民主主义) and later established a new political power after it won the Chinese Civil War, culminating in the second “boon”. This was followed by the second “bane” in which a series of extreme Leftist movements and the catastrophic ten-year Cultural Revolution brought the nation to the brink of collapse. In the third “boon”, the CCP implemented reforms and opened up China to the world, bringing order to chaos, modernising the nation and integrating with the global economy.

As the US has built its strength in its core values through overcoming and defeating extremism and radicalism that dotted its history, it is near impossible for extreme ideologies to gain any advantage in its competition against the US.

It has been repeatedly proven that extreme paranoia and leftism lead to self-isolation, internal conflict and decline, creating opportunities for one’s opponents. The magnanimous and inclusive middle path is the way to develop and emerge strongly, forgo the outmoded to assimilate the new, as well as embrace and tap new opportunities.

As the US has built its strength in its core values through overcoming and defeating extremism and radicalism that dotted its history, it is near impossible for extreme ideologies to gain any advantage in its competition against the US.

China alone against Taiwan, the US and Japan

Recently, a US mainstream think tank reportedly worked with defence experts and used advanced technology to conduct several rounds of wargame simulations on a possible future war in the Taiwan Strait. The outcome of the devastating war is a US-Taiwan victory at a huge cost. China responded through a Hong Kong English-language newspaper that China’s war against Taiwan would be a swift one that goes for the jugular and that China would use nuclear weapons if external forces intervened.

If the wargame simulations by the US are somewhat realistic, then China’s response appears to be wishful thinking as it only focuses on China’s intended actions without taking others’ responses into account. Similarly, Russian President Vladimir Putin’s repeated nuclear threats in the Russia-Ukraine war are ineffective as Russia is not the only nation that possesses nuclear weapons.

The Taiwan Strait measures about 150 kilometres in width, while the Battle of Normandy during the Second World War took place across a mere 50 kilometres of ocean channel. Regardless of the progress in military technology, the final outcome of a war in the Taiwan Strait will still depend on a successful amphibious landing, and the beachhead of this war will be the decisive battles at sea.

The People’s Liberation Army’s military doctrine has consistently advocated to not fight a battle that it has no confidence in winning. Both the US wargame simulations and China’s remarks assume that a war in the Taiwan Strait would inevitably lead to China-US and China-Japan military conflicts. This implies that China will fight this war alone on multiple fronts against Taiwan as well as US and Japanese reinforcements, especially at sea and in the air. Is China confident of winning this war?

Evidently, a possible war in the Taiwan Strait has evolved into symbolic gestures and military simulations on both sides, and it would be absurd if war indeed broke out.

There are two other dimensions to a war in the Taiwan Strait besides the confidence to win it. First, will it evolve into a nuclear war, and second, will it be limited to the Taiwan Strait? In short, no convincing victor will emerge from this war. Moreover, if war broke out on China’s doorstep — the southeast coast where the economy and culture are the most developed — it would come at the greatest cost to China.

Evidently, a possible war in the Taiwan Strait has evolved into symbolic gestures and military simulations on both sides, and it would be absurd if war indeed broke out. China’s bottom line is that Taiwan must not declare independence, whereas the bottom line of the US and Japan is that Taiwan must not be attacked. What both sides need to prevent most is the risk of an accident that could spark a military conflict.

Trade and economic decoupling between China and the US has persisted for a while. Recently, decoupling has again accelerated in finance, the equity market and advanced technology, such as semiconductors. The US has also tightened its controls and increased sanctions on Chinese enterprises with Russian connections.

It was previously reported that the US intended to lift tariffs on some Chinese goods but this appears impossible now that inflation is easing in the US and there is a new round of tensions between the two nations in the Taiwan Strait. Meanwhile, China has announced the suspension of beef imports from some US firms and many Chinese state-owned enterprises have decided to delist from Wall Street.

... the Chinese economy is now at a disadvantage amid continuous decoupling and a reversal in its integration with global supply chains.

Recent news have reported a weak domestic Chinese consumer market, occasional crumbling in China’s real estate industry, the beginnings of a bank run crisis in China’s financial industry, and many Chinese entrepreneurs resorting to relocation or wrapping up their businesses.

China must be cautious with the current situation and trend for global capital, supply chains and entrepreneurs voting with their feet. As Deng Xiaoping said: “Development is the top priority." No one can argue against this and none can afford to lose.