Tensions in the Taiwan Strait have intensified after US House Speaker Nancy Pelosi’s Taiwan visit and the Chinese People’s Liberation Army’s military exercises encircling Taiwan. Taiwanese commentator Chen Kuohsiang assesses that a war in the Taiwan Strait would have implications for the Asia-Pacific region that go beyond geopolitics. 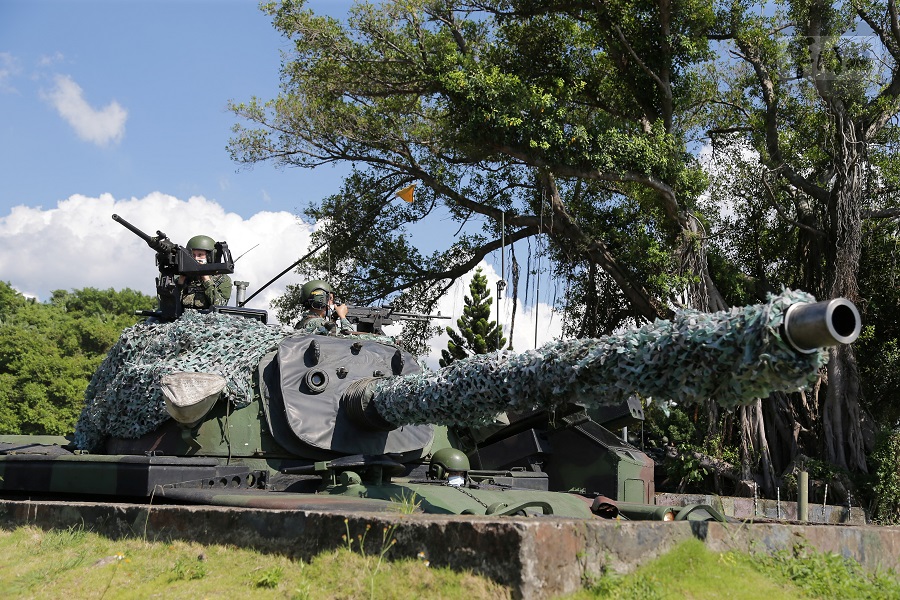 Taiwanese soldiers operate a CM-11 tank simulating firing during a military drill at an undisclosed location in Taiwan, 8 August 2022 in this handout picture released on 10 August 2022. (Taiwan Military News Agency/Handout via Reuters)

Grace Chong - 27 January 2023
Regulators are ramping up efforts to cull poorly performing firms and those that violate the rules or break the law. A record number of companies got the boot from Chinese mainland stock exchanges last year, and that number could even double in 2023.
Read more
Translated by Grace Chong on 17 August 2022

US House Speaker Nancy Pelosi’s visit to Taiwan has provoked the Chinese Communist Party (CCP) to conduct military drills around Taiwan as a deterrent, with the Chinese People’s Liberation Army (PLA) launching missiles over Taiwan while its aircraft and warships crossed the median line of the Taiwan Strait. The course of events has fundamentally changed cross-strait relations, the geopolitical environment, Asia-Pacific’s situation and global power dynamics.

The CCP’s eight countermeasures to halt military and climate cooperation and talks with the US have weakened the guardrails between the two powers. Extending the military drills only worsened the situation.

The PLA could have attacked Taiwan with its aircraft and missiles, instantaneously turning the encirclement into a real war.

Risk of friction or miscalculation

The PLA’s encirclement exercise resembles an attack simulation, essentially claiming sovereignty over Taiwan by locking down the island, depriving it of its strategic manoeuvring space and restricting the US’s support from the east. The PLA could have attacked Taiwan with its aircraft and missiles, instantaneously turning the encirclement into a real war. Indeed, the new status quo in the Taiwan Strait is more dangerous than ever.

Taiwan and the US were deterred, while Japan, which claimed that a “Taiwan emergency is a Japanese emergency”, was also affected — five ballistic missiles apparently landed in Japan’s exclusive economic zone while a Chinese military drone flew through Okinawa’s Miyako Strait, in a show of China’s military prowess in counter-interventions.

The CCP’s countermeasures against the US and Taiwan are clearly more forceful than expected, especially the cancellation of China-US theatre commander talks and the military maritime security consultative mechanism. This would greatly increase the risk of friction and miscalculations between the two militaries in the Taiwan Strait or the South China Sea, and exacerbate volatility in the Indo-Pacific region.

The new status quo brought about by tensions in the Taiwan Strait has put Taiwan and the Asia-Pacific region under great geopolitical pressure, with mainland China gaining the strategic advantage.

A CCP mouthpiece claimed that the “all-out drill” by five of the PLA forces achieved ten breakthroughs. Aside from such propaganda from the Chinese side, American strategic experts also analysed that China’s encirclement exercise accomplished several objectives — it undermines the morale and support for Taiwan President Tsai Ing-wen among Taiwan’s public; drives a wedge between Taipei and Washington; deters countries from supporting Taiwan; rehearsed a variety of military operations that could form part of a larger military operation; prevents potential third-country intervention in a China-Taiwan conflict; erases the notion of the median line that divides the strait; and establishes a new normal in which the PLA no longer respects Taiwan’s claims to a separate airspace and territorial waters.

A war in the Taiwan Strait would involve or affect the entire Asia-Pacific region, and would eclipse the current war in Ukraine.

In a Wall Street Journal commentary, two American academics warned that the US is “running out of time to prevent a cataclysmic war in the Western Pacific” as Chinese President Xi Jinping “appears to be preparing for an even more consequential onslaught against Taiwan”. A war in the Taiwan Strait would involve or affect the entire Asia-Pacific region, and would eclipse the current war in Ukraine.

The CCP is convinced that Taiwan has become a tool for the US to contain the mainland, as the two work towards establishing official relations while Taiwan’s ruling Democratic Progressive Party continues to rely on the US to seek "Taiwan independence". As Beijing feels cornered, it believes that the situation will spin out of control if it does not counterattack.

However, its extensive military exercises have convinced the US, Taiwan and other countries that China will clearly use force to achieve its strategic goals, and thus must be contained with even harsher measures. Ultimately, war becomes inevitable amid escalating tensions.

Are the US, Taiwan and Indo-Pacific countries ready to face the new normal?

The US’s military presence in the Pacific remains concentrated in large bases such as Guam and Okinawa, which the PLA’s missiles can readily attack. And Taiwan would not last long under air and sea attacks from the Chinese. How then could the US assist Taiwan in an effective and timely manner?

US military experts believe that the Taiwan Strait should be turned into “the attacker’s death trap” by placing massive amounts of missiles, drones and electronic warfare equipment in the vicinity surrounding the Taiwan Strait to deter the Chinese military from stepping into this high-tech minefield and risk triggering it.

Beijing’s first strike must fail; otherwise, a protracted and arduous war will ensue. However, these are easier said than done and are time-consuming and resource-intensive — can the US’s already cash-strapped military complete all these in time?

The US military should also guard against the destruction of military bases in the Indo-Pacific region and spread out to other smaller bases in East Asia, while enhancing the defence capability of its larger bases to avoid being paralysed by a mainland missile offensive.

In sum, Beijing’s first strike must fail; otherwise, a protracted and arduous war will ensue. However, these are easier said than done and are time-consuming and resource-intensive — can the US’s already cash-strapped military complete all these in time?

... economic and trade relations, as well as supply chain integrity, will also be threatened.

Impact on regional economy and trade

If peace and stability cannot be maintained in the Taiwan Strait, the impact on the Indo-Pacific region will not be limited to military interference and geopolitical pressure; economic and trade relations, as well as supply chain integrity, will also be threatened.

The CCP has already imposed a comprehensive import ban on Taiwan’s agriculture, fishing and food industries. The next target could be the Economic Cooperation Framework Agreement. If so, the impact of geopolitical tensions on cross-strait trade and commerce will spread, disrupting the operation of the supply chain, threatening the smooth operation of cross-strait and Indo-Pacific trade and business, and global supply chains would be forced to restructure or risk breaking down.

As economic and trade ties among Asian countries have become increasingly integrated, they are asserting a greater influence on global industrial operations and share weal and woe with other regions. Thus, everyone has a part to play in avoiding conflict in the Taiwan Strait and ensuring stability in the Indo-Pacific region.