The voting mechanism for elimination variety shows in China nowadays demands fans to put their money where their mouth is — pushing their favourites up the ranks with “support” that can be bought in cash. Clever marketing tactics by sponsors or a slippery slope bordering on exploitation? 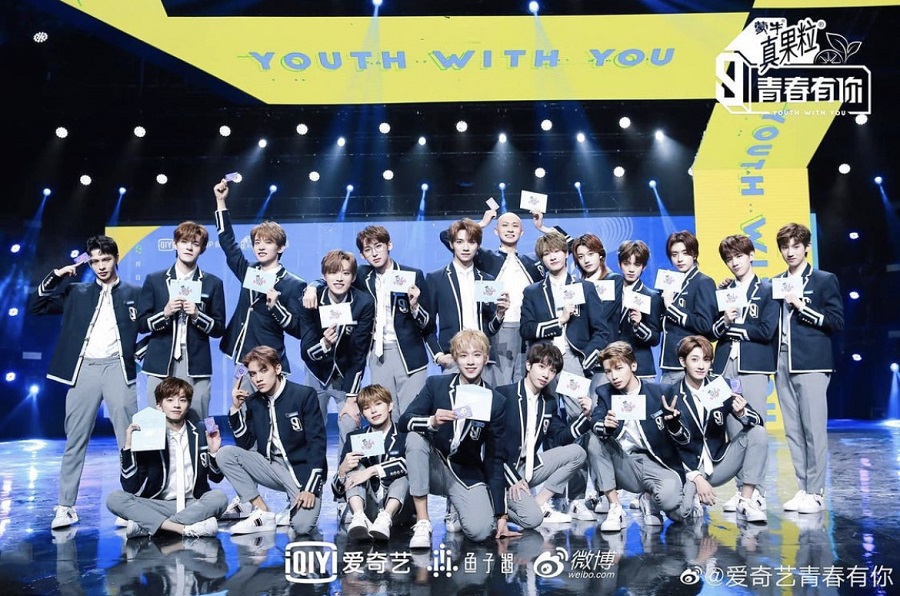 Trainees of Youth With You (Season 3) at a fan meet. (Weibo)

Grace Chong - 2 August 2022
Taiwanese commentator Chen Kuohsiang believes that China’s economy is under threat, with the unravelling of intertwining issues in the financial industry, property sector and government finances that cannot be easily resolved. How will China boost its investment-led economy, push down unemployment rates, and regain consumer and investor confidence?
Read more
Translated by Grace Chong on 6 May 2021

Three days before the grand finale, Chinese boy group elimination show Youth With You (Season 3) was suddenly suspended. The news, which broke at midnight, soared to the top of Weibo’s trending searches, attracting over 300 million views in just a few hours.

The impact of this suspension on the variety show world was as earth-shattering as that of Ant Group’s suspended IPO on the stock market. Not only were zealous fans who rushed to vote for their favourite trainees caught off guard, netizens who did not watch the show exclaimed that this was the “first time” such a thing has happened. Some even lamented that such variety shows have finally “crashed and burned”.

According to a statement from the Beijing Municipal Bureau of Radio and Television, after receiving complaints from the public, the authorities met with producers from iQIYI, and thereafter ordered the show to stop recording and to make the appropriate changes and rectifications. While the officials did not explicitly state the exact problems with the show, public speculation alluded to the recent controversial “milk dumping” incident.

Such deplorable behaviour of keeping the bottle caps while pouring away the contents of the drinks triggered a strong backlash.

Showing love at all costs

Last week, just as China officially adopted a law against food waste, a video of fans hiring people to dump milk went viral. The video showed a group of people milling around a sewer, splitting up cartons of dairy beverages between them to pour down the drain. Behind the crowd, hundreds of cartons of dairy products stood stacked up as high as a wall, waiting their turn to be dumped.

This unimaginable scene is all due to Youth With You’s voting mechanism. Fans vote for their favourite trainees by purchasing dairy beverages from the show’s main sponsor and scanning the QR code inside the bottle caps of these drinks. To support their favourite trainees and to push them up the ranks, fans not only spend huge amounts of money to buy large amounts of beverages, but also hire people to open the bottles and scan the code. But as they are unable to drink all the milk or resell them after the bottles have been opened, they simply pour the milk away.

Such deplorable behaviour of keeping the bottle caps while pouring away the contents of the drinks triggered a strong backlash. Even Xinhua News Agency posted a commentary criticising the sponsor’s marketing method of tying votes to their products, saying that they have not only poured milk down the drain but also misled the young and eroded their values.

Others are also guessing that the real reason behind the show’s suspension is because the parents of top-ranking trainee Tony Yu Jingtian have been accused of running a karaoke business that is suspected of being involved in drug trafficking and prostitution. Although his management company issued a statement refuting the rumours, some netizens still demanded that he be taken off the show.

In response, Yu’s fans announced that they would double their voting efforts to ensure that Yu debuts in first place and wins the “centre” position. A female fan even revealed that she took a “naked loan” (using nude photographs as collateral) of 10,000 RMB (roughly S$2,066) to vote for Yu. However, just as the programme announced that recording would be suspended, Yu’s management company announced that he would be withdrawing from the competition.

Getting out of hand

Whatever the real reasons behind the suspension of the programme, the authorities’ order to stop the programme shows that the marketing model of these programmes has gotten out of hand and is fast reaching the regulatory redline. The multi-level marketing and religious cultish nature of fandom culture has once again caught public attention.

Compared to the primitive one-person-one-vote, crowdfunding and buying designated merchandise in bulk at special prices is seen as more effective, making crowdfunding campaigns to garner votes the standard model for talent shows.

... fans of the 25 finalists forked out a total of 150 million RMB, or 6.13 million RMB per contestant — enough to buy an apartment in first-tier cities like Beijing and Shanghai.

Apart from spending money to vote, fans also double up as “number boosters” to engage in publicity and hype on social media, and prove contestants’ commercial value through shares, comments, and likes. This is also a marketing method for talent shows — during the recording period, the contestants with the most shares, comments, and likes will get additional screen time and advertising opportunities.

Turning intangible popularity into votes worth money and visible figures is a marketing method unique to talent shows. Besides being manipulated by how the show works, fans are also subject to peer pressure: those who do not contribute enough money or do not work hard enough to boost numbers may be ostracised and lose their standing in the group. Some students with limited funds are turning to online loans just to give “face” to their idols.

One of the first talent shows in China — Super Girl, back in the 2000s — engaged the whole nation with its “no threshold”, one-person-one-text voting system, and was once seen as “democracy in action” in the entertainment scene.

Chasing idols is not a sin in itself; it is an important way for many people to satisfy their emotional needs and get some mental solace. One of the first talent shows in China — Super Girl, back in the 2000s — engaged the whole nation with its “no threshold”, one-person-one-text voting system, and was once seen as “democracy in action” in the entertainment scene. But as fans’ economic ability grows and evolves, audiences who think they control the fates of contestants have now become figurative chives to be harvested by various platforms and businesses.

Will talent shows that are currently heading out of control be revamped with intervention by the authorities, or will they be blacklisted and disappear? It is not just the legions of young female fans who await an answer.

Related: Working 'mothers' are the biggest spenders of fan economy in China | Internetisation of life and the new social divide | Online lending is feeding the insatiable purchasing desire of Chinese youths