The UK's 'tilt' towards the Indo-Pacific may not be sustainable

The UK has launched a robust “tilt” towards the Indo-Pacific. To its credit, it has executed a series of high-profile diplomatic engagements and military deployments to the region. The question, however, is not about London’s desire to engage with the dynamic region but whether this tilt can be sustained. 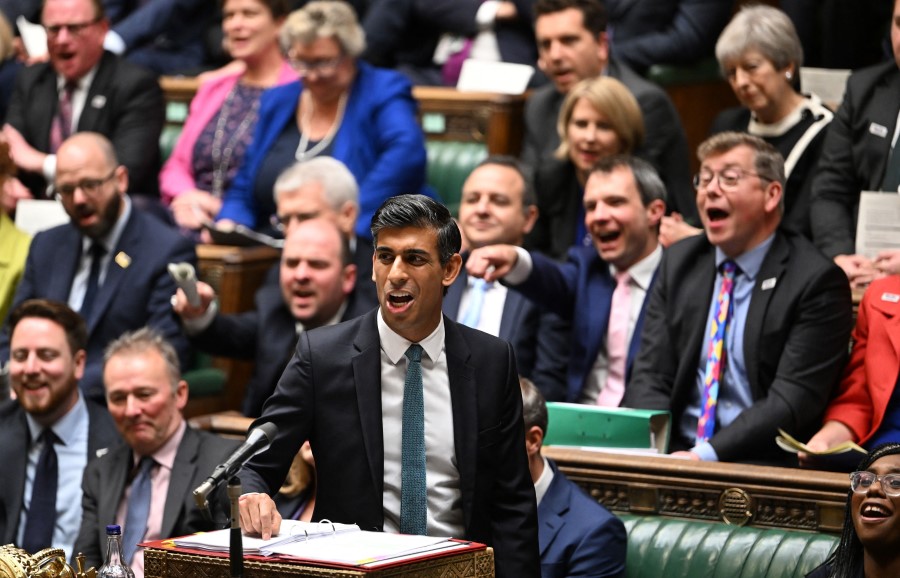 A handout photograph released by the UK Parliament shows Britain's Prime Minister Rishi Sunak speaking during his first Prime Minister's Questions (PMQs) in the House of Commons in London on 26 October 2022. (Jessica Taylor/AFP)

Candice Chan - 30 January 2023
A mall in Shenzhen came under fire for putting up white lanterns with black text as part of its Chinese New Year decorations, while an “ugly” rabbit-shaped light decoration was removed from another mall in Chongqing. Academic Zhang Tiankan muses on tradition and innovation, and the evolution of traditional decorations.
Read more
Translated by Candice Chan on 27 October 2022

At the 2019 Shangri-La Dialogue in Singapore, then French Armed Forces Minister Florence Parly came with not only her own entourage but also an entire carrier strike group, including the Charles de Gaulle aircraft carrier, with its destroyers, tankers, 20 Rafale fighters, and helicopters. Speaking at the event, Ms Parly jokingly hoped that the UK “would be kind enough not to reciprocate”.

Fast forward a couple of years and the UK has “reciprocated” with a vengeance. In 2021, it launched a “tilt” towards the Indo-Pacific and deployed its Carrier Strike Group (CSG) led by HMS Queen Elizabeth to the region. This year, the UK installed a “persistent presence” consisting of two Royal Navy offshore patrol vessels in the Indo-Pacific. This will be followed by a Royal Navy Littoral Response Group in 2023 (comprising an amphibious assault ship and either a frigate or a destroyer) and a new Type 31 frigate sometime in the late 2020s.

The UK has redoubled its defence ties with the region. At the 50th anniversary of the Five Power Defence Arrangements (FPDA), the UK and its four partners — Malaysia, Singapore, Australia and New Zealand — took part in the October 2021 Exercise Bersama Lima Gold exercise. Separately, the AUKUS (Australia-UK-US) deal announced in 2021 tied the UK to the future development of Australia’s nuclear-powered submarines.

... the 2022 State of Southeast Asia Survey, which ranked the UK behind the US, China, ASEAN, the European Union, and even Japan when it comes to leadership in championing global free trade, maintaining a rules-based order, and upholding international law.

London has also pushed forward on the diplomatic front. In August 2021, the UK was admitted as an ASEAN dialogue partner. The following year, Foreign Secretary James Cleverly visited Singapore to underscore the UK’s partnership with Singapore and the Indo-Pacific region. Similar messages were delivered by senior officials during their visits to the region, including former Cabinet Secretary Sir Mark Sedwill.

Question mark about ability to fund commitments in Indo-Pacific

The UK’s Indo-Pacific "tilt" is well documented. The March 2021 landmark policy paper, "Global Britain in a Competitive Age" highlighted for the first time the UK’s tilt to the Indo-Pacific. In August 2022, the UK issued its five-year National Strategy for Maritime Security, a 112-page document focused on maintaining a “free, open and secure” Indo-Pacific — using similar terminology seen in policies of its partners like the US and the Quadrilateral Security Dialogue’s Australia, Japan and India.

Today, there are similar concerns about the UK’s ability to fund its commitments to the Indo-Pacific as it needs to focus more, logically, on NATO and Europe, to deal with a bellicose Russia.

That said, the UK’s “tilt” will meet certain challenges. In Southeast Asia, people with long memories will still view the UK as a former colonial power. For instance, one Singapore analyst noted that AUKUS is a “white, neo-colonialist” idea that has less appeal to the region. Although his view may not resound with all Southeast Asians, London should be mindful of potential pitfalls from this historical baggage when projecting its power in the region.

Another indicator of regional perceptions is the 2022 State of Southeast Asia Survey, which ranked the UK behind the US, China, ASEAN, the European Union, and even Japan when it comes to leadership in championing global free trade, maintaining a rules-based order, and upholding international law.

For London, any regional engagement will remain operative as long as it serves the UK’s national interests and is sustainable. The obverse is also true: a classic example is London’s 1967 “East of Suez” decision to withdraw all its troops from its Far East Command (which included Singapore) after constrained post-war finances crimped defence spending. Today, there are similar concerns about the UK’s ability to fund its commitments to the Indo-Pacific as it needs to focus more, logically, on NATO and Europe, to deal with a bellicose Russia.

Given the latest news from Downing Street, however, the biggest challenge to the UK’s Indo-Pacific tilt lies closer to home.

The UK’s heavy involvement in supporting Ukraine in its war against Russia will have knock-on effects on how many resources London will be able to commit to Asia. In the event of a conflict in Asia, say over Taiwan or the South China Sea, the jury is still out as to whether London would be able to commit any significant military resources in addition to the expected diplomatic signalling depending on how such conflict occurs. It is highly unlikely that British defence officials would say “No” to Washington if the latter puts out a request, but the eventual shape or form of the UK’s military commitment or deployment remains unknown.

Given the latest news from Downing Street, however, the biggest challenge to the UK’s Indo-Pacific tilt lies closer to home. The country is now grappling with multiple challenges, including spiralling costs of living and inflation triggered by the Ukraine crisis. On 23 September, the then Chancellor of the Exchequer Kwasi Kwarteng unveiled the biggest tax cuts in a century, causing the British pound and government debt to tank. The resultant loss of confidence in the pound and government quickly led to the resignation of Prime Minister Liz Truss on 20 October. Rishi Sunak, who was defeated by Ms Truss in party polls for the top job in July, has become the UK’s new prime minister. Whether Sunak will have the energy to wholeheartedly support London’s tilt to the Indo-Pacific while having multiple pots on the domestic front burner remains to be seen.

The fiscal difficulties facing London will compound matters for the UK’s demand for “unaffordable” future military equipment plans. Ms Truss had pledged to raise defence spending from the current levels of 2% of GDP to 2.5% by 2026 and 3% by 2030. The current Chancellor Mr Jeremy Hunt, however, has refused to be drawn into saying whether this promise would be upheld. Essentially, London’s commitments to the Indo-Pacific could totter due to these fiscal constraints.

In the end, the question is not about London’s motivation to engage more deeply in the Indo-Pacific but whether the tilt could be sustained. The UK’s desire to engage in the region might be outrunning its ability to underwrite its diplomatic and defence engagements.

Related: AUKUS: Aggravating tensions and dividing the world | The EU in the Indo-Pacific: A new strategy with implications for ASEAN | D10 group of democracies: A stronger alliance to contain China? | How the Ukraine war will reshape the EU’s approach to China and Indo-Pacific