With the easing of Covid measures in China, many cities saw the return of New Year countdown celebrations, with major crowds congregating in droves. While the mood is upbeat, worries remain. Lianhe Zaobao’s China Desk looks at the people’s hopes for 2023. 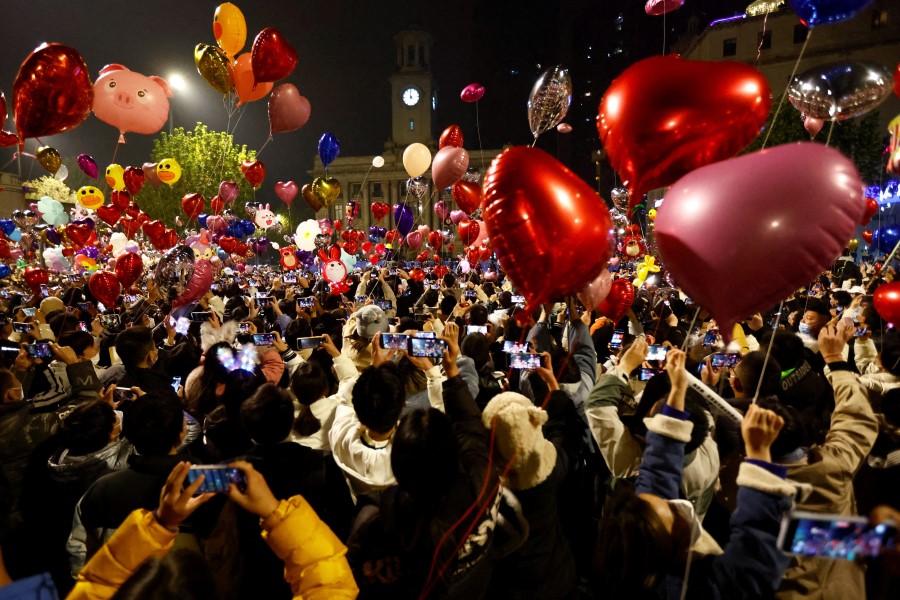 Candice Chan - 30 January 2023
A mall in Shenzhen came under fire for putting up white lanterns with black text as part of its Chinese New Year decorations, while an “ugly” rabbit-shaped light decoration was removed from another mall in Chongqing. Academic Zhang Tiankan muses on tradition and innovation, and the evolution of traditional decorations.
Read more
Translated by Candice Chan on 5 January 2023

On 31 December, many Chinese cities were engulfed in crowded countdown celebrations. The outburst of emotion felt like people were bidding a hearty goodbye to three years of strict Covid controls.

In the capital Beijing, at sub-zero temperatures and Covid running rampant, people seemed oblivious, congregating in swarms at major commercial areas to admire the colourful new year lights and decorations.

Nearby Shijiazhuang saw the return of long-absent scenes of people — especially young people — hitting the streets for the countdown, with thousands of balloons released in celebration.

As one of China’s most populous and economically developed cities, Shanghai also saw a New Year’s Eve crowd, with popular spots like the Bund and Nanjing Road packed with people. However, perhaps with the hindsight of the crowd crush during the 2014 countdown, Shanghai deployed armed police to maintain order, even forming a human chain.

Wuhan city centre was also jam packed. Some people turned up in wacky clothes, but almost everyone wore a mask.

Reuters quoted a woman in Wuhan surnamed Jin, saying that she had been infected before and was worried she might get reinfected. “I am scared to be out tonight, but I still wanted to come out because everyone is out.” Wuhan is where Covid first broke out.

A 17-year-old high school student in Wuhan surnamed Wang said: “I feel Covid has been really bad over the past year. Some of my family members have been hospitalised. I hope they will be healthy in the new year. That is the most important thing.”

... some people cannot feel this optimism, especially since many areas are still hit hard by Covid, with a shortage of medicines and hospitals and funeral parlours packed.

Several other netizens hoped that life would go back to normal as soon as possible in the new year. Wuhan resident Chen Mei, 45, said she hoped her daughter’s in-person classes at school would not be disrupted: “Online classes are not an effective way to learn.”

All over China, many people have expressed similar hopes on social media. However, some people cannot feel this optimism, especially since many areas are still hit hard by Covid, with a shortage of medicines and hospitals and funeral parlours packed. Also, the government is no longer providing reliable figures and estimates of infections and deaths, sparking worries about the scale of the outbreak and the government’s credibility.

The six-minute video begins with the line: “What shared memories do we have of 2022?” before showing images of the messy lockdowns in various parts of China...

Following the removal of a controversial video from the Chinese web portal NetEase last week, such anxieties have been played up, and have evolved into anger and discontent.

hk01 and Reuters reported that on 29 December, NetEase released a video summary of 2022, titled “Why Not Live in the Present, Rather Than Dream of the Vast Expanse of Stars and Sea?”

The six-minute video begins with the line: “What shared memories do we have of 2022?” before showing images of the messy lockdowns in various parts of China, including an old man in China being dragged off to a makeshift hospital because his wife was infected, and apologising to neighbours on a WeChat group for getting sick; a child running a fever of 40 degrees Celsius and the mother going door to door asking for fever medicine; Covid control personnel surrounding and beating a resident in Xi’an who went out to buy buns; a single-living elderly person in their seventies breaking down because they did not know how to order groceries with their mobile phone during lockdown; a delivery driver on his knees crying on hearing that his mother was critically ill, but he could not go home due to Covid controls; a young boy pulling his severely ill grandmother on a wooden cart to get tested.

The chained-up woman in Xuzhou, Jiangsu; the assaults at a barbecue shop in Tangshan, Hebei; the fire at a residential block in Urumqi that led to ten people dead and nine injured — all these were also featured in the video.

Netizens criticised on Weibo: “This is a true record of what we went through, why delete it?”

The video ended with the lines: “People do not live by lifetimes; they do not live by years, or months, or days. They live by moments. As we bid goodbye to 2022, let us live in the present. It has been a difficult time. See you next year; we salute every ordinary person who is bearing up in life.”

According to reports, the video immediately went viral on China’s social media platforms, but was soon deleted, with “404” and “video not found” messages in place.

Netizens criticised on Weibo: “This is a true record of what we went through, why delete it?”

“As the world changes, can we only sing praises of so-called positive things?”

“Why is my face wet with tears? There is no grand narrative here, only the ups and downs of individual lives.”

So far, as the originator of the video, NetEase has given no explanation.

Reuters analysed that the video’s disappearance suggests that the Chinese government still sees the narrative surrounding its management of Covid-19 as a politically sensitive issue.

This can be seen from the top ten China news stories of 2022 selected by Chinese state media Xinhua News Agency on 29 December:

7) China’s efforts in improving people’s livelihood and bringing benefits to every household;

10) China’s adjustment of its Covid-19 response in a science-based and targeted manner.

It says in the article that in terms of improving people’s livelihood and bringing benefits to every household, despite Covid-19 resurgences and economic pressure, the Central Committee of the CCP and the State Council stayed the course and rolled out a series of concrete measures to achieve this mission.

Then in 274 words, it summarised China’s adjustment of its Covid-19 response, reiterating that in the face of a “constantly mutating novel coronavirus”, the Central Committee with Comrade Xi Jinping at the core has always put “people’s lives and health first”, and optimised its Covid-19 response policies in a dynamic manner.

Given the official advocacy of “positive energy”, it is no wonder that the NetEase video was removed.

The report also mentioned how China went from announcing the 20 optimised measures to the ten new measures, before finally downgrading its level of Covid-19 management from the current Class A to Class B.

In doing so, in December 2022, China swiftly removed numerous Covid-19 restrictions that have shackled people’s lives in the last three years, including mass testing, lockdowns, and quarantines. The Chinese government also said that it would ease the remaining restrictions, including cross-border travel restrictions.

Prior to this, widespread protests or the “white paper revolution” had broken out in various Chinese regions in November 2022. The protests were not featured either in Xinhua’s top ten China news stories or the NetEase video. However, the latter included footage from the Urumqi residential block fire, which the outside world generally considers the trigger of the “white paper revolution”. Given the official advocacy of “positive energy”, it is no wonder that the NetEase video was removed.

He [Xi] further said, “Let’s make an extra effort to pull through, as perseverance and solidarity mean victory.”

However, when Xi delivered his annual new year address on 31 December 2022, he indirectly admitted that the country’s handling of the pandemic has resulted in a public opinion backlash. He said, “Ours is a big country. It is only natural for different people to have different concerns or hold different views on the same issue. What matters is that we build consensus through communication and consultation. When the 1.4 billion Chinese work with one heart and one mind, and stand in unity with a strong will, no task will be impossible and no difficulty insurmountable.”

The Wall Street Journal reported that Xi had earlier told a visiting European Union delegation that the protests were mainly initiated by students and reflected frustration about three years of Covid-related restrictions.

In his New Year’s Day address, Xi said, “Since Covid-19 struck, we have put the people first and put life first all along. Following a science-based and targeted approach, we have adapted our Covid response in light of the evolving situation to protect the life and health of the people to the greatest extent possible.”

He further said, “Let’s make an extra effort to pull through, as perseverance and solidarity mean victory.”

Otherwise, everything is but empty talk, disappearing into the boundless universe.

Chinese state media Global Times also published an upbeat commentary on 29 December 2022 remarking that challenges are not easily overcome and many people are still fighting Covid-19 at this moment. However, China is a major power that best knows where it is at and where it is headed.

The article predicted that 2023 will not be a smooth year as well, as China must now find a way to better integrate epidemic prevention and control with economic and social development, and needs to overcome many more hurdles.

The article did not mention how China will overcome these hurdles. But one can be sure that it will involve the use of scientific measures to tackle extraordinary circumstances, including bolstering vaccination among its senior citizens in particular, and sharing the genome sequencing of the virus with international society. Otherwise, everything is but empty talk, disappearing into the boundless universe.

This article was first published in Lianhe Zaobao as “狂欢背后的星辰大海”.

Related: How China bolted from zero Covid towards herd immunity | China prepares for Covid peaks in January | From zero-Covid to living with the virus: Chinese society's adaptability put to the test | Will mainland China see a 'tsunami' of Covid cases? | What can we expect now that China’s ‘zero-Covid’ is no more | Covid protests: A repressed China needs an outlet to return to equilibrium