US-based researcher Wei Da notes that many in China believe the US will soon be in chaos following an unsettled 2020 US presidential election. He says that while the election has indeed highlighted the widening chasm in the US between conservatism and liberalism, and brought forth calls for change in the electoral system, the US remains a leader and pioneer in seeking out new and innovative ways to advance civilised societies. 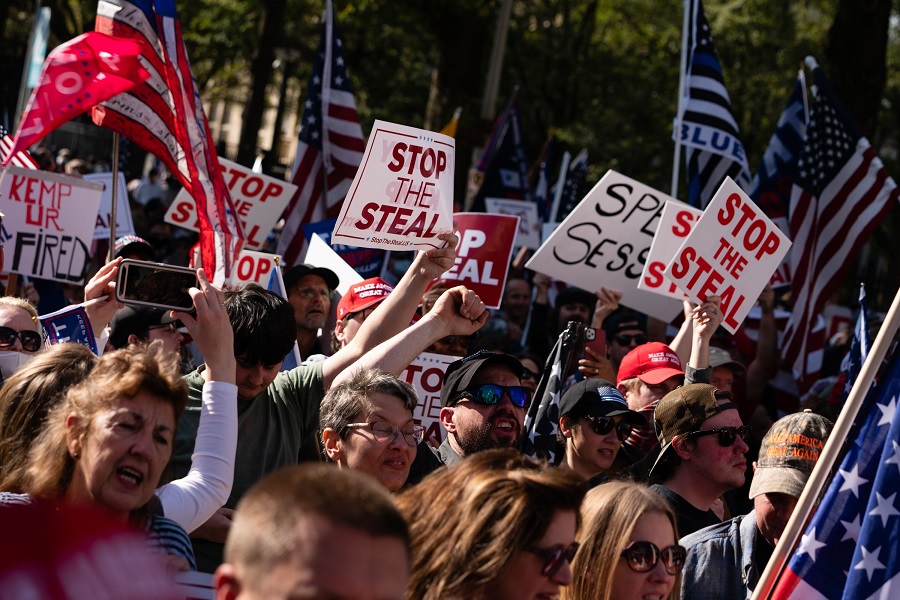 Protesters rally outside the Georgia State Capitol against the results of the 2020 Presidential election on 21 November 2020 in Atlanta, Georgia. (Elijah Nouvelage/Getty Images/AFP)

Grace Chong - 5 December 2022
Through the eyes of her cat Pudding, Beijinger Lorna Wei gives a snapshot of her daily life when her residential building went under lockdown last week.
Read more
Translated by Grace Chong on 8 December 2020

The world seems more anxious than the Americans themselves that the US election results are yet to be finalised. Of course, there are some spectators out there, predicting that the US is on the brink of chaos. But this is just a misperception and a case of using one’s own yardstick to measure another person’s situation. These people forget that their cultural backgrounds and developmental stages are vastly different from that of the US.

Under a system that stores wealth among the people and returns power to the people, Americans have long gotten used to leading themselves at the individual, family, and corporate level, and playing their role in every unit of society. Thus, the country will not fall into chaos just because of a stalemate in the presidential elections. Even if there is some grassroots agitation, US society will continue to function; the country’s powerful middle class and a strong tradition of rule of law will provide ballast.

Trump and Biden are leading the fierce collision and development of two major ideologies — conservatism and liberalism. In the international political context, they are leading the confrontation and battle between universal values and exceptionalism, or appeasement and compromise.

An ideological battle within the US is underway

That said, frankly speaking, the hurdle that the US is facing in this election is indeed high and will need much work to cross. This hurdle is not merely that of the battle between Donald Trump and Joe Biden for the presidency. The current situation is vastly different from the deadlock faced by George W. Bush and Al Gore during the 2000 US presidential election. Back then, Bush and Gore were simply engaged in the usual fight between the two main political parties of the land. The political, social, and cultural ideologies that they both held were not entirely different from one another. That is to say, while competition between them was intense, the ideological battle between them was mild. In other words, the electoral contest was at a “purely technical” level.

However, the stalemate that Trump and Biden are in right now clearly goes beyond the party or the individual. According to US public opinion, in the American political context, Trump and Biden are leading the fierce collision and development of two major ideologies — conservatism and liberalism. In the international political context, they are leading the confrontation and battle between universal values and exceptionalism, or appeasement and compromise. The gains of success, as well as the cost of defeat, are truly very high and hefty. This is a classic case of the circumstances being more determinant than the players involved.

A Chinese saying goes that “each generation has its own mission”. The US is no exception. Moreover, people with a strong sense of mission will not easily admit defeat. Biden already has 40 years of political experience — we do not know what his sense of mission is and how strong it is yet. On the other hand, Trump is a dark horse in the political arena and has a business background. He has been forming his own unique insights and vision of American politics, the political arena, and policies since the 1980s. We shall wait and see if this dark horse has miscalculated and failed or is still pushing its way forward.

Overhaul of US electoral system likely

The 2020 US presidential election has also clearly gone beyond a “purely technical” contest and will likely bring about major changes and reforms to the electoral system, procedures and regulations that have been maintained for more than 245 years in the US. Going by the results that have been tallied thus far, one observation is clear: based on on-site voting record statistics on election day, Trump would have won; based on continued tabulations of mail-in ballots after election day, Biden is in the lead.

According to past electoral norms, most voters vote on-site, with mail-in ballots only accounting for the minority of votes. However, due to unforeseen circumstances in 2020 with the outbreak of the Covid-19 coronavirus, mail-in ballots accounted for almost half of the total votes. The key to the current dispute and stalemate lies in the likelihood of there being serious loopholes and cheating in large-scale mail ballot operations.*

Due to the scale of the US presidential elections, disallowing mail-in voting is impractical, but from now on, stricter regulatory, anti-counterfeit and verification measures for mail-in ballots will definitely be put in place.

Interestingly, for the longest time, other countries have been learning from America’s established electoral system. Now, the US needs to do some innovating of its own. Taiwan’s electoral regulations and laws, for instance, forbid absentee voting, in order to eliminate procedural loopholes and risks associated with cheating to the largest extent. Due to the scale of the US presidential elections, disallowing mail-in voting is impractical, but from now on, stricter regulatory, anti-counterfeit and verification measures for mail-in ballots will definitely be put in place.

The next crucial date in the US presidential elections is 14 December, when electors under the electoral college system meet in their respective states to formally vote for the next US president. Based on past experience, the electors of each state act according to the voting results of their state, effectively stamping their seal of approval on the will of the people. However, should any elector think that there may be cheating involved during the voting process of their respective states, that is, if there are great discrepancies in the people’s vote, then they could possibly make a decision based on their own judgement.

The electoral college system was put in place by the US’s founding fathers as another line of defence to prevent possible problems and cheating in the general elections. The world is watching to see if this system will play a unique and significant role in the 2020 presidential elections.

Politics, systems, and power are ancient yet everlasting topics in human civilisation, and civilised societies must have civilised and rational answers to these topics. In the 21st century of today, the US will remain the leader and pioneer of the world.

*According to an NPR report, more votes were cast in the 2020 US presidential election than in any other US election, and the turnout rate was the highest in more than a century. The final vote total is likely to get to about 158 million. A report by the Pew Research Center adds that about 65 million votes were cast via mail ballot (absentee voting). In related findings, two-thirds of Trump voters say they voted in person, compared to 42% of Biden voters. Conversely, Biden voters are nearly twice as likely than Trump voters to say that they voted by mail.

Related: Can Biden’s US lead the world? | US vs China: Who is more resilient? | Liberalism and globalisation serves the elites; the world needs a return to the nation state | Donald Trump: The true 'Monkey King'