Washington threatening Portugal to choose between China and the US?

Portugal has in the past decade developed very lucrative relations with China. Chinese investment significantly assisted its recovery from the 2008 global economic crisis. However, Lisbon’s increasingly close ties with Beijing have raised serious concerns in Washington. 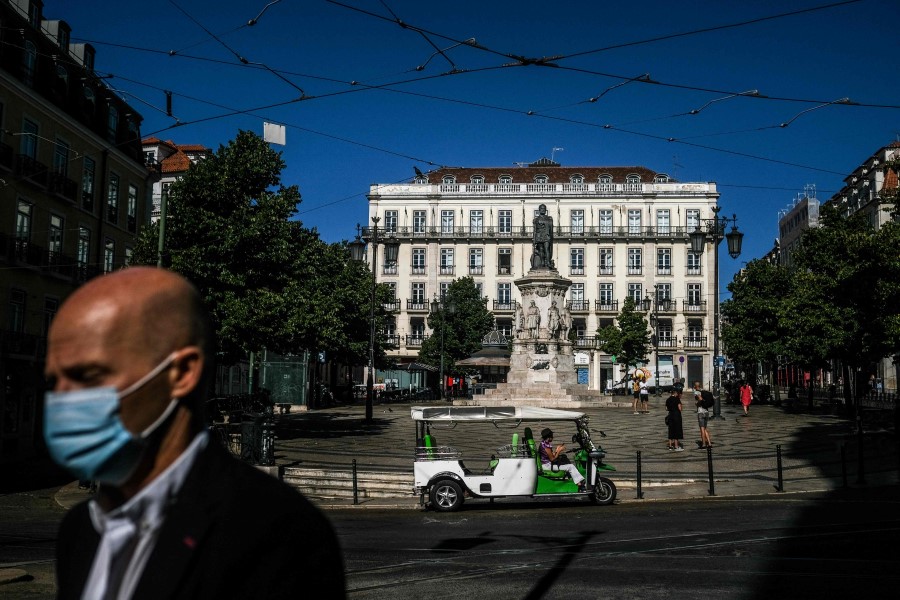 A tuktuk is parked at Camoes square in Lisbon on 14 July 2021. (Patricia de Melo Moreira/AFP)

Candice Chan - 28 June 2022
US-based young comic artist Bei Yi reflects on China's gaokao (university entrance exams), which took place in early June. Every year, Chinese students cross this narrow log bridge of national exams, hoping to find a clearing on the other side. Students from regions across China, rich and poor, see this as a possible ticket to a better life and maybe even a passport to the West. When the stakes are so high, studying becomes a moral obligation to one's family. Some make it out, but on that journey, many things are left behind.
Read more
Translated by Candice Chan on 15 July 2021

Portugal prides itself in being the first European nation to establish a permanent trading post in China when it founded Macau in 1557. Returning it to China only in 1999, the Portuguese proudly say that they are “the first in China and the last to leave”.

In the past decade or so, it is China that has come to Portugal, and in a big way. When the 2008 financial crisis caused the Portuguese economy to crash, Chinese investors began to invest in Portugal heavily. Lisbon was eager to attract foreign investment to save its state-owned companies in strategic sectors such as water, power and telecommunications and China was well-placed to provide it.

Portugal was cash-strapped and desperate for investment while China had huge reserves of capital looking for new markets.

In the same year, Fosun invested a further 460 million euros when it bought Luz Saude, Portugal’s largest health care provider. In 2018, China was the biggest investor in Portugal with over 10 billion euros in investment.

Both nations seemed quite satisfied with the course of their relations which they hailed as mutually beneficial. Portugal was cash-strapped and desperate for investment while China had huge reserves of capital looking for new markets.

Portugal is an old American ally, a founding member of NATO and has hosted a US air base for decades. Initially, Washington did not pay much attention to Beijing’s growing presence in Portugal. However, the election of Donald Trump in 2016 changed this. As tensions between the US and China degenerated into a full-fledged commercial war, Washington began to grow more critical of Lisbon’s close ties with China.

“Portugal must choose between the United States or China.” - US ambassador to Portugal George Glass

Matters came to a head when in 2020 Portugal accepted a Chinese proposal to modernise and expand the port of Sines, the country’s most important harbour. Under the Belt and Road Initiative (BRI) China proposed a 640 million euro container terminal at Sines to transform it into a major shipping hub between Europe and the Americas. Unfortunately for small Portugal, the Chinese proposal angered the Americans.

In no uncertain terms, the US ambassador to Portugal George Glass told the Portuguese government that Lisbon needed to rethink its relations with Beijing. In an interview with Expresso newspaper in September 2020, Ambassador Glass criticised Portugal for allowing Chinese investment in strategic sectors such as telecommunications and power.

The US ambassador warned of serious consequences for the two countries’ security relations if Huawei was allowed to enter the country’s 5G market. Saving his toughest criticism for the possibility of Chinese investment in the Sines port, Glass warned: “Portugal must choose between the United States or China."

In recent years the port of Sines has been growing in importance for the US. Sines is the closest point in Europe to the US east coast. The US plans to build a major natural gas terminal at Sines. The US is a major producer of natural gas and intends to use Sines to export it to its European Union allies.

The liquefied natural gas (LNG) would be sold to the EU via pipelines linking various countries to Sines. This would open a large market for US LNG and diminish the dependence of EU members on Russian gas. Ambassador Glass said that the American alternative project would transform Portugal into the Singapore of the West.

The Portuguese authorities pushed back at Glass’ comments and denounce American meddling in the internal affairs of a sovereign country. Lisbon stated that it remained a firm ally of the US and that its ties with China are based on economic interests.

Portugal would most certainly prefer to have both the American and Chinese projects at Sines. China does not seem to have any objections to such a possibility. However, Washington has made clear that Lisbon must choose. The new Biden administration, while having a more polite posture, is unlikely to change this stance.

The case of Portugal shows that when unable to compete with China on the economic front, the US would not hesitate to use threats.

As tensions between China and the US escalate, small countries, even old American allies, will increasingly come under pressure to choose sides. While the US may have some legitimate concerns over Chinese investment in Portugal’s 5G network, its criticism of other Chinese investments is controversial, if not dubious.

China invested in Portugal at a time when no one was willing to do so. Unfortunately, Portugal has been caught between two giants. Whatever choice it makes will have profound consequences.

The case of Portugal shows that when unable to compete with China on the economic front, the US would not hesitate to use threats. From Panama to Portugal, this tactic is becoming more common. However, sticks alone are unlikely to work. Washington needs to offer more carrots.