As the Myanmar coup continues, researcher Hein Khaing traces the steady but relentless progression of how the situation has resulted in increasing hatred towards China and both tangible and intangible losses suffered. 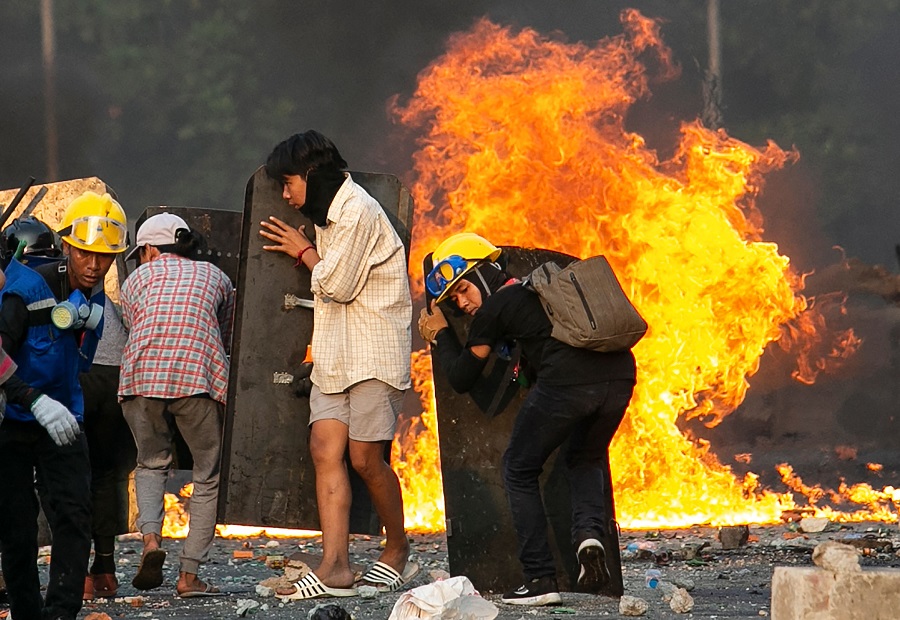 Protesters take cover behind homemade shields as they confront the police during a crackdown on demonstrations against the military coup in Yangon, Myanmar, on 16 March 2021. (STR/AFP) 14 March marked day 42 of the coup in Myanmar, with anti-coup movements going from large-scale peaceful demonstrations to smaller-scale resistance demonstrations.

The situation in Hlaingthaya township — an industrial area in the west of Yangon — had been escalating for days, with increasingly intense clashes between the military and the protesters. On the afternoon of 14 March, the military police suppressed the protest by force, resulting in some 50 deaths. Many Chinese factories in Hlaingthaya and nearby Shwepyitha were also attacked and set ablaze by unknown persons, with 32 Chinese factories sustaining various degrees of damage and at least one Taiwanese company and two Japanese companies also affected.

The negative effect of the Chinese embassy’s statement

That afternoon, the Chinese embassy in Myanmar released a statement in the Myanmar language on its official Facebook page, criticising the burning and damage, and calling on the police to take effective action to prevent such incidents from recurring. However, this statement drew another bigger wave of criticism against the embassy.

As of 7:20pm on 17 March, there were 57,000 comments on this statement, all of which were negative — and the actual level of anti-Chinese sentiment is even greater. Embassy staff have told this writer that the response of the Myanmar police to China’s request has not been positive.

... since 9 February, China has not expressed sympathy for any of the people who have died in the coup (including the 50 who died in the fires of 14 March), but is only speaking out strongly when its own interests are hurt.

Although it is reasonable for the Chinese embassy to quickly issue a response and request when the legal rights, property, and personal safety of its people are intentionally hurt, there are two reasons for the strong reaction of Myanmar society to the embassy’s statement.

First, since 9 February, China has not expressed sympathy for any of the people who have died in the coup (including the 50 who died in the fires of 14 March), but is only speaking out strongly when its own interests are hurt. Second, China is putting the responsibility for the fires firmly on the Myanmar people, and is asking the police to take action to prevent similar incidents from happening, which to the ordinary people, means standing on the side of the military police and the coup while slandering the Myanmar people.

The 1 February coup prompted a rise in China-related discussions, with negative rumours surfacing up until the Hlaingthaya incident. There were calls to damage Sino-Myanmar oil and natural gas pipelines, threats to burn factories in Hlaingthaya, and factories actually getting burned. The chain reaction took effect in phases: from unhappiness against China leading to instigation of retaliation, proposing “real” action, and the actual burning.

First, from 3 February, many rumours started to surface of China aiding the military coup in Myanmar. Phase two began from 12 February, when people started to instigate damaging the gas pipes, with “technical tips” on how to do so appearing from 6 March, when “enthusiasm” to take action also peaked.

Phase three happened on 12 March, when a photo appeared of two men carrying a banner saying: “If the blood of one Hlaing Tharyar resident hits the ground, one Chinese factory must burn.”

This photo was tweeted by Kyaw Win, founder and executive director of Burma Human Rights Network (BHRN), and subsequently went viral. And two days after the burning — which marked phase four — Kyaw denied being the originator, tweeting: “Some #China media misquoted my tweet. They don’t even understand what is primary source and original source. I just translated what the poster was saying and not my statement.”

China has been concerned about whether there are forces behind these comments and actions. Some Chinese academics feel that it is the work of the so-called “Taiwan independence” or “Hong Kong independence” camp, but a majority of people put the responsibility on “Western forces” out of habit. Only a handful can see that the Myanmar army also wants to tie itself to China so as to shift part of the pressure to China.

However, even if the perpetrators are found, it will merely be treating the symptoms but not finding the root cause. China needs to reflect on why Myanmar society readily believes negative rumours related to the country.

Chinese academics point out that China is suffering four losses from the Myanmar coup: losing the Myanmar people’s hearts, suffering damage to its interests, being contained by geopolitical challenges, and having its international image and soft power damaged.

Myanmar society already believes the conspiracy theory that China is supporting the Myanmar military, and their negative feelings towards China have thus reached a new high.

In terms of losing the Myanmar people’s support, China is currently facing four unfavourable situations. First, a credibility issue. The spokesperson of Myanmar’s National League for Democracy (NLD) had appealed to China for help through the media before he was detained by the military, and China’s neutral stance has been called into question by the newly-established Committee Representing Pyidaungsu Hluttaw of the NLD. Second, following numerous rumours spreading like wildfire, Myanmar society already believes the conspiracy theory that China is supporting the Myanmar military, and their negative feelings towards China have thus reached a new high.

Fourth, the Myanmar Chinese community is displeased with China as well. Not only have there been misunderstandings between Myanmar’s indigenous people and China, misunderstandings have also emerged with the Myanmar Chinese community that has always maintained close relations with their home country, as they now want to sever ties with China. (NB: A video of a Myanmar Chinese mother who had just lost her 19-year-old medical student son to violence in the 14 March protests has been making the rounds on social media. She is seen speaking in Chinese, expressing her displeasure and also appealing to China.)

... it would be hard for the various China-funded projects to be carried out in the short term.

In terms of damage to China’s interests, many of China’s major investment projects in Myanmar are set for greater difficulties ahead. We already know that China’s previous major investment project, the Myitsone Dam Project, was unilaterally suspended in 2011 by the Thein Sein government, which was essentially evolved from the military government. The China-Myanmar Economic Corridor construction project signed between China and the NLD could be lost as well. Even if the military government is willing to respect the agreement signed between both countries, as it would be difficult to stabilise the situation in Myanmar within the next few years and the people’s displeasure towards China has further increased, it would be hard for the various China-funded projects to be carried out in the short term.

In terms of geopolitics, we have seen various groups headed by the West express their dissatisfaction towards the military coup. China, on the other hand, has always avoided making its position clear. This has prompted the Myanmar military to focus on its relationship with the West, as clearly evidenced by its hiring of the Israeli-Canadian lobbyist.

In recent years, the Myanmar military has been in closer contact with Russia than with China. And while Russia holds a similar stance as China with regard to the military coup, it has had to bear less pressure than China. Without question, China is still the country with the greatest influence over Myanmar. But if China decides to give up on this influence, it would only create a situation of geopolitical containment in Myanmar for itself.

Renowned Myanmar historian Thant Myint-U once said that Myanmar is a test for China. Also, the latter cannot become a world leader by side-stepping the Myanmar issue and the world is watching what China will do.

Undoubtedly, there has been some subtle differences in China’s foreign policy on the Myanmar issue this time around. For example, it had made several requests for the immediate release of Aung San Suu Kyi and other detainees, and repeatedly proposed that disputes should be settled under the constitutional and legal framework. It also prompted the United Nations to condemn Myanmar’s military violence. These are unprecedented moves that encouraged Myanmar’s democracy activists at one point. However, in order to handle the Myanmar issue appropriately, China must make fundamental changes to its external thinking.

Related: Why Myanmar people believe there is Chinese involvement in Myanmar coup | Why China has everything to lose from Myanmar coup | A rising China needs to demonstrate moral courage on Myanmar issue | Myanmar: Why the US lost to China a long time ago