Will America greenlight the sale of F-35s to Thailand?

The chief of Thailand’s air force wants to buy eight American-built F-35 fighter jets. While the sale would be a shot in the arm for the US-Thailand alliance, Washington may be reluctant to approve the sale because of Thailand’s growing military ties with China. ISEAS academic Ian Storey examines the factors at play. 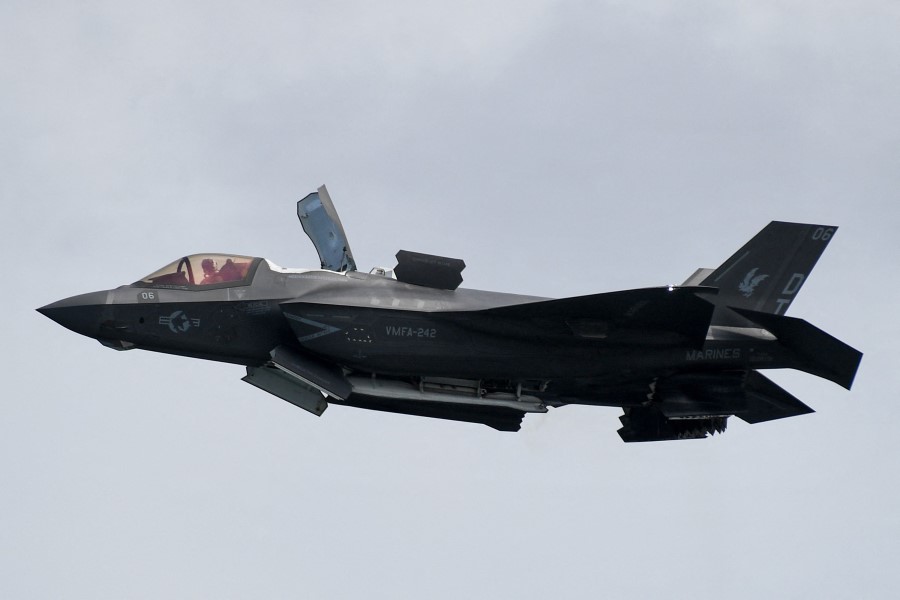 A US Marine Corps F-35B Lightning II, a short takeoff and vertical landing (STOVL) version of the Joint Strike Fighter aircraft, flies past during a preview of the Singapore Airshow in Singapore on 13 February 2022. (Roslan Rahman/AFP)

Candice Chan - 20 June 2022
The newly launched Indo-Pacific Economic Framework for Prosperity has arguably low or no ambition around market access, but perhaps because of its non-contentious nature, could be a promising start. Countries in the region welcome options amid fears of Chinese economic coercion and may just provide the momentum needed when the time is ripe.
Read more
Translated by Candice Chan on 14 February 2022

Aside from two major accidents onboard British and American aircraft carriers, the past year has been a good one for America’s most advanced jet fighter for export, the F-35 Lightning II (also known as the Joint Strike Fighter). Its maker, Lockheed Martin, delivered 142 F-35s to customers around the world and Finland and Switzerland chose the plane to be their next jet fighter. More than 750 of the 5th generation stealth fighters are now in service with the armed forces of nine countries.

If Air Chief Marshal Napadej Dhupatemiya’s wishes come true, Thailand could be Lockheed Martin’s next customer and the second country in Southeast Asia (after Singapore) to order the F-35.

Last month, it was reported that the Cabinet had approved in principle Napadej’s request to order four F-35s in the 2023 fiscal year at the cost of 13.8 billion baht (approximately US$415 million).

Napadej justified the request on the grounds that the Thai Air Force’s elderly fleet of American-built F-5s and F-16s needed to be replaced. He argued that the cost of the F-35 had fallen considerably, from US$147 million per plane in 2007 to less than US$80 million today.

Moreover, the Thai Air Force chief said that an entire squadron of 12 F-35s would not be necessary. In his opinion, eight should suffice, especially if they were paired with unmanned combat air vehicles (UAVs) currently being developed.

Thailand enjoys a low-threat external environment. Its two biggest mainland Southeast Asian neighbours, Myanmar and Vietnam, are preoccupied with civil war and China respectively. Why does it need such advanced warplanes?

Unsurprisingly, the Cabinet’s decision flew into heavy flak. Napadej’s request came at a time of severe economic distress caused by the pandemic. It also reinforced criticism that the Thai military’s procurement process lacks transparency, with the Thai Navy’s 2017 order for three Chinese-built submarines being the most notorious example.

As with the submarines, critics will also question the strategic rationale for the eye-wateringly expensive fighter jets. Thailand enjoys a low-threat external environment. Its two biggest mainland Southeast Asian neighbours, Myanmar and Vietnam, are preoccupied with civil war and China respectively. Why does it need such advanced warplanes?

America’s armed forces operate all three variants; Japan and South Korea have opted for a mix of A and Bs; Britain has bought only Bs and Australia only As; Singapore has ordered four Bs but will likely buy more later. Thailand wants four As, which are the least expensive of the three variants.

Napadej thinks he can negotiate the price down from around US$80 million to around US$70 million per plane, cheaper than the air force’s 4.5 generation Swedish-built Gripens which cost around US$85 million each. However, at the end of the day, the cost of each plane depends on what kind of armaments and avionics they come with: Switzerland will pay US$112 million for each of their 36 F-35As while Finland will get 64 fighters for US$83 million each. Napadej is probably looking at a Finnish-type deal, but this does not account for why he asked for US$104 million per plane, unless he is including armaments and UAVs. He will need to explain.

But the big question is whether the US will greenlight the sale of F-35s to Thailand.

As America’s treaty ally, Thailand has a good case. Washington has approved the sale of F-35s to seven NATO allies, as well as three of its treaty allies in the Indo-Pacific, Australia, South Korea and Japan, and Singapore, a strategic partner.

If the sale goes ahead, it could be a major boost for the US-Thai alliance, which has been in limbo since the end of the Cold War due to the lack of mutual threat perceptions and the suspension of US military aid to Thailand following military coups in 2006 and 2014. Under President Donald Trump, defence ties were normalised, and President Joe Biden has made strengthening America’s alliances a foreign policy priority.

Were Thailand to buy the F-35, it would raise the level of interoperability between the US and Thai air forces. This was keenly demonstrated last year when US F-35s took off and landed from British and Japanese warships.

But their biggest concern will be Thailand’s increasingly close military relationship with China.

Yet approval from Washington is not a given. US defence planners will question whether the Thais can afford the aircraft (financing for two of the three Chinese submarines has been suspended) or maintain the notoriously maintenance-intensive fighters.

But their biggest concern will be Thailand’s increasingly close military relationship with China. Since the 2014 coup, China has become the largest provider of arms to Thailand. The Thai military is one of only a few that hold annual exercises with all three services of the People’s Liberation Army (PLA), and the only one in Southeast Asia.

Although the US would forbid the Thai Air Force from using the F-35 to exercise with the PLA Air Force, the Pentagon would still be concerned that the jet fighter’s sensitive technologies might be compromised by the Thai military’s close ties with its Chinese counterpart.

Washington is not afraid to act on its concerns. In 2019 the US expelled its NATO ally Turkey from the F-35 programme after it purchased S-400 surface-to-air missile batteries from Russia, fearing that the system could compromise the aircraft’s technology. A few months ago, the Biden administration suspended the sale of 50 F-35s to the United Arab Emirates (UAE) due to its growing ties with China. The UK and US rushed to salvage their sunken F-35s in the Mediterranean Sea and South China Sea to prevent the technology from falling into Russian and Chinese hands.

In 2020, Indonesia also expressed an interest in buying the F-35 but, due to similar concerns, Washington politely said no, offering its F-15 Eagle instead (they approved the sale on 10 February). The US has yet to respond to Thailand’s interest in the F-35, but is also likely to offer Napadej F-15s instead. He may accept it, or play hardball by telling Washington that if it refuses his request for stealthy jets, he will turn to Russia (the SU-57 Checkmate) or China (the FC-31 Gyrfalcon) instead. Then the hard bargaining will begin.

Related: Thai military deepens engagement with China amid pandemic | Overzealous attempts by China and the US to sway Southeast Asia countries counterproductive | 'Mini' Shangri-La Dialogue: The US needs to provide tangible deliverables in Southeast Asia | US defence chief Lloyd Austin in Southeast Asia: Did the US strike the right notes?