Will the great-grandson of Chiang Kai-shek be the next Taipei mayor and Taiwan leader?

Amid the Kuomintang’s current slump in popularity and dynamism, one man might be the one to give it the spark it needs: Wayne Chiang, the great-grandson of Generalissimo Chiang Kai-shek. But will Wayne Chiang’s family name and background be an asset or burden in his bid for Taipei mayor in the upcoming election later this year? And will Taiwan see another Chiang as president in future? 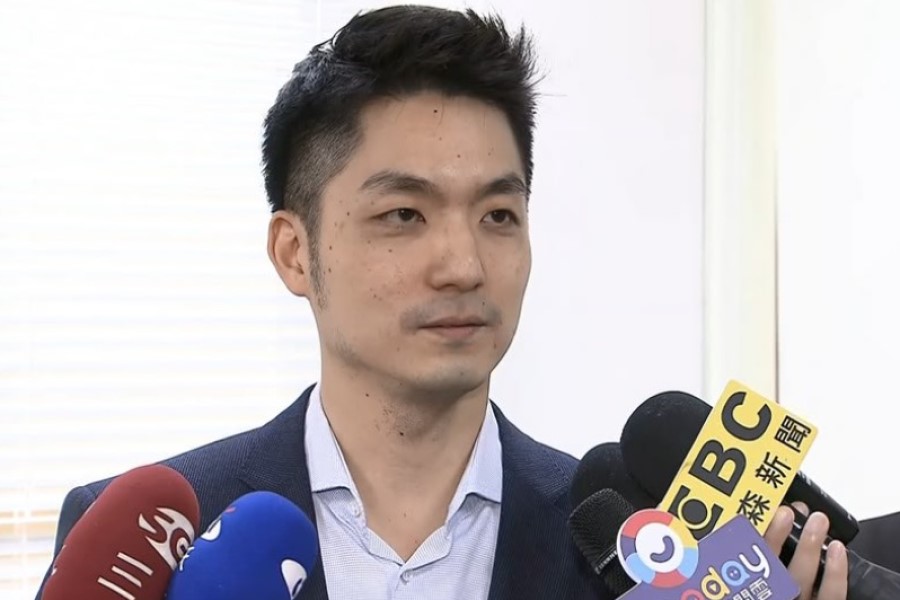 Wayne Chiang, a descendant of Chiang Kai-shek, is running for Taipei mayor. (Internet)

Candice Chan - 30 November 2022
An incident involving errors with Covid test results at a test facility in Lanzhou has opened the doors to deeper digging by netizens, indicating a pattern of outbreaks wherever there are facilities established under the Shenzhen Nucleus Gene Technology Co. Coincidence, or something else?
Read more
Translated by Candice Chan on 7 February 2022

Taiwan is set to hold its “nine-in-one” local elections at the end of this year, with people voting for nine categories of local officials and councillors. According to reports, Chiang — with his impressive qualifications, experience and looks — has been quietly working hard for some time in preparation for his bid to run for Taipei mayor, which will be announced after the Chinese New Year. One strong factor in his favour is that he is currently leading in public polls.

A poll released on 20 January by the TVBS Poll Center showed that in a three-way competition of the “Blue, Green, and White” camps, Chiang leads with 40% support over Minister of Health and Welfare Chen Shih-chung (also in charge of pandemic efforts) of the ruling Democratic Progressive Party (DPP) government, and Taipei deputy mayor Huang Shan-shan of the Taiwan People’s Party (TPP).

However, with the DPP government playing the Chiang Ching-kuo card to signal itself as the flagbearer of his stand “opposing the Chinese Communist Party (CCP) and upholding Taiwan” (反共保台), several analyses say that this might pull in some “light Blue” KMT supporters and complicate things for Wayne Chiang's Taipei mayor campaign, as he is a descendant of the Chiangs. The DPP is highlighting Chiang Ching-kuo’s stand of “opposing the CCP” and intentionally portraying the KMT as sucking up to the CCP, making it difficult for the KMT to manoeuvre.

Taiwanese media personality and pro-establishment Blue camp supporter Tsai Shi-ping assessed that once Wayne Chiang announces his candidacy, he will have to think about how to handle the hot potato: “Has the KMT done justice to Chiang Ching-kuo?” And for Wayne Chiang himself, his difficulty is how he can move beyond the KMT.

KMT Legislative Yuan member Lai Shyh-bao feels that there is no cause for concern, because Wayne Chiang’s support base is bigger than the KMT’s. According to a poll released on 25 January by my-formosa.com, only 22% of the public approve of the KMT, while the TVBS poll shows that Wayne Chiang has 40% approval, meaning he has stronger support as an individual than the KMT.

According to reports, when announcing his candidacy for Taipei mayor after Chinese New Year, Wayne Chiang will also announce his team, including spokespersons, and will address the issue of the Chiang family name. Going by Wayne Chiang’s Facebook posts, he does not intend to evade the question, and to some extent even feels that having the surname “Chiang” is a bonus.

While debate remains in Taiwan over Chiang Ching-kuo’s historical deeds, polls show that he remains the most popular among Taiwan’s presidents, and Wayne Chiang is probably fully aware that descendents of the Chiang family can claim part of this aura.

On 22 January, after attending the opening ceremony of a library named after Chiang Ching-kuo in the new Ching-Kuo Chi-Hai Cultural Park, he revealed in a Facebook post that he was named by his grandfather Chiang Ching-kuo.

For Wayne Chiang to mention Chiang Ching-kuo of his own accord is a marked difference from his style since he started politics in 2015 — he has avoided mentioning his family background and made a conscious effort to show that he does not depend on his family name. While debate remains in Taiwan over Chiang Ching-kuo’s historical deeds, polls show that he remains the most popular among Taiwan’s presidents, and Wayne Chiang is probably fully aware that descendents of the Chiang family can claim part of this aura.

With the DPP’s strong push for “transitional justice”, it might be even more controversial to discuss Wayne Chiang’s great-grandfather Chiang Kai-shek, the icon of authoritarian power in Taiwan. Wayne Chiang has said he has read Chiang Kai-shek’s diary and has some thoughts about it, as well as on future plans for the National Chiang Kai-shek Memorial Hall. How he speaks of the Chiang family’s historical deeds and their place in Taiwan’s history will definitely be a focus of public discussion.

At the same time, Wayne Chiang’s family background has been of recent interest to the Taiwan media. Wayne Chiang’s father John Chiang Hsiao-yen is generally thought to be the son of Chiang Ching-kuo and his mistress Chang Ya-juo, born out of wedlock. It was only in 2005 that John Chiang acknowledged his family origins. However, in his diary, Chiang Ching-kuo denied that John Chiang and his twin brother Winston Chang Hsiao-tzu were his biological sons, claiming instead that their biological father was an old friend.

However, according to Taiwanese media personality Huang Ching-lung, while Chiang Ching-kuo had refused to acknowledge the twins, in another diary entry, he had expressed “great joy and happiness” (欣喜至极) when he received news about their birth. Huang concluded that Chiang Ching-kuo could have intentionally told a “white lie”.

Criticised for not having enough fight in him

The controversy over the “Chiang bloodline” can be an asset or burden. If Wayne Chiang handles it well, he may not lose too many points. As former Taipei mayor Hau Lung-pin said, the surname of the mayoral candidate does not matter to the people; they would look at the candidate’s beliefs, past experience, governance and the results of the services they render to the community.

Pro-Blue camp media chinatimes.com also ran a commentary on 26 January in support of Wayne Chiang, saying that it is actually not so difficult to bear the Chiang family name — trust can only be gained by daring to speak up and showing one’s governance capability and dynamism in addressing issues.

...he mostly does not make a clear stand on controversial issues, and the people of Taipei cannot see his dynamism and resolve, which is precisely what is needed of a pan-Blue camp leader.

Wayne Chiang, 43, earned his JD degree from the University of Pennsylvania and subsequently practised in San Francisco, probably the most popular younger generation KMT member. His image is close to Ma Ying-jeou: well-mannered and refined, modest and courteous. Going by his Facebook posts, he tends towards pragmatic governance rather than impulsiveness.

However, this has also drawn him criticism from some in the Blue camp. He is a member of the Blue Fighters pulled together by media personality Chao Shao-kang, but has little fight in him; he mostly does not make a clear stand on controversial issues, and the people of Taipei cannot see his dynamism and resolve, which is precisely what is needed of a pan-Blue camp leader.

Previously, in preparation for the four-question referendum, he spoke in 12 administrative districts in Taipei, but only mentioned pork imports and not the other three issues. When questioned about “selective speaking”, he simply said his stand is the same as the KMT’s.

It remains to be seen if Wayne Chiang will show more chops in the battle to be Taipei mayor. While poll figures are high, he will still need to be nominated by the party in order to stand in the ring.

Zaobao understands that the KMT has made preliminary plans to complete Taipei mayor nominations by late February or early March, and the party’s central committee does not rule out coordination in place of primary election, to reduce attrition within the party. Some have suggested getting Taipei City Council member Lo Chih-chiang — who earlier said he wanted to run for Taipei mayor — to contest elsewhere, to speed up integration within the party.

The second round is a three-way contest. The KMT has assessed the strongest rival as Chen Shih-chung, who may contest on the DPP ticket. The local party branches have even come up with the slogan “抗中保台”, which in Chinese could mean “stand up for Chung and protect Taipei” or "resist China and protect Taiwan”.

Several analyses also noted that Taipei mayor and TPP founding chairman Ko Wen-je said no to a “Blue-White” partnership, but the candidate he put forward — deputy mayor Huang Shan-shan, who may contest under the People First Party or as an independent — might win 18% of the votes, and if the DPP wins 40% of the votes, Wayne Chiang would lose narrowly.

According to reports, during the four-question referendum, Wayne Chiang covered the 12 electoral districts in Taipei, and established several local bases. In many districts, his support is higher than the KMT’s. Will Wayne Chiang be able to lead the KMT in fighting their way ahead, and show leadership in revitalising this currently demoralised 100-year-old political party?

It is said in Taiwan’s political scene that if Wayne Chiang becomes Taipei mayor and stays there for two terms over eight years, he has a chance of representing the Blue camp in the 2032 presidential elections.

Of course, it is still too early to say if another "President Chiang" will emerge in Taiwan; he will first have to make it past the Taipei mayoral election. The answer will come with the results of the "nine-in-one" local elections on 26 November.