With the CCP’s 20th Party Congress just days away, CCP journal Qiushi released an article under Xi Jinping’s name, signalling his beliefs and intentions for a “great struggle” to realise a “great dream” — the revitalisation of the Chinese people. How effective will this revitalisation be, and how will the upcoming congress contribute? 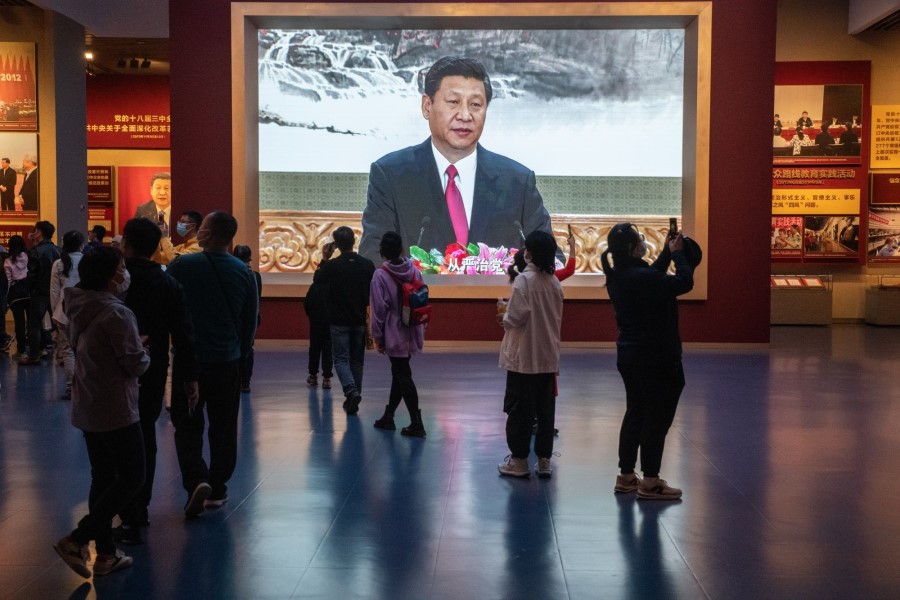 A video featuring Chinese President Xi Jinping at the Museum of the Chinese Communist Party in Beijing, China, on 4 October 2022. (Bloomberg)

Candice Chan - 30 January 2023
A mall in Shenzhen came under fire for putting up white lanterns with black text as part of its Chinese New Year decorations, while an “ugly” rabbit-shaped light decoration was removed from another mall in Chongqing. Academic Zhang Tiankan muses on tradition and innovation, and the evolution of traditional decorations.
Read more
Translated by Candice Chan on 7 October 2022

On 30 September, the day before China’s national day, Chinese President and Chinese Communist Party (CCP) General Secretary Xi Jinping released an article in the CCP journal Qiushi (《求是》), reiterating that “to realise a great dream, there has to be a great struggle”.

Naturally, the CCP leader’s emphasis on a “great struggle” as the 20th Party Congress approaches has caught the attention of the international media. However, this is not an idea raised by Xi — the essay titled “The Historical Mission for the CCP in a New Era” appeared in the report of the 19th Party Congress in 2017.

Publishing the essay in Qiushi under Xi’s name highlights that it represents his will. In over 2,600 words, Xi said China was closer than ever to realising the revival of the Chinese people, but “this would not be easily accomplished with mere words”. He called for the party to prepare for harder and tougher efforts, and to have the courage “to carry out a great struggle with many new historical characteristics”, while disapproving of “thoughts and actions to avoid conflict”.

So what are the “new historical characteristics”? Xi did not specify but stressed that “one has to recognise that this great struggle will be long term, complex and difficult”, and firmly opposed any words and actions that undermine, distort or deny the CCP leadership or China’s socialist system, as well as actions that damage the people’s interests or divide the community.

Xi’s comments in recent years portend that the “new historical characteristics” refers to the "profound changes unseen in a century".

This description has defined the CCP leadership’s diplomatic thinking over the past decade, out of which evolved China’s more proactive and bold diplomatic style and “wolf warrior diplomacy”, which the West criticises as aggressive. China’s growing opposition with the US and other Western countries has been evident over the past years.

Academics within China’s system have interpreted “profound changes unseen in a century” as a tussle of national strength, the system and ideology; the nature of the “change” is the eastward shift of the world economy, where “a rising East and a declining West” is irreversible.

Xi first raised such ideas in December 2012 in an internal speech to the Central Military Commission soon after becoming CCP general secretary. He first publicly used the term five years later in December 2017, after the end of the 19th Party Congress. During a meeting with diplomats in Beijing, Xi said “looking at the world, we are facing profound changes unseen in a century”, and “the international tide is not to be turned”.

Chinese state media also quoted Xi as saying on another occasion, “The great revival of the Chinese people is a key factor that has led to profound changes unseen in a century.”

Academics within China’s system have interpreted “profound changes unseen in a century” as a tussle of national strength, the system and ideology; the nature of the “change” is the eastward shift of the world economy, where “a rising East and a declining West” is irreversible.

If these interpretations are correct, the great revival of the Chinese people could be a key factor in these “profound changes”, under which the CCP will have a “great struggle” of national strength, the system and ideology, against those of other countries.

However, Xi mentioned at the World Economic Forum that the international community should “advocate fair competition, like competing with each other for excellence in a racing field, not beating each other on a wrestling arena”.

On the upside, China’s “great struggle” is to resolutely uphold the CCP’s leadership and China’s existing system, as well as the interests of China and its people, instead of a fight to the death with the US. But the majority of the Western world do not see it the same way.

Former Australian Prime Minister Kevin Rudd, a politician turned academic and the Western world’s China expert, recently said that changes in the expression of ideological issues in the 20th Party Congress report would be a key focus. He pointed out that, since 2014, the Dengist strategy of “maintaining a low profile and biding time” (韬光养晦) and “to never take the lead” (永不当头) has been gradually replaced by a more activist approach, as China attempts to change the regional and global status quo to be more aligned with its national interests and values. Rudd also predicted that the phrase “period of strategic opportunity” (战略机遇期) that the CCP has used for the past 20 years will be removed at the 20th Party Congress.

But it is debatable if the belief of “a rising East and a declining West” is overly optimistic, as many people believe that China should not underestimate the US’s power and prematurely raise the alarm in the Western world.

However, Rudd may have overanalysed the situation. Xi emphasised at the fifth plenary session of the CCP’s 19th Central Committee in 2020 that China was “still in an important period of strategic opportunity for development” now and for the foreseeable future, but it was facing “new developments” in its opportunities and challenges. Clearly, the 20th Party Congress would not make new ideological conclusions about this. Besides, the “profound changes unseen in a century” also include irreversible opportunities brought about by “a rising East and a declining West”.

But it is debatable if the belief of “a rising East and a declining West” is overly optimistic, as many people believe that China should not underestimate the US’s power and prematurely raise the alarm in the Western world. Following China’s economic slowdown this year, academics are doubtful if the Chinese economy will ever overtake the US’s.

Regardless, China’s diplomacy is not expected to change in approach or direction after the 20th Party Congress; it will neither soften nor turn more aggressive without provocation. The CCP’s higher-ups have already formed a judgement of the international situation and established its diplomatic direction since the 19th Party Congress in 2017. Hence, the “great struggle” was reiterated to emphasise that it remains unchanged.

The US has also openly asserted that China is its “most serious competitor” and the “most serious long-term challenge to the international order” — isn’t this a “struggle” itself for the US, albeit in a different expression?

Indeed, the “great struggle” is expected to persist. In the vicious circle of China’s continued development and the West’s strengthened containment, the mutual suspicion and strategic doubt between China and the West will further deepen. While China and the US will try to prevent bilateral relations from spinning out of control in terms of tactics and communication, their strategic confrontation will only intensify.

We must not forget that it is not only China that is engaged in a “great struggle”. The US has also openly asserted that China is its “most serious competitor” and the “most serious long-term challenge to the international order” — isn’t this a “struggle” itself for the US, albeit in a different expression?