Chinese President Xi Jinping’s trip to Kazakhstan and Uzbekistan highlights his bid to advance his vision of the China dream. This, however, will require changes in the global balance of power that countries around the world, including Southeast Asian countries, will find hard to manage. How will China proceed from here, and will it be able to win allies along the way? 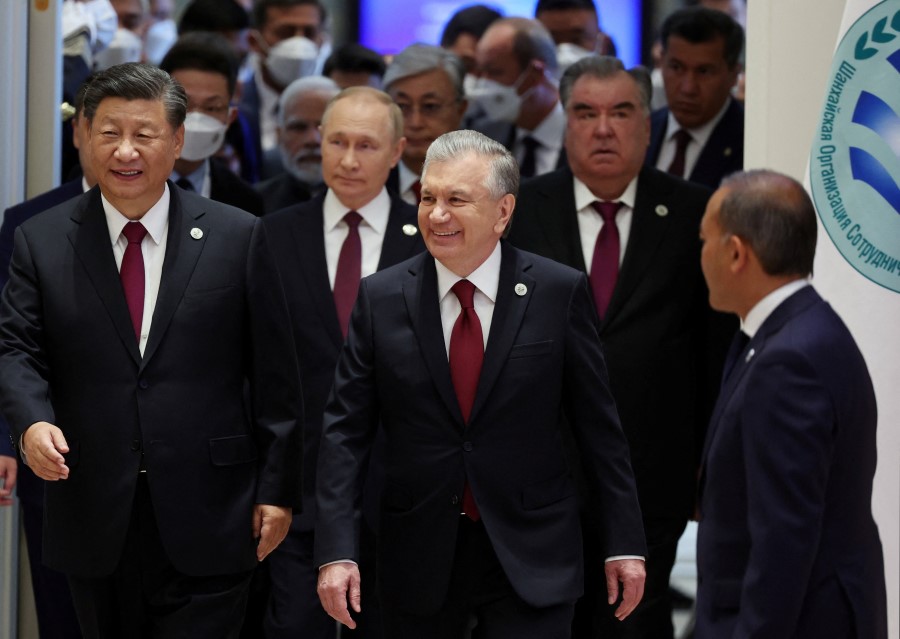 President Xi Jinping’s first overseas visit since the Covid-19 pandemic took him to Kazakhstan, where he unveiled the Silk Road Economic Belt in 2013, and to Samarkand in Uzbekistan, a key trading city on the ancient Silk Road and also the venue of the 22nd summit of the Shanghai Cooperation Organisation (SCO). Xi’s trip illuminated changes in the balance of power and global strategic relations triggered by the war in Ukraine and the ongoing Taiwan Strait tensions.

On the sidelines of the summit, Xi met with Russian president Vladimir Putin for the first time since their 4 February summit just weeks before Russia invaded Ukraine. These events sought to showcase the success of Xi’s efforts to advance the Belt and Road Initiative (BRI) as well as the “China dream” of great rejuvenation before next month’s 20th National Congress of the Chinese Communist Party (CCP), where Xi is expected to secure a third five-year term as the party’s general secretary.

The crises on both ends of Eurasia — the war in Ukraine and tensions in the Taiwan Strait — are intimately linked by the Sino-Russian “no-limits partnership” declared by Xi and Putin on 4 February. The two leaders pledged to support each other’s efforts to break up US-led alliances and security partnerships, which would serve to expand their suzerainty and bring smaller neighbours to heel in their respective home regions. The geopolitical nexus of this strategic partnership is Central Asia, where the Chinese-led SCO held this year’s summit.

The SCO meeting also offered a look at China’s now unrivalled Central Asian leadership in what one might call “tianxia multilateralism”. Tianxia (天下) is the Confucian “all under heaven” cosmic order that is held together on the earthly plane by the Chinese emperor whose role is to harmonise the world under sino-centric rule.

The photos and official statements from Xi’s visit clearly indicated Putin’s diminished stature due to his failed war plans in Ukraine. In Kazakhstan, Xi usurped Russia’s traditional role as Central Asia’s main political and security partner. He was greeted like visiting royalty and delivered a scripted pledge to defend Kazakh sovereignty and territorial integrity. This was music to the ears of Kazakh President Kassym-Jomart Tokayev, who fears Russian intervention to protect the rights of a large Russian minority living near his nation’s border with Russia.

In Uzbekistan, Xi again got the royal treatment upon arrival, while an unheralded Putin was given an unadorned SCO side meeting with Xi. Putin was compelled to thank Xi in public for his “balanced” support to Russia in Ukraine. He acknowledged Xi’s “concerns” about recent setbacks, and offered fulsome pledges of support for Chinese efforts to take over Taiwan. Xi avoided mentioning Ukraine but reinforced their partnership by pledging that “China is willing to work with Russia to strongly support issues concerning each other’s core interests, and deepen practical cooperation on trade, agriculture, connectivity and other fields”.

This is a dog-whistle call to circle the wagons against Western liberal political norms and values.

The SCO meeting also offered a look at China’s now unrivalled Central Asian leadership in what one might call “tianxia multilateralism”. Tianxia (天下) is the Confucian “all under heaven” cosmic order that is held together on the earthly plane by the Chinese emperor whose role is to harmonise the world under sino-centric rule. It is the cultural script behind Xi Jinping’s vision of harmonious global order under the Chinese party-state management to be achieved by 2049, the centenary of the founding of the People’s Republic of China.

The Samarkand SCO was staged to fit this narrative. The summit declaration pledged to form “a common vision of creating a community of shared destiny for humanity”. Xi offered SCO members enhanced economic and security cooperation with China and warned them to “guard against attempts by external forces to instigate ‘colour revolution’”. This is a dog-whistle call to circle the wagons against Western liberal political norms and values.

But the SCO is not a gathering of like-minded states; neither will they move in lock-step with Chinese values and ideology. Its members, namely China, Russia, Uzbekistan, Kazakhstan, Kyrgyzstan, Tajikistan, India and Pakistan, are not even on peaceful terms with each other. Kyrgyzstan and Tajikistan have an ongoing armed border conflict, and there was a border skirmish between China and India two years ago.

What happened in Samarkand has wider implications. First, the Sino-Russian partnership, now clearly an unequal one, remains vitally important. Each side needs the backing of the other to achieve their respective goals in Ukraine and Taiwan. China now regularly partners with Russia in joint air and naval military exercises to put Japan and US bases in Northeast Asia on warning, most recently at the Vostok 2022 exercise. In case of war, China may want Russian help to divert Japan from Taiwan, secure China’s northern and western borders, and provide China with weapons, food, energy, minerals, and trans-Eurasian connectivity.

This division of Eurasia into separate and opposed continental heartland and maritime littoral domains has a long history that appears to be resurfacing today.

Second, Russia’s inability to balance Chinese influence in Central Asia is disappointing to India. Indian Prime Minister Narendra Modi skipped the formal SCO dinner where the official group photo was taken, and a Modi-Xi meeting did not happen despite a border disengagement agreement reached on 8 September. Modi also publicly rebuked Putin in their SCO side meeting, saying that “today’s era is not an era of war” and that democracy, diplomacy and dialogue keep the world together. India’s future after Samarkand appears to lie more with maritime Indo-Pacific Quad powers than with China and a diminished Russia no longer able to balance China in Eurasia. This division of Eurasia into separate and opposed continental heartland and maritime littoral domains has a long history that appears to be resurfacing today.

Finally, Xi’s Chinese dream agenda requires that he manage the timely takeover of Taiwan, consolidate Chinese political influence and strategic leverage across the BRI footprint, and project the Chinese vision on the global governance system. This cannot be done without successfully challenging the status quo and the liberal international order that the US and its Quad members are seeking to uphold.

In short, the Chinese dream narrative and Beijing’s efforts to bring Southeast Asia under “tianxia multilateralism” pits China supported by Russia against the Indo-Pacific Quad powers, which enjoy increasing help and encouragement from western Europe. Because the Sino-Russian axis threatens stability in both Europe and the Indo-Pacific at the same time, European and Indo-Pacific powers are responding with mutual, but informal, security cooperation. This puts China on edge. The stage is set for the estrangement of continental and maritime powers. Southeast Asia, which sits astride the geopolitical fault line, will face growing dilemmas.