Chinese President Xi Jinping was not seen in public for over a week after attending the Shanghai Cooperation Organisation summit in Uzbekistan, sparking rumours of a “coup” ahead of the 20th Party Congress. Zaobao associate editor Han Yong Hong looks into the phenomenon, noting that in fact the 20th Party Congress has seen relatively few rumours surrounding it. 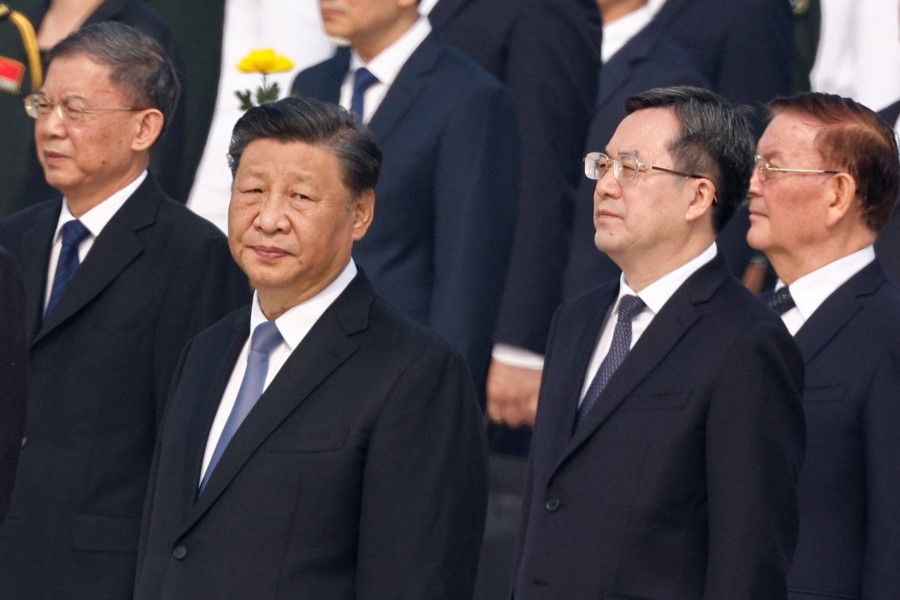 Chinese President Xi Jinping (second from left) and Director of the General Office of the Central Committee Ding Xuexiang attend a wreath laying ceremony on Tiananmen Square to mark Martyrs' Day on the eve of the National Day in Beijing, China, 30 September 2022. (Thomas Peter/Reuters)

Candice Chan - 28 November 2022
Often referred to as the world’s economic “canary in the coal mine”, South Korea has seen its economy tumble over the past year, impacted by external factors such as US interest rate hikes and signs of recession in key trade partners. The accumulation of domestic factors — currency crisis, tumbling stock market and rising inflation — is also hitting the South Korean economy hard. However, this industrial powerhouse has the domestic means to climb out of the doldrums.
Read more
Translated by Candice Chan on 30 September 2022

After ten days away from the public eye, Chinese Communist Party (CCP) General Secretary Xi Jinping attended the “Forging Ahead in the New Era” exhibition at the Beijing Exhibition Center on 27 September with six Politburo Standing Committee members, other Politburo members in Beijing and senior officials. Their high-profile appearance helped to quell political rumours circulating on foreign social media.

Baseless rumours of a “coup” came on the back of Xi’s absence after visiting Kazakhstan and attending the Shanghai Cooperation Organisation (SCO) summit in Samarkand, Uzbekistan, from 14 to 16 September.

As Xi's visit to Central Asia was his first overseas trip since the pandemic and he was going to meet his Russian counterpart at the sidelines of the summit, it was a high-profile visit. Some observers, however, noticed from news images that Xi did not attend the summit dinner on 15 September.

International news agencies quoted informed sources from the Uzbekistan government saying that Xi did not attend the dinner due to Covid-19 considerations. Given China’s strict zero-Covid policy, it is also no surprise for top leaders to undergo a period of self-isolation when they return from their travels. However, these two details have been exaggerated, and some commentaries went as far as to cite the sudden cancellation of several flights in China as “evidence” of a “coup” ahead of the 20th Party Congress.

These rumours were quickly debunked when Xi and the senior officials appeared in public on the evening of 27 September. The CCTV showed a four-and-a-half-minute clip of a few dozen people at the exhibition, including the seven Politburo standing committee members, Politburo members in Beijing, secretaries of the Central Secretariat, the deputy head of the Standing Committee of the National People's Congress, state councillors, the heads of the Supreme People's Court and Supreme People's Procuratorate, the deputy chair of the Chinese People's Political Consultative Conference, and members of the Central Military Commission.

This Xinhua article referred to Xi as “the people’s leader” (人民领袖) three times, evidently to dispel the unfounded rumours of a “coup”.

On the same evening, Xinhua uploaded a documentary about Xi being selected on 22 April as a representative to attend the 20th Party Congress, lauding Xi for having the “towering charisma, great foresight and bold strategies of a Marxist politician, thinker and strategist” who has “charted the big picture both at home and abroad, advanced steady reform and development, as well as domestic politics, foreign relations and defence, and efforts in running the party, country and military, showing the political wisdom, strategic determination, sense of mission, care for the people and art of leadership as befits the leader of a great party and country”.

This Xinhua article referred to Xi as “the people’s leader” (人民领袖) three times, evidently to dispel the unfounded rumours of a “coup”.

Notably, the practice of calling Xi “leader” (领袖) was an occasional occurrence in 2016 and 2017. Following the CCP’s 19th Party Congress in autumn 2017, the title “the people’s leader” appeared more prominently in senior leaders’ speeches and state media reports. For example, Xinhua published a feature about Xi and the Two Sessions (人民领袖习近平的两会节奏) in 2018, which referred to Xi as “the people’s leader”. At the closing ceremony of the Two Sessions in 2018, chairman of the Standing Committee of the National People’s Congress Li Zhanshu referred to Xi as “the core of the Party, commander of the army and leader of the people”.

Xi Jinping’s core position in the party was affirmed with the "Two Establishes" (两个确立) in the CCP’s third historical resolution — Resolution of the Central Committee of the Communist Party of China on the Major Achievements and Historical Experience of the Party over the Past Century — which was adopted at the sixth plenary session of the 19th Central Committee of the CCP in November last year.

Mao was known as “the great leader” (伟大的领袖), while Hua was “the wise leader” (英明的领袖). The reappearance of the term “the people’s leader” reflects Xi’s strong and unshakable position.

In 2022, the state media ramped up its publicity, with the CCTV website starting the column “The People’s Leader Xi Jinping” (人民领袖习近平). In July and September, Xinhua editor-in-chief Fu Hua published op-eds declaring the need to publicise that “the people’s leader loves the people, and the people love the people’s leader”.

In CCP history, only Mao Zedong and Hua Guofeng were called “leader”, with the latter adopting the “title” only briefly. Mao was known as “the great leader” (伟大的领袖), while Hua was “the wise leader” (英明的领袖). The reappearance of the term “the people’s leader” reflects Xi’s strong and unshakable position.

With China less than a month away from the commencement of the CCP’s 20th Party Congress, it is indeed strange that an unfounded rumour, which has been refuted by several Western Chinese observers and dismissed as “something seemingly out of a Hollywood screenwriter’s wild imagination”, could spread for days on foreign social media.

These rumours could have satisfied the appetite of those hoping to see China make a laughingstock of itself, but little do they know that their underlying perceptions are still stuck ten years in the past.

... forces seeking to challenge the top position would barely get a foothold.

There is no indication or any logical analysis to suggest that these rumours came from within the system in an attempt to interfere with the smooth commencement of the 20th Party Congress. This would be probable during the days before the CCP’s 18th Party Congress in 2012 — the so-called period of “nine dragons controlling water” (九龙治水) when power was held by a few key persons — and when political factions existed in the upper echelons of the party. There was no lack of rumours and shocking news during that time.

In comparison, numerous political factions have already been removed, and Xi’s core position has been established and written into the party’s third historical resolution. Hence, forces seeking to challenge the top position would barely get a foothold.