Corrupt officials linked to former Vice-Minister of Public Security Sun Lijun have recently been meted harsh sentences, among which include life imprisonment and removal of personal assets. Is the Chinese Communist Party (CCP) sending out a message, with just weeks left before the commencement of the 20th Party Congress? Zaobao associate editor Han Yong Hong tells us more about the CCP’s crackdown on “political factions”. 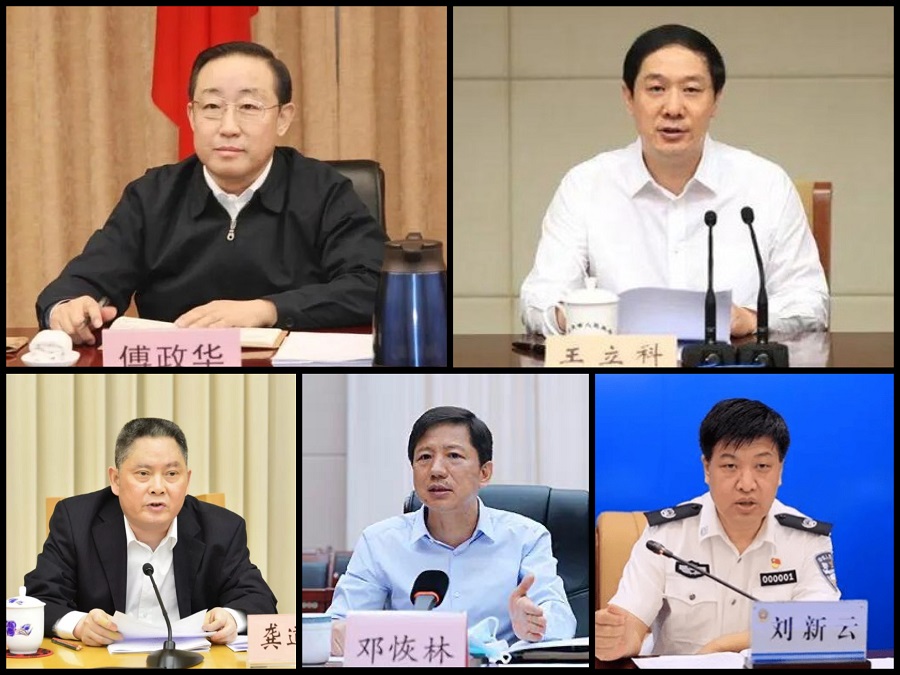 Grace Chong - 25 January 2023
With rumblings of US House Speaker Kevin McCarthy possibly visiting Taiwan in spring, Yang Danxu observes that this will not be the last we see of the “Taiwan card” being played by US politicians as they move into the second half of the current US presidency.
Read more
Translated by Grace Chong on 23 September 2022

Just weeks before the Chinese Communist Party (CCP)’s 20th Party Congress, harsh sentences have been meted out on five “tigers” from the police, political and legal fields, who are allegedly part of a “political faction” led by former Vice-Minister of Public Security Sun Lijun.

This is not just to demonstrate outcomes of a two-year cleanup of the “knife handle” (刀把子, daobazi refers to the Chinese political and legal affairs system) prior to the 20th Party Congress, but also to act as a deterrent and clear warning from the top on the issue of party cliques and factions.

Imprisonment, fines and confiscation of assets

The next day on 22 September, former Minister of Justice Fu Zhenghua had his personal assets confiscated and was sentenced to life imprisonment for taking bribes and “bending the law for personal gains”. The once prominent senior official will spend the rest of his life behind bars, with no further reduction in sentence or parole allowed.

On the same day, former head of the Jiangsu provincial Political and Legal Affairs Commission and CCP Standing Committee member Wang Like had his personal assets confiscated and was sentenced to life imprisonment with no further reduction or parole. Previously denounced as “never loyal and honest to the party” by the Central Commission for Discipline Inspection (CCDI) and found to have given “small seafood” boxes each containing US$300,000 in bribes, Wang was found guilty of taking and offering bribes, sheltering and conniving with mafia organisations, and forging identity documents.

Fu and Wang became the sixth and seventh senior officials to receive the suspended death sentence since China amended the Criminal Law in 2015.

This signals to the outside world that cases involving “political factions” are treated differently, and are classified as serious targets of crackdowns as it endangers the CCP’s political security.

Since the 18th Party Congress in 2012, the CCP has been ramping up anti-corruption efforts. It has become common to see “tigers” in the vice-ministerial roles and above fall from grace, but the harsh sentences given to the five aforementioned former officials, one after the other, is indeed significant.

These five people are allegedly part of Sun Lijun’s “political faction”, which has been investigated into and punished by the authorities after the CCP’s 19th Party Congress in 2017. Since 2020, five of the seven members of this “faction” have been sentenced, with the investigations and sentencing taking just over two years.

Among them, Fu was placed under investigation in early October 2021 and in just less than a year received his sentence ahead of the 20th Party Congress this year. This signals to the outside world that cases involving “political factions” are treated differently, and are classified as serious targets of crackdowns as it endangers the CCP’s political security. Swift and severe sentences will be meted out in such cases.

Within this “political faction”, only Sun and former anti-corruption chief of China’s Ministry of State Security Liu Yanping, who was placed under investigation in March this year, have yet to be sentenced.

... it is generally believed that Sun has yet to be sentenced as he is the “leader of the pack”, and the situation may be more complex behind the scenes, involving more senior and higher ranking deputy national leaders.

Sun was placed under investigation in April 2020. He stood trial on charges of bribe-taking, manipulation of the securities market, and illegal possession of firearms in July 2022, but has yet to be sentenced. Unlike the peripheral cases involving Fu and the rest, which are relatively more clear-cut, it is generally believed that Sun has yet to be sentenced as he is the “leader of the pack”, and the situation may be more complex behind the scenes, involving more senior and higher ranking deputy national leaders.

At 53, Sun Lijun was the youngest in the clique. Before his removal, Sun was just a vice-minister of public security, but had Fu Zhenghua — a full minister — in his pocket. Sun clearly did not manage this on his own and had the backing of more powerful forces.

The CCTV documentary Zero Tolerance (《零容忍》) released earlier this year showed how Sun helped Wang Like rise from Jiangsu vice-governor and head of Jiangsu Provincial Public Security Department to the provincial Party Standing Committee and secretary of the Jiangsu Provincial Politics and Law Commission. In return, Wang gifted Sun 90 million RMB, including four or five “small seafood” boxes every year, each containing US$300,000 in cash.

As a mere bureau-level cadre, why was Sun so powerful? The documentary did not mention his backers, but many are aware that Sun was previously the deputy head of the General Office for Public Security, and was secretary to then Minister for Public Security Meng Jianzhu. However, in analysing Sun’s case, state media did not point out the relation between Sun and Meng.

In September 2021, Sun was expelled from the party and removed from office. The CCDI criticised Sun for his excessive political ambition and poor political calibre. Apart from blatant deals in power and money, Sun’s offences included creating cliques and factions in the party, growing his personal power, and creating interest groups and partnerships of power to control key ministries.

The leadership might sentence Sun in the next few weeks before the 20th Party Congress to show the deterrent effect of removing the “tumour” of political cliquism.

As part of the process of removing the “tumour”, in June this year, the Public Security Bureau also carried out personnel changes, with former deputy director of Fujian Provincial Public Security Department Wang Xiaohong now the public security minister.

Before the 18th Party Congress in 2012, during the so-called period of “nine dragons controlling water” — referring to power being held by a few key persons — it was already somewhat of an open secret that there were cliques and factions within the party. The anti-corruption movement at the highest levels is essentially also a movement against political oligarchy.

By defining Sun Lijun and others as political factions and swiftly punishing them before the 20th Party Congress, the top leadership has declared that it will not allow cronyism or the growing of personal power.

This week’s issue of the CCDI magazine ran an article on cases investigated over the past ten years, such as Zhou Yongkang, Bo Xilai, Guo Boxiong, Xu Caihou, Sun Zhengcai and Ling Jihua, describing it as removing major political problems within the party, and quoting CCP General Secretary Xi Jinping’s analogy that no one is a “metal hat prince” — nobody has a special privilege to hold one’s position.

By defining Sun Lijun and others as political factions and swiftly punishing them before the 20th Party Congress, the top leadership has declared that it will not allow cronyism or the growing of personal power. Following the next change in leadership, the entire party will have to abide by the “Two Establishes” (两个确立), uniting around Xi Jinping as the core of the party, and guided by Xi Jinping Thought on Socialism with Chinese Characteristics for a New Era.

Related: How China's corrupt ex-police official Sun Lijun gained clout in the CCP | Corruption in China seeps into the Buddhist world | CCP raises the bar for officials' performance ahead of 20th Party Congress | Tough competition: Becoming one of 2,300 delegates at the 20th Party Congress