Technology expert Yin Ruizhi notes that one sector in which technology is lacking is traditional agriculture. Due to the scattered nature of the sector, it is difficult to implement technological solutions to production and sales. However, tech company Pinduoduo holds the power to integrate the market and reach buyers and sellers across the country. 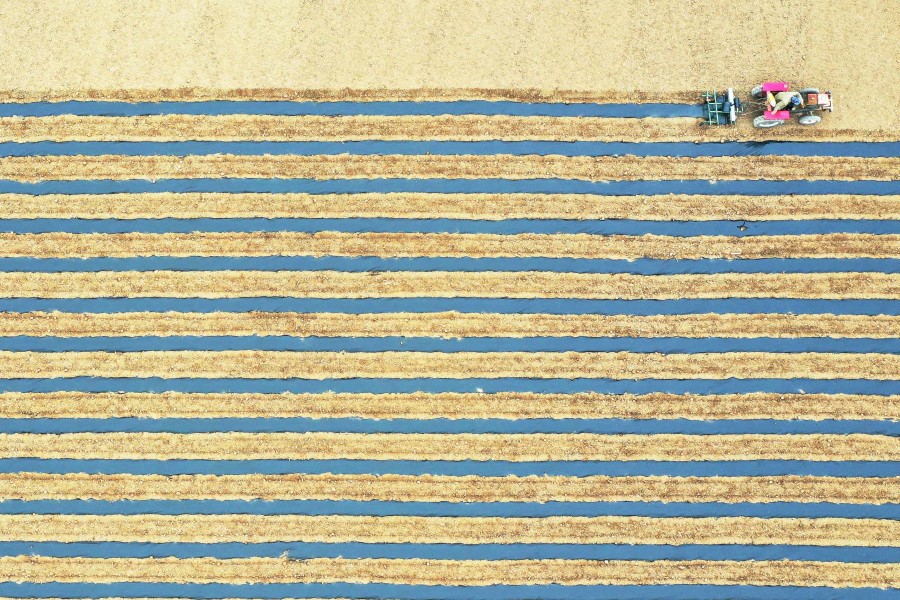 This aerial photo taken on 8 May 2022 shows a farmer planting red pepper seeds with a machine at a field in Bozhou in China's eastern Anhui province. (AFP)

Candice Chan - 20 June 2022
The newly launched Indo-Pacific Economic Framework for Prosperity has arguably low or no ambition around market access, but perhaps because of its non-contentious nature, could be a promising start. Countries in the region welcome options amid fears of Chinese economic coercion and may just provide the momentum needed when the time is ripe.
Read more
Translated by Candice Chan on 12 May 2022

Today, almost every major sector in China is developing technological applications, from trading and retail to healthcare and industrial applications. However, China’s vast yet scattered traditional agriculture sector is one that is still lacking in tech applications.

After 20 years of rapid growth in China’s internet industry, Pinduoduo has become a rising titan that is systematically entering the agricultural sector.

China’s traditional agricultural sector is scattered and has low profitability, making it difficult for tech companies to change or penetrate the industry. As a result, over the past 40 years, the traditional agricultural sector has only seen support from government policies and practically none from companies for the use and upgrade of technology.

In consideration of farmers’ livelihoods, the Chinese government does not allow capital to take over land held by farmers, which has consequently led to another issue — aside from government-planned industrialised agricultural bases, many of China’s farmland resources are scattered among farmers.

In Western countries, the traditional agricultural sector is improved by first scaling up agricultural resources through capital; coordinating resource mobilisation; optimising the industrial framework and raising efficiency; and then capturing the market with the improved product system.

Scattered land resources make it difficult for farmers to coordinate and act together, and standardise their process in the production and marketing of agricultural products. A non-standardised production process is also resistant to the systematic introduction of technology.

The sticking point in reforming the traditional agricultural sector is that policies do not allow capital to consolidate and integrate the resources and land necessary for agricultural production.

While the start of China’s reform and opening up was marked by the implementation of farm output quotas for each farming household, 40 years later the traditional small farming economy itself has shown the slowest growth.

The only continuous and systematic technological investment in China’s traditional small farming economy is the government-led agricultural technology extension stations, which are spread out over various areas. These stations are a sustained effort to bring technology into rural villages, but because they are run by the government and carry no incentives, very few tech experts are willing to join this tough sector that promises low returns.

The sticking point in reforming the traditional agricultural sector is that policies do not allow capital to consolidate and integrate the resources and land necessary for agricultural production.

However, a market integrator such as Pinduoduo can resolve this problem. Market integration means coordinating agricultural producers and making systematic industrial improvements, thus offering another solution in the mobile internet era.

The platform directly connects to nearly 900 million consumers — even more than Taobao — making it the platform with the most number of active buyers in China.

The traditional agricultural market is made up of many dispersed buyers and wholesalers of agricultural products, as well as market operators, spread out over various regions. These sales channels are no less divided than the agricultural producers — not only is it impossible to standardise and coordinate production, they do not even have a standard communication channel among themselves.

Herein lies Pinduoduo’s advantage. The platform directly connects to nearly 900 million consumers — even more than Taobao — making it the platform with the most number of active buyers in China.

As Pinduoduo distributes business among agricultural producers and other market integrators that are widely spread out across various areas, it can play the role of a resource integrator in upgrading the traditional agricultural sector.

Leader for market and resource coordination

As Pinduoduo distributes business among agricultural producers and other market integrators that are widely spread out across various areas, it can play the role of a resource integrator in upgrading the traditional agricultural sector.

It is likely that in the near future, agricultural farming technology will be another highlight of China’s internet growth.

Related: The impact of Covid-19 on the agriculture sector in China | Jack Ma an agriculture tsar? | Chinese farmers struggling with excessive anti-epidemic measures | China's internet giants are shelling out money for 'common prosperity'. But is that enough?