Arm wrestling in silence: China-US military scorecard under the shadow of the pandemic

Amid reports of being handicapped due to Covid-19 quarantines, the US military presses on to make its presence felt in the airspace near the Taiwan Strait and South China Sea. Chinese military commentator Song Zhongping says that despite these displays, the Chinese PLA has the distinct upper hand, being trained to handle the full scope of military operations including the outbreak of infectious diseases. 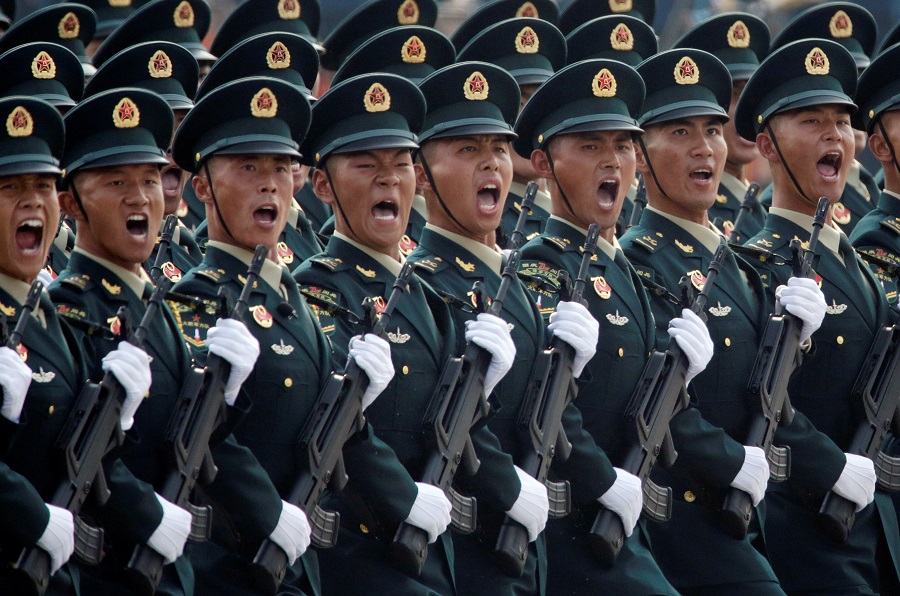 Soldiers of the People's Liberation Army (PLA) march in formation past Tiananmen Square during the military parade marking the 70th founding anniversary of the People's Republic of China, in Beijing, China, on 1 October 2019. (Jason Lee/File Photo/Reuters)

Grace Chong - 11 January 2022
Chen I-hsin asserts that the US is no longer in a position to facilitate cross-strait talks, given that China’s national strength has increased considerably and the US is no longer seen as a neutral arbiter. Moreover, the “two states” theory which Taiwan’s ruling party seems to support leaves little room for dialogue, rendering any pressure from the US futile.
Read more
Translated by Grace Chong on 7 April 2020

In recent days, confirmed cases of the novel coronavirus have arisen in quite a number of the American military’s branches and bases (at home and overseas), and on board its large vessels and tanks. The aircraft carrier USS Theodore Roosevelt, in particular, saw a slew of such cases, which compelled it to withdraw from exercises. Its entire crew had to be evacuated for concentrated quarantine in Guam, where the vessel was then put through total disinfection.

The USS Theodore Roosevelt is not the only one with a problem. A number of crew members from the USS Ronald Reagan, another aircraft carrier, have been diagnosed with Covid-19 recently too. In fact, there were personnel from a littoral combat ship and an amphibious assault ship under US command who tested positive too sometime earlier. Consequently, these vessels also had no choice but to cease their military operations and patrols.

In view of the situation, the US Defence Secretary Mark Esper made certain announcements not long ago. His first point was to declare that coronavirus case numbers within the US military shall be a military secret and no longer be made public. The second was the enactment of a 60-day stop movement order for the military on 25 March, requiring all US military personnel stationed overseas to cancel all plans for travel and action.

There is also the concern that the PLA might take advantage of the US military’s diminished effectiveness and use force against Taiwan’s “pro-independence forces”.

However, not all of the US military has ground to a halt because of the rampaging virus. In the Indo-Pacific region, for instance, a RC-135U reconnaissance aircraft and an EP-3E signals intelligence aircraft were dispatched on 27 March to patrol in proximity to the Taiwan Strait and the South China Sea airspace. This was the third consecutive day for which US military aircrafts had been patrolling over these waters. A day earlier, on 26 March, two B-52H bombers from the US Air Force had flown close to the PRC’s East China Sea Air Defence Identification Zone to carry out tactical reconnaissance, supported by aerial refuelling from a KC-135 Stratotanker. On both the 25th and 26th, an EP-3E from the Navy went on a reconnaissance flight near the Taiwan Strait.

The US sees need for presence in Indo-Pacific region

So why is the US combatant command over the Indo-Pacific region doing this even after Esper issued the stop movement order? There are a few points for consideration.

The first one is the need to actively show that the viral outbreak will not put an end to the US military’s normalised patrols in the above-mentioned waters. In other words, the US has to tell its allies and opponents: “I’m not sick. I can still move.”

The second point is the intention to observe whether the People’s Liberation Army (PLA)’s military movements are being affected by the pandemic. In other words, they want to check how well the other side is doing and whether it is still moving. There is also the concern that the PLA might take advantage of the US military’s diminished effectiveness and use force against Taiwan’s “pro-independence forces”.

The key reason for the US military being hit so hard by Covid-19 is that it pokes its nose into too many places. For one thing, the US military is a globally-planted strategic military force, maintaining a large number of military bases throughout the world. When a serious outbreak occurs in any host country for any of these bases, the base or bases in question will necessarily face the threat of an epidemic crisis. In addition, even though the US military is very strong in its combat capabilities, it is relatively ill-disciplined and poorly organised, especially in its military bases scattered in other countries. Once cases of infection are found among individual soldiers, employees or their family members within a base, the entire base is threatened.

...it (US military) is weak and has limited experience when it comes to non-combative military operations, such as deployment for the prevention and countering of contagious diseases.

To make matters worse, every US military vessel is a piece of US territory in motion. As it docks wherever it goes, it becomes possible for individual, less compliant soldiers to catch Covid-19 while taking a break, and thereby threaten the personal safety of an entire crew. It is true that the military ships, aircraft and other large weaponry under American command are strongly “triple-proof”, effective even against the hostilities of “biological warfare”. Nevertheless, this does not stop individual soldiers from getting themselves infected with the novel coronavirus unknowingly and thus spreading it among their comrades, leading to massive cross infections between humans.

In addition, while the US military has strong combat capabilities in the traditional domains, it is weak and has limited experience when it comes to non-combative military operations, such as deployment for the prevention and countering of contagious diseases. After all, operations of this sort on American soil are mostly undertaken by the National Guard of the individual states. The US Army steps in mostly on invitation to maintain law and order locally. It seldom gets involved in non-traditional security operations, such as those of humanitarian aid or disaster prevention and mitigation. This means that in comparison, the PLA which shoulders a dual mission and task, is in a different league altogether.

PLA has the upper hand in terms of overall preparedness

Much of America’s military muscle is trapped in a standstill because of the pandemic, and that tells us a lot about how flawed they are.

Even as the current pandemic exposes many issues and shortcomings on America’s part pertaining to outbreak prevention, control and management, the strategic mission of this Western superpower and its military remains unchanged. Their central concern is still about power play and the mission to keep an eye on and contain China’s PLA. But all it takes for us is to look at the actual results of the general non-combative military operation that is the fight against Covid-19. Much of America’s military muscle is trapped in a standstill because of the pandemic, and that tells us a lot about how flawed they are. The military conflicts or wars of the future shall be in the form of hybrid warfare complicated by numerous variables, where anything can happen. The key point is: only the last man standing will secure the final victory.

The military forces of China and America should not become opponents. They ought to join forces as defenders of world peace. Only such a state of affairs will spell blessing for the world. After all, the world faces a host of global problems, including issues related to climate, disease and the environment. All these require the combined efforts of all humanity. As two major powers with pivotal global influence, China and the US must work together towards solving these problems. That is the final scenario that the community of shared future for mankind is to arrive at.

Related: US aircraft carrier visit and Vietnam's delicate balancing act | Recent Chinese moves in the Natunas rile Indonesia | The Philippines' termination of the Visiting Forces Agreement: A win for China and Russia | Why is Beijing flexing its military muscle over Taiwan airspace amidst the novel coronavirus crisis?