The recent virtual summit commemorating 30 years of ASEAN-China dialogue relations was held without a representative from Myanmar, the second time in a month that Myanmar was absent from the ASEAN family. The Myanmar issue is likely to pull ASEAN on many sides in the days to come, but the fact that the summit went on and concluded with some deliverables speaks for the strength of ASEAN-China relations. 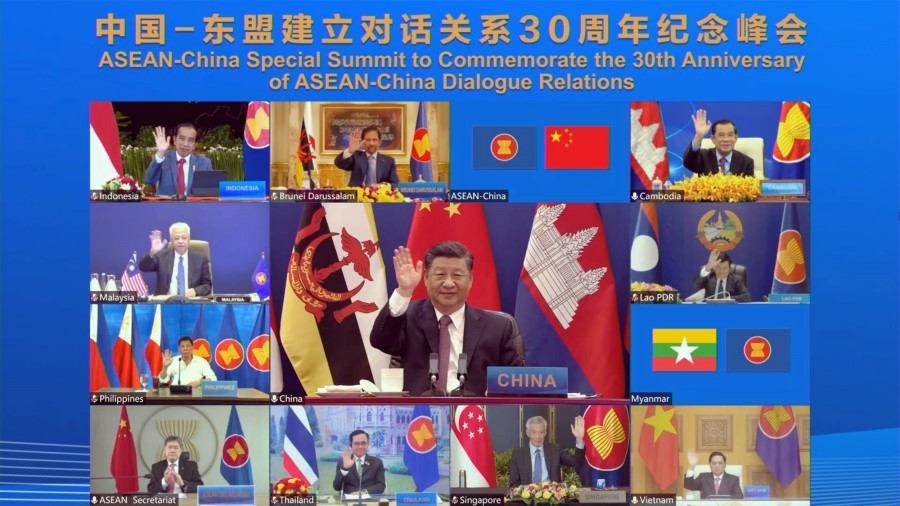 Candice Chan - 11 August 2022
China’s Big Fund has come under scrutiny following a series of high-profile corruption investigations involving key persons in the chip industry. The CHIPS Act was also recently signed into law in the US to counter China, which makes things even more difficult for the sector. Zaobao correspondent Chen Jing speaks to industry experts to find out how the Big Fund can come out of this crisis.
Read more
Translated by Candice Chan on 23 November 2021

On 22 November, ASEAN and China held a virtual summit commemorating 30 years of dialogue. However, Myanmar’s seat was empty at this milestone event, marking the second time in a month that Myanmar has been absent from the ASEAN family.

This absence has attracted attention, and is a clue that some unseen currents remain at play.

Beijing is also clear that ASEAN is an entity, and Myanmar’s representation at the summit would ultimately be decided by ASEAN.

This was not officially confirmed by China or any Southeast Asian country. However, Malaysian Foreign Minister Saifuddin Abdullah said on 22 November that ASEAN countries excluding Myanmar had agreed with China’s suggestion that Myanmar’s ambassador to Beijing would join the meeting. It stands to reason that this person would be someone accepted and trusted by the Chinese government, and would show that China still wanted Myanmar to be represented at the meeting. However, this diplomat did not show up.

A Chinese academic said Beijing has always engaged in pragmatic diplomacy; military junta or not, Beijing would pragmatically feel that it is necessary to engage them, and it is very likely that it made efforts to negotiate and mediate between the parties before the summit. However, Beijing is also clear that ASEAN is an entity, and Myanmar’s representation at the summit would ultimately be decided by ASEAN.

On the other hand, ASEAN also hopes for stability to return as soon as possible to the Myanmar government. However, ASEAN faces a tough call: if it does not respond or act in view of the situation in Myanmar, its reputation will be damaged. As it is, there have always been international critics who feel that ASEAN is just all talk.

So, after the coup in Myanmar, ASEAN called a special summit in Jakarta in April and reached a five-point consensus with the Min Aung Hlaing government, including the cessation of violence; constructive dialogue between all parties; the appointment of a special envoy of the ASEAN Chair to mediate in the dialogue process; the facilitation of humanitarian aid; and the visit of the special envoy to Myanmar to meet with the parties concerned. However, the Myanmar military junta has been slow to fulfil these commitments, stalling ASEAN’s mediation efforts.

As a result, ASEAN decided to exclude political representatives from Myanmar in a rare move prior to the ASEAN summit last month, but agreed to invite Chan Aye, permanent secretary in the foreign ministry under the junta government, to attend the summit as a non-political representative. However, the junta rejected the invitation, and Myanmar was absent from the virtual summit, just like this time.

Maintaining the unity and credibility of ASEAN is vital to ensuring that ASEAN will stay independent and not become a vassal.

ASEAN will be put under pressure from different sides

Myanmar’s absence from two summits is not something that other ASEAN member states hope to see. And ASEAN has also compromised by agreeing to allow Myanmar’s ambassador to China to attend this time. However, ASEAN has to take a firm stand on the Myanmar issue as this concerns the unity of ASEAN and its credibility as a rules-based organisation.

Amid the complex international geopolitical environment, ASEAN will be put under pressure on different issues. Maintaining the unity and credibility of ASEAN is vital to ensuring that ASEAN will stay independent and not become a vassal.

Despite Myanmar’s no-show, the ASEAN-China summit was still fruitful, with both sides announcing the establishment of a China-ASEAN comprehensive strategic partnership.

Singapore Prime Minister Lee Hsien Loong said on Facebook that it was timely for both sides to discuss “restoring cross-border travel progressively and safely”, and that “enhancing the ASEAN-China FTA can boost our economies and create new opportunities for companies and workers in the region”.

As expected, Chinese President Xi Jinping also distributed “gifts” to ASEAN, such as contributing an additional US$5 million (roughly S$6.8 million) to the Covid-19 ASEAN Response Fund, providing US$1.5 billion of development assistance in the next three years to support ASEAN countries’ fight against Covid-19 and economic recovery, and so on.

...the fact that the political will and way forward for cooperation between ASEAN and China have not been affected by specific events also conveys an important message.

Xi also emphasised that China would “never seek hegemony, still less bully smaller countries” in a bid to dispel any anxiety that ASEAN member states may have about a rising China.

Myanmar’s absence from the summit seemed somewhat awkward, and how the situation in Myanmar will turn out continues to be a big problem for ASEAN.

However, on the 30th anniversary of China-ASEAN dialogue relations, the fact that the political will and way forward for cooperation between ASEAN and China have not been affected by specific events also conveys an important message.

Related: A rising China needs to demonstrate moral courage on Myanmar issue | Why Myanmar people are wary of a 'pauk-phaw' (sibling) relationship with China | ASEAN’s deft diplomacy with its dialogue partners | Chinese researcher: Why China avoids taking a strong stand on Myanmar