In a speech last week, Xi Jinping painted the broad strokes of China’s views on democracy, including criteria for assessing democratic systems and what such systems ought to do for the people. However, with the West convinced that China lacks democracy and is not in a position to preach about it, how far can the country advance its brand of ‘whole-process people’s democracy’? Zaobao correspondent Yu Zeyuan explores the topic. 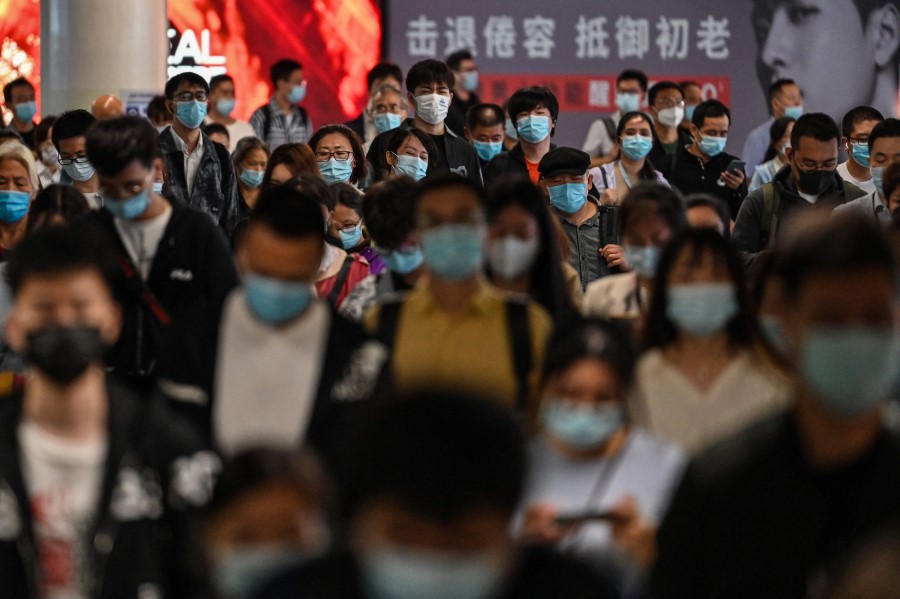 People walk in a subway station in Shanghai on 12 October 2021. (Hector Retamal/AFP)

Candice Chan - 20 September 2022
Li Cheng, director of the John L. Thornton China Center of the Brookings Institution, notes that well-educated and professionally capable military technocrats are prominently represented in the PLA leadership, and this trend is set to continue after the 20th Party Congress. What contributions will this new corps of military technocrats make as Xi Jinping heads into a likely third term?
Read more
Translated by Candice Chan on 18 October 2021

Chinese Communist Party (CCP) General Secretary Xi Jinping said last week that democracy is “a shared value of humanity”, and laid out the criteria for assessing democratic systems and the advantages of China’s “whole-process people’s democracy”.

China’s leader publicly recognising the value of democracy and declaring its resolve to push through China-style democracy, is necessitated by the need for achieving domestic political growth, and also a desire to tussle with the West for speaking rights on democracy — as the West is of the opinion that China lacks democratic freedoms.

To the West, China’s political system has not changed much over the past decades, particularly in the past few years, with the authorities’ heightened control on those with alternative views as well as on public opinion in general.

On 13 and 14 October, addressing a central conference on work related to people’s congresses, Xi reiterated his criteria for assessing democratic systems: “In judging whether the political system of a country is democratic or effective, [we should] examine if there is an orderly and legal succession of its leadership, if its people can manage state affairs, social, economic and cultural matters in accordance with the law, and if its people can effectively express their interests and demands.”

He added that it also depends on whether different sectors of the society can effectively participate in the political life in the country, whether the country’s policies help a shift towards science and democracy, whether various talents can enter the country’s leadership and management framework through fair competition, whether the ruling party can lead in national affairs in accordance with constitutional and legal regulations, and whether there are effective checks and balances on power.

Without naming any country, Xi criticised the flaws in Western-style electoral democracy. He said democracy is not an ornament or just for decoration, but for solving the people’s real problems. The key to whether or not a country is democratic lies in whether the people run the country, whether the people have the right to vote, and more importantly, whether the people have the right to broad participation. It also depends on what promises are made to the people in the election process and how many of these promises are fulfilled after the election. It has to take into account what political procedures and rules are stipulated by the systems and laws, and whether these systems and laws are implemented well; as well as whether the rules and procedures for the operation of power are democratic and whether that power is really supervised by the people.

Also without naming any country, Xi criticised the West’s monopoly of democracy, noting that democracy is not a privilege reserved to a small minority of countries. He said, “Whether a country is democratic or not should only be judged by the people of that country, and there is no place for a small number of outsiders to point fingers at this or that,” adding that, “It is undemocratic in itself to use a single yardstick to measure the world's various political systems and examine the rich political civilisation of mankind with a monochrome eye.”

In the 40 years since China’s reform and opening up, the general sentiment in the West is that China has made historic progress economically and socially, but progress in its political system is seldom mentioned. To the West, China’s political system has not changed much over the past decades, particularly in the past few years, with the authorities’ heightened control on those with alternative views as well as on public opinion in general. It is felt that the state of democracy in China has deteriorated rather than improved, and is still far from the standards of democracy, freedom, and human rights as identified by the West.

China’s political system has undergone changes as well. For example, it has been improving the rule of law, constructing a service-oriented government, curtailing power and fighting corruption.

The criticism levelled on Chinese politics by Western public opinion is not entirely prejudiced. Based on Western values, China’s political system lacks political checks and balances and “one person, one vote” elections. Freedom of speech, especially political speech, is strictly controlled, and democracy is naturally out of the question.

Based on the West’s definition of democracy, China’s one-party rule and highly centralised political system will never yield true democracy. Following China’s reform and opening up, the West has tried to guide China to make political reforms in accordance with Western values. However, China insisted on undergoing political development with its own characteristics, and the West’s efforts did not produce any results.

Apart from its history and cultural traditions, the more important reason why China is able to walk its own path amid political confrontation with the West is because China’s political system guarantees economic and social development and improvement of people’s lives.

For decades, compared with populous countries such as India and Brazil that have implemented Western electoral systems, China is far ahead in terms of raising people’s living standards and enhancing overall national strength. This provides evidence that China’s political system is effective and rational. Otherwise, it would have been difficult for China to become the world’s second largest economy, while striving towards becoming the largest economy in the world.

Actually, compared with 40 years or even ten years ago, China’s political system has undergone changes as well. For example, it has been improving the rule of law, constructing a service-oriented government, curtailing power and fighting corruption. That is to say, China’s political system is not the unchanging monolith the outside world thinks it is, but one that has made adjustments and improvements along the way to adapt to economic and social development, such as by strengthening deliberative democracy (协商民主), safeguarding human rights and so on.

But the West does not think that these changes are related to democracy because both sides have given democracy a different definition. At the same time, amid escalating tension between China and Western countries, the West has long taken the moral high ground on democracy and is adept at countering China with issues of democracy, freedom, and human rights. It will not be possible for them to give up this effective weapon.

Trying to regain the initiative

China has erstwhile been in a passive position when it is attacked by the West on democracy and human rights. Undoubtedly, this is due to Western public opinion having a strong voice in international society, but another key reason is also because China has lacked a credible narrative on democracy with which to defend itself.

As China rises on all fronts, it certainly does not wish to always be rebuked on the topic of democracy. Now that China’s top leader is affirming the value of democracy, putting forward standards for evaluating democracy, and emphasising the need to enhance whole-process people’s democracy, it not only shows that China is taking a different democratic path from the West but also implies that China is building its own democratic discourse system and refuting Western accusations against itself in this arena.

Undoubtedly, whether China walks a democratic path with Chinese characteristics or establishes its own democratic discourse system, it will carry a heavy responsibility and the road will be long.

Related: Chinese academic: The US is where money rules behind the facade of democracy | Chinese culture at odds with freedom and democracy, shows fate of Ming dynasty's opposition party Donglin | Can the CCP avoid Stalin's curse under Xi Jinping? | China-US strategic showdown: Will the east wind prevail over the west wind? | Chinese academic: 'China will walk its chosen path and let Western countries talk!'