China and the West continue sparring during party congress

China’s American and European partners do not seem keen on granting China a “stable external environment” during the 20th Party Congress. With diplomatic sparring ratcheting up, Xi’s new team will have its work cut out when the congress ends in a few days’ time. 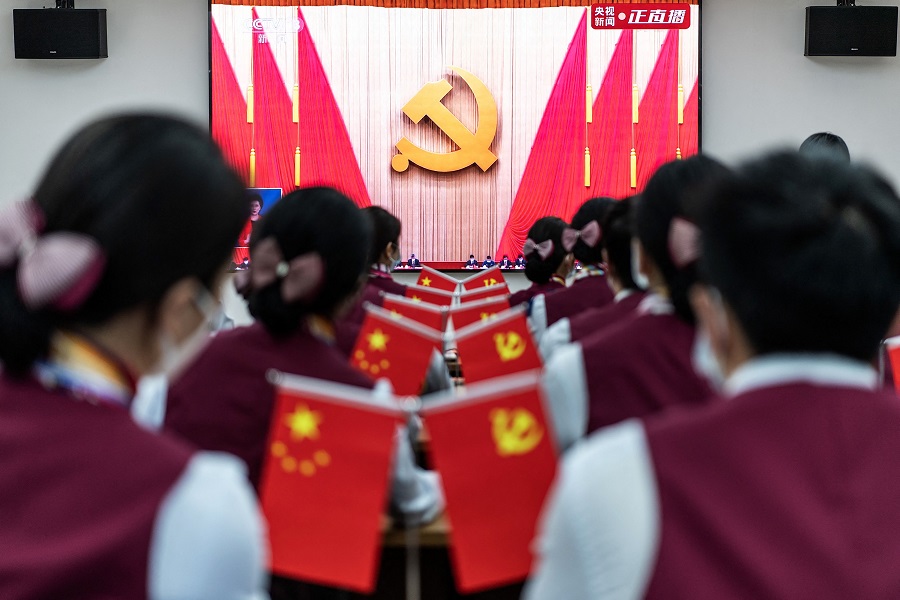 Grace Chong - 30 January 2023
In the last of a six-part series on hiking in Hong Kong, cultural historian Cheng Pei-kai shares the wonders of Hong Kong’s hiking trails. As he rediscovers the hidden splendour of Ma On Shan on a difficult hike, he marvels at the ingenuity of the gods, keeping the pristine away from the evil world. Only the most determined will glimpse unparalleled beauty.
Read more
Translated by Grace Chong on 20 October 2022

A week before China’s 20th Party Congress commenced on 16 October, the US escalated the China-US tech war, imposing additional export controls on advanced chip exports to China. There went China’s hopes of holding the congress in a stable external environment. But the greater surprise has been China’s clashes with the West — the US, the EU, Germany, the UK and others — in the last few days, setting up Chinese diplomacy for uncertainty when the congress ends.

In the face of a tough external environment, CCP General Secretary Xi Jinping urged the Chinese people to prepare themselves to “withstand high winds, choppy waters, and even dangerous storms” at the opening ceremony of the congress. At the same time, he stressed that the rejuvenation of the country was “on an irreversible historical course”, thereby highlighting the challenges but also showing confidence in tackling greater competition from the US.

Xi also pledged to “achieve breakthroughs in core technologies in key fields” and accelerate “efforts to build our self-reliance and strength in science and technology”. This implies that after the congress, China will focus its energies on dealing with the intensifying tech war. Furthermore, amid an accelerated decoupling from the US in the areas of national security and high technology, China is still able to withstand American efforts to cut China off from certain chip supplies.

Criticisms from the US and the EU

A day after the opening of the congress, US Secretary of State Antony Blinken again targeted China when he spoke at Stanford University’s Hoover Institution. In assessing the great changes that have taken place in China in the last decade, he criticised Xi for making China “more aggressive”, saying that this “poses a challenge” to US interests and values.

He also played the Taiwan card during his speech, alleging that Xi was “disrupting the status quo and creating tremendous tensions”.

... cast uncertainty on the prospect of a first Xi-Biden face-to-face meeting in November, and set off yet another US-China war of words.

While Blinken reaffirmed US committment to work with China on common interests, harsh criticism of the CCP’s highest echelons at this politically sensitive time has cast uncertainty on the prospect of a first Xi-Biden face-to-face meeting in November, and set off yet another US-China war of words.

On 18 October, Chinese foreign ministry spokesperson Wang Wenbin uncharacteristically singled out Blinken’s remarks, calling it an “alteration of the US’s commitments”. Wang urged the US to “honour its commitments” and “reflect its statements of not supporting ‘Taiwan independence’ in concrete actions”.

The diplomatic sparring during the congress also involved European partners. During the EU’s Foreign Affairs Council meeting in Luxembourg on 17 October, High Representative of the EU for Foreign Affairs and Security Policy Josep Borrell assessed that China was increasingly becoming a “tough competitor” for the EU amid its quest for influence in the world, including Africa, Asia and Latin America.

An internal document circulated to EU member states predicted that China’s congress would affirm “inward looking policies” in terms of political closure, economic and technological self-reliance, and likely “widen the divergence between China’s and our own political choices”.

The document also stressed the impact of the Taiwan issue on China-Europe relations, and warned that the EU’s dependence on Chinese products was a “strategic vulnerability”, and called for strengthening cooperation with the US and Indo-Pacific region, while reducing reliance on China in terms of the economy and industrial supply chain. Such statements foreshadow the possibility that the EU intends to accelerate decoupling with China.

In response on 17 October, Wang reiterated that China and the EU are partners, not rivals, and gave a reminder that “arbitrarily placing curbs for political purposes disrupts international cooperation and destabilises industrial and supply chains.”

This statement emphasising competition and limited cooperation shows that the EU’s stand towards China might move closer to the US.

Since 2019, the EU has considered China a partner, competitor and systemic rival. Borrell said the session on 17 October reconfirmed the EU’s approach to China, and that it can still engage with China on climate change and other issues of common interest.

However, he also warned that the EU has to stay clear-headed in engagement, because China’s role as a competitor is becoming increasingly salient. This statement emphasising competition and limited cooperation shows that the EU’s stand towards China might move closer to the US.

Frowns from Germany and the UK

At an annual public hearing on 17 October, Germany's three main spy agencies reminded Germany’s political and commercial sectors not to be “naive” in engaging China, warning about the threat posed by a "globally ascendant autocratic China." Thomas Haldenwang, president of the Federal Office for the Protection of the Constitution (BfV) domestic intelligence agency, conveyed the threat posed by China and Russia with an environmental metaphor: "If Russia is a storm, China is climate change."

The intelligence agencies also said China had been conducting "sophisticated spying operations" on Germany's armed forces for years, and warned that it was risky to allow Chinese actors to get involved in German infrastructure projects, such as a proposed stake in Hamburg's container terminal.

The recent comments by Germany’s intelligence agencies and other key government members show that German Chancellor Olaf Scholz — openly against decoupling with China — might be in the minority.

On 18 October, Wang said: “We call on the German side to view the bilateral relations in an objective and rational light, stop giving voice to ‘the threat of Chinese spies’, stop misleading the public and smearing China, and stop politicising normal cooperation between the two countries.”

The recent comments by Germany’s intelligence agencies and other key government members show that German Chancellor Olaf Scholz — openly against decoupling with China — might be in the minority.

The day the 20th Party Congress opened, a fresh diplomatic storm was sparked between China and the UK when a Hong Kong pro-democracy protester was pulled into Chinese consulate grounds in Manchester and beaten up. Greater Manchester police said in a statement that it had opened an investigation, and committed to bringing to justice anyone culpable.

On 18 October, Wang said "disturbing elements" had illegally entered the consulate, which had the right to take the necessary measures to safeguard the peace and dignity of their premises.

On 19 October, British Foreign Secretary James Cleverly said the incident was “unacceptable”, adding that the protests had been peaceful and legal, and that the government was considering further action.

The congress has not yet ended but China’s diplomatic difficulties are already resurfacing and will likely test the resolve and wisdom of the new leadership. Observers will be keen to see whether China will respond to these diplomatic challenges next week with confrontation and tit-for-tat actions.

This article was first published in Lianhe Zaobao as “中国与西方关系二十大期间又起波折”.

Related: America and Europe are coming together against China, but will it work? | Is it possible to decouple from the world's biggest market and factory? | Is China indeed the biggest threat to the US? | Securing its place in the world economic order: The EU can't afford to wait for the US