Statistics show that approximately 100,000 China youths die of suicide every year. In times of coronavirus, the risk of people having suicidal thoughts and possibly acting on them has also increased. Help comes in the form of “suicide interventionists” from China's e-commerce platforms. As online shopping becomes more prevalent, these portals are fast becoming the front lines of shopping for self-harm. Zaobao journalist Zeng Shi looks at how e-commerce companies are taking a proactive role in suicide prevention. 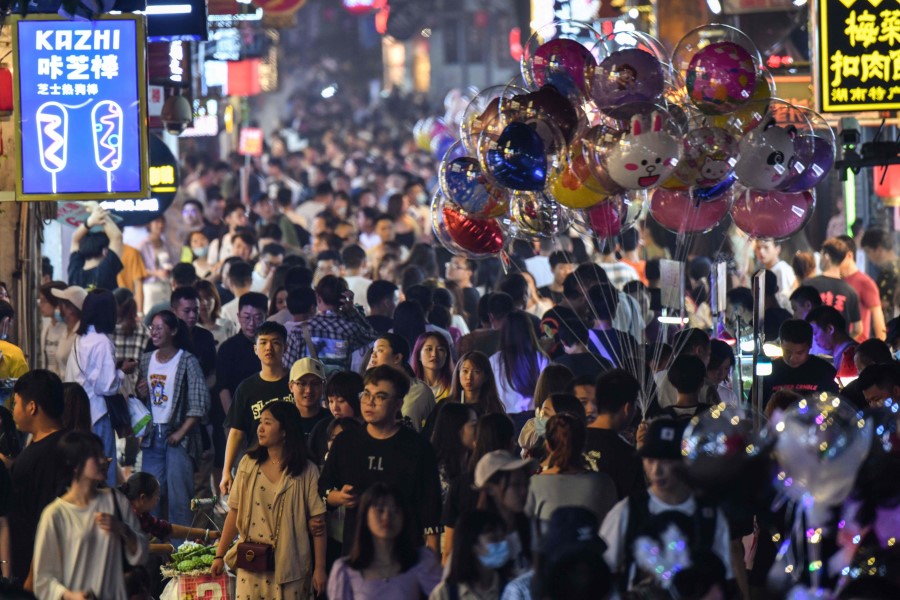 Pedestrians in a crowded street surrounded by small shops in the city of Changsha, China's Hunan province, 7 September 2020. (Hector Retamal/AFP)

Candice Chan - 5 December 2022
Susannah Patton, director of the Southeast Asia Program at Lowy Institute, reflects on the thaw in Australia-China relations, surmising that the resumption of dialogue may mean Australia is no longer a regional outlier. But unchanging imperatives may see Australia’s continued investment in capabilities for the regional deterrence of China, which may worry some in Southeast Asia.
Read more
Translated by Candice Chan on 21 September 2020

April 2020, night. The Suzhou police received a peculiar phone call telling them that a man might be committing suicide by drug overdose and they should act quickly.

...e-commerce websites see many unusual orders, with no lack of people buying tools or medication to end their lives

The call was from a Chinese e-commerce platform. The man had bought some medicine and said this to the vendor he was chatting with online: “What is the fatal dose of this medicine? I’ve been suffering for so long, I don’t have the courage to go on.” The customer service staff felt something was amiss and notified the platform of the emergency. A “suicide interventionist” of the platform immediately got hold of the buyer’s information and contacted the police.

Half an hour later, the Suzhou police found the depressed man in a park. He had come to Suzhou after a brawl with his father and after his mother passed away. But he lost his job during the pandemic and could not even afford the rent. When his wife walked out on him, he was at the end of his tether.

The police brought the man to spend the night at the station and started a search for his father. The latter was found working in Shanghai and had, in fact, been looking high and low for his son. In the end, father and son had a teary reunion in Suzhou.

... by setting certain keywords, AI can predict and assess buyers who might have suicidal tendencies through online interactions, and immediately alert the suicide intervention team.

Last September, China’s largest e-commerce giant Alibaba put together a suicide intervention team. It announced the “Safeguard Life” project in January this year, which would tap on AI, sellers, and the public security services, to build a system to provide support and intervention for people with suicidal tendencies.

Alibaba told Zaobao that by setting certain keywords, AI can predict and assess buyers who might have suicidal tendencies through online interactions, and immediately alert the suicide intervention team, who would then get in touch with the seller, contact the buyer, and provide support.

Several teams are involved in a 24-hour real-time handling of emergencies. Apart from the suicide interventionist team, psychologists from Alibaba’s “Cloud Doctor” platform would also provide professional advice, and the police would be called in whenever necessary.

Yang Shengnan is a suicide interventionist and a team leader. Born in the 80s, Yang used to be a criminal investigation specialist in China’s public security department, but moved into e-commerce customer service nine years ago. Her experience in criminal investigation has helped her to be more probing and analytical, and could be why she was picked to join the crisis management team a few years ago.

Yang said today’s fast-paced society and high-pressure work environment have triggered psychological issues in many people, and some extreme behaviour. In fact, suicidal tendencies among buyers are not uncommon.

Currently, the company has five suicide interventionists, who are all working towards higher professional qualifications in psychology and healthcare.

Since the coronavirus outbreak, Yang said the team has observed more cases of young people attempting suicide, and a greater number of alerts on the platform.

Most youths attempt suicide on the spur of the moment to rebel against their parents. When they realise that they would never see their parents again, most are frightened and regretful.

“Most suicide attempts are impulsive decisions,” Yang said. Once the decision is made, the ensuing 15 minutes is the “golden period” for intervention. Sometimes, even a little whisper has the power to stop a person from taking his life.

“Many children do not understand the meaning of death,” Yang added. Most youths attempt suicide on the spur of the moment to rebel against their parents. When they realise that they would never see their parents again, most are frightened and regretful. “That’s why I try all means to bring them back to reality,” she said.

Suicide interventionists put to the test

Virtual strangers to the possible suicide victim, suicide interventionists have to think fast to gain trust and enter the victim’s world within a short period of time. They are put to the test at every encounter.

This July, after some online browsing, a 19-year-old boy left a comment asking how much of a product he could eat before it would kill him. After receiving an alert, Yang immediately called the boy, who kept mum the whole time. All of Yang’s questions were received with a monotonous “Mmm” on the other side of the phone.

To close the gap between them, Yang replaced her profile photo with a gentler, younger-looking one before adding the boy on Wangwang. “Jiejie, is this you?” the boy texted.

“Yes, that’s when jiejie was younger. I was around your age then. I had just arrived in Nanjing and was having a very difficult time. I couldn’t find a job and was squeezing with others on public buses everyday…” Yang replied.

“Jiejie, I’m having a hard time too.” The boy finally broke his silence. It turns out that this 19-year-old boy suffers from moderate depression and has been relying on medication for a long time. When he was little, his mother remarried while his father went to prison. He has been living with his grandparents ever since.

He continued, “I want to live. But when I’m overwhelmed by my emotions, I feel like there’s nothing worth living for on this earth. My grandparents have also suffered a great deal for my sake…”

According to statistics from Alibaba, from September 2019 until today, this team has saved over 3,100 lives...

The pair continued chatting and the boy gradually gave up the idea of committing suicide. Over the next few months, Yang kept in contact with him, checked on him periodically and watched him come out of his shell slowly.

Like Yang, every other suicide interventionist has a contact list filled with a group of youths that they “brought back to life”. According to statistics from Alibaba, from September 2019 until today, this team has saved over 3,100 lives, and as a result, the 3,100 families behind them.

Every minute, an average of two youths commit suicide in China

Behind the emergence of suicide interventionists lies the reality that suicide, no matter how heavy and sensitive a topic, ought to be taken seriously. Statistics from the World Health Organization in 2015 show that suicide is the second leading cause of death among 15- to 29-year-olds, after accidents. As the people committing suicide are getting younger, youth mental health issues have drawn much attention in recent years.

An article from Deqing Women’s Federation (德清妇联), an official account of The Paper (澎湃新闻), says that suicide rates among China youths rank among the highest worldwide. Additionally, statistics from the child development centre of PKUCare Brain Health in China also show that approximately 100,000 China youths die of suicide every year. Every minute, an average of two persons die of suicide, while eight others are unsuccessful in their attempts.

In recent years, China has been strengthening its mental health services facilities and a total of 22 departments, including the National Health and Family Planning Commission and Publicity Department, jointly released the “Guiding Opinions on Strengthening Psychological Health Services” in 2016. This is China’s first macro policy guidance document that strives to strengthen the country’s mental health services.

The document proposes an emphasis on psychological crisis intervention and psychological assistance, as well as the establishment of a related model and its inclusion in emergency response plans and technical solutions. Various departments are responsible for establishing mental health services facilities in fields within their scope of duties.

A few major enterprises have also joined in the efforts, including the e-commerce industry that has a consumer base from various age groups. While having suicide interventionists is a new development, psychological consultation and counselling services are already the focus of some companies.

For example, during the Covid-19 outbreak, JD Health, a subsidiary of Chinese e-commerce giant JD.com, launched an online platform targeted at combating the pandemic, offering free psychological consultations for users suffering from nervousness, anxiety or obsessive-compulsive symptoms as a result of the pandemic.

Following the establishment of the suicide intervention team, Alibaba Group is planning to expand its psychological crisis intervention mechanisms through mobilising social resources. It plans to help those in need of psychological support both online and offline, and in its words “bring healing to the depressed”.

“A family becomes broken with every loss of life,” Yang said. Such tragedies can be avoided through a prompt and appropriate dissuasion. “I hope to be the person who extends a helping hand to them.”