A recent post from an official social media account of the Chinese authorities mocking India’s coronavirus situation has been removed following intense debate. Zaobao correspondent Yang Danxu speaks to Chinese academics, who note that such crass comparisons do no favours for China’s image in the international arena. 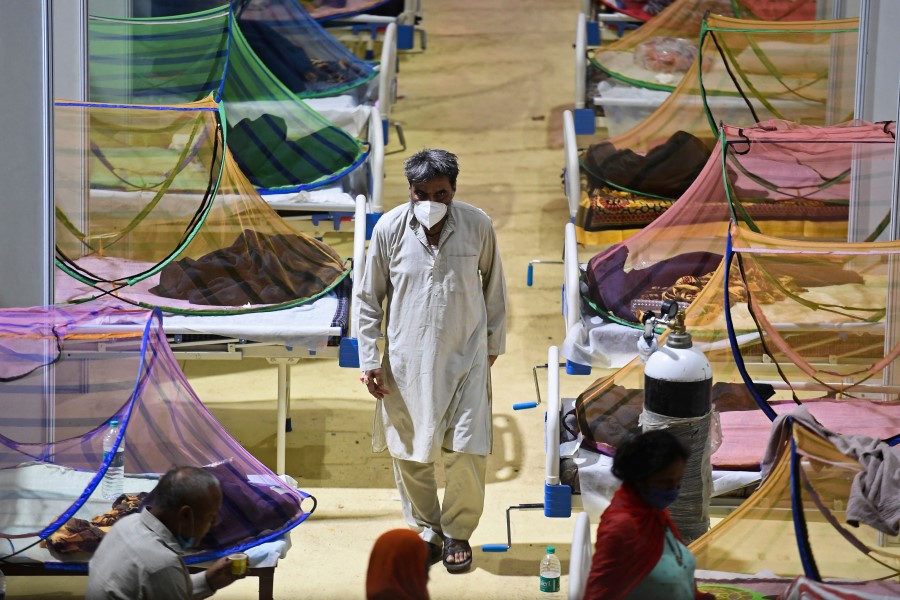 Patients who have tested positive for Covid-19 are seen inside a centre of the Commonwealth Games (CWG) village which has been temporarily converted into a Covid care facility in New Delhi on 2 May 2021. (Tauseef Mustafa/AFP)

Candice Chan - 20 June 2022
The newly launched Indo-Pacific Economic Framework for Prosperity has arguably low or no ambition around market access, but perhaps because of its non-contentious nature, could be a promising start. Countries in the region welcome options amid fears of Chinese economic coercion and may just provide the momentum needed when the time is ripe.
Read more
Translated by Candice Chan on 4 May 2021

A social media post from an account linked to the Chinese authorities mocking India over its coronavirus crisis has sparked intense debate over China’s comments on other countries. Some Chinese academics have noted that China’s aid to India is a big-picture strategy, while cold mockery of others tears down its national image.

Following a debate on Weibo between Global Times editor-in-chief Hu Xijin and Professor Shen Yi of the Department of International Politics at Fudan University, Center for China and Globalization research fellow Chu Yin joined the discussion yesterday with a post of his own. Questioning if China has lost its moral high ground by blatantly gloating at the pandemic going out of control in other countries, he asked, “Where is our national image? Where is our soft power?”

On 1 May, 中国长安网 (zhongguo chang'an wang), the Weibo account of the Chinese Communist Party’s Central Political and Legal Affairs Commission, posted an image of a rocket launch in China alongside a photo of the bodies of Covid victims being cremated in India, with the caption: “Lighting a fire in China VS lighting a fire in India.” The post was deleted after it sparked controversy.

“We need to think about what kind of image would be truly good for our rising country to present to a world that is uneasy about us.” - Chu Yin, Center for China and Globalization

Chu Yin said national image counts in China’s diplomacy and it has to take the moral high ground, and cannot disregard humanitarianism. “Not being a sheng mu biao (圣母婊, literally ‘virgin bitch’, meaning goody two-shoes) definitely does not mean acting like we lack humanity.”

Sheng mu biao is an internet slang term in China, meaning those who tolerate others with no principles or limits, regardless of the facts, and who advocate resolving all conflicts with ideas of “love” and “kindness”.

Chu described this as a “very serious diplomatic incident”. He gave a reminder: “We need to think about what kind of image would be truly good for our rising country to present to a world that is uneasy about us.”

The post in question sparked polarised debate among China’s internet community, and was tracked by some popular Weibo users. Prof Shen Yi had previously posted that the comparison was “quite good”, adding that if sheng mu biao wanted to get emotional, they should “go to India and burn some firewood”.

Hu Xijin subsequently published a post on Weibo beginning with the words “A discussion with Prof Shen Yi”, saying there was no problem with an ordinary person publishing a similar post in their own name, but an account from an official organisation needed to show restraint, and drawing traffic in such a way was not something an official account should do.

Shen responded that the Chinese saying of “being strict with oneself and lenient towards others” (严于律己，宽以待人) was not applicable to China’s interactions with the rest of the world, especially in strategic tussling.

Following last year’s border conflicts and India’s restrictions on Chinese tech companies, China-India relations are at a low. Early this year, India joined the Quad security grouping with its seemingly anti-China flavour, which was seen as India taking a pro-US stance in the current China-US competition.

Even as making friendly overtures and extending a helping hand as the pandemic sweeps through India is thought to be an opportunity for China to improve relations with India, some comments in China reflect a resistance to assisting India.

India’s current severe pandemic situation and high casualty rate counted as a humanitarian crisis. “The two incidents cannot and should not be linked…" -  director of the Center for Strategic and Peace Studies, China Foreign Affairs University, Su Hao

Su Hao, director of the Center for Strategic and Peace Studies at China Foreign Affairs University, pointed out to Lianhe Zaobao that friction between China and India “made Chinese people uncomfortable and unhappy with India, which is a fact”.

However, he thought that India’s current severe pandemic situation and high casualty rate counted as a humanitarian crisis. “The two incidents cannot and should not be linked… [China] cannot laugh at India’s difficulties because it is strong itself.”

Zhang Jiadong, director of the Center for South Asian Studies at Fudan University, also said, “At any time, mocking and deriving pleasure from other people’s disasters is wrong.”

Observers have noted that while some media do vie for audiences, the views they put forth do not necessarily represent the position of the authorities. However, in the later part of the pandemic, Chinese media did frequently make comparisons to highlight the government’s effective pandemic control.

On 2 May, news website Guancha.cn compared the scenes at a music festival in Wuhan with a demonstration against a lockdown in Brussels in Belgium, emphasising that “Wuhan is getting ‘high’ again, but looking at the rest of the world, the pandemic is still worrying”.

Zhang said, “The whole world is suffering, and we are unrestrainedly comparing their pain with our happiness… morally, this should not be happening; in terms of interests, ultimately this will do us no good.”