The US, albeit belatedly, and China are both extending aid to New Delhi in its hour of need in the fight against Covid-19, says Zaobao correspondent Yang Danxu. However, it seems that India has only responded positively to the US and is wary of China’s overtures. Are India’s fears justified? 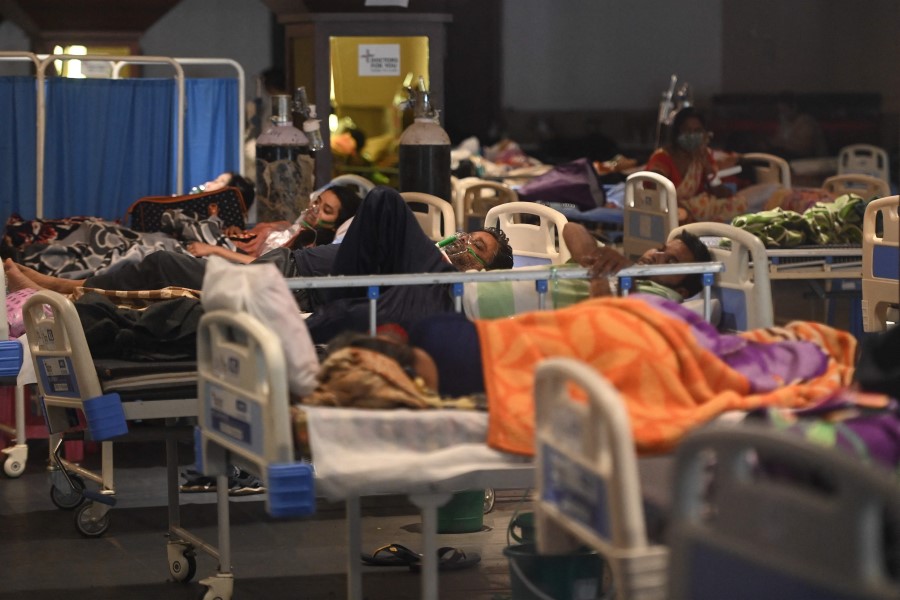 Patients breathe with the help of oxygen masks inside a banquet hall temporarily converted into a Covid-19 coronavirus ward in New Delhi on 27 April 2021. (Money Sharma/AFP)

Candice Chan - 20 September 2022
Li Cheng, director of the John L. Thornton China Center of the Brookings Institution, notes that well-educated and professionally capable military technocrats are prominently represented in the PLA leadership, and this trend is set to continue after the 20th Party Congress. What contributions will this new corps of military technocrats make as Xi Jinping heads into a likely third term?
Read more
Translated by Candice Chan on 28 April 2021

Following repeated calls, the US announced on 25 April that it will provide India with the raw materials for the coronavirus vaccine, as well as funding to set up vaccine production facilities. The US will also send medicine, rapid diagnostic test kits, ventilators and personal protective gear, among others.

The US and China reach out to India

US President Joe Biden tweeted: “Just as India sent assistance to the United States as our hospitals were strained early in the pandemic, we are determined to help India in its time of need.”

While it is better late than never, global sentiment including those expressed by US media such as Bloomberg holds that the US was slow to help India.

Now that a friend is in trouble, the Biden administration’s response is seen as not sufficiently proactive.

Since Biden entered the White House, he has been trying to win over India, which is also seen as part of Biden’s plan to ramp up security relations with allies and strategic partners in a bid to contain China. Just about a month ago, the US held a Quad leaders’ summit with India, Australia, and Japan, to discuss balancing China. Now that a friend is in trouble, the Biden administration’s response is seen as not sufficiently proactive.

On the other hand, Beijing has also been making friendly overtures to New Delhi. Since last week, China’s foreign ministry spokespersons have said several times at regular press briefings that China is willing to provide support and help according to India’s needs. And on 26 April, Wang Xiaojian, spokesperson of the Chinese embassy in India, said that China will encourage and guide Chinese companies to actively cooperate with India to facilitate acquiring medical supplies.

The Chinese embassy in Sri Lanka confirmed on Twitter that China has sent 800 oxygen concentrators to New Delhi, with 10,000 more to be sent in a week.

Welcoming one suitor and spurning the other

New Delhi has responded very differently to both countries. India took the initiative to seek assistance from the US, and then began communications on a government level. On 26 April, Indian Prime Minister Narendra Modi spoke with Biden on the phone, to discuss the coronavirus situation in India as well as supply chain arrangements for the vaccine raw materials.

However, the Modi administration so far has not made a direct positive response to Beijing’s overtures. While some Indian companies have ordered medical supplies such as oxygen concentrators from Chinese companies, such cooperation remains on a civilian level, and there has been no public interaction between both countries on an official level regarding the pandemic.

On 23 April, the Times of India even quoted official news saying that India hopes to import medical oxygen from overseas to ease the situation, but China is not among the countries where India is seeking oxygen imports.

India’s current Covid-19 situation is very severe. Based on statistics from the Indian Ministry of Health and Family Welfare, India reported 352,991 new Covid-19 cases on 26 April, hitting a record high of daily infections for five days in a row. It also reported 2,812 deaths, setting another record high.

Infectious disease experts think that the official number of confirmed cases and deaths may be undercounted and the real situation may be worse. This tsunami of Covid-19 infections has yet to peak — according to an internal government assessment, infections could peak in mid-May with 500,000 new Covid-19 cases per day.

As the pandemic has spun out of control, medical resources in various regions of India are running low, hospitals are in desperate need of oxygen, people are lining up for treatment, and even crematoriums are overwhelmed. People are forced to cremate bodies out in the open, making the situation unbearable. In Modi’s words, this second wave of infections is like a “storm” that has “shaken the nation”.

China-India relations had taken a nosedive following deadly border clashes last year. To Beijing, extending a helping hand to India from the less politically sensitive front of fighting the pandemic is an important opportunity to repair bilateral relations. From India’s perspective, the more external help the merrier. Besides, its close neighbour China has experience in containing the pandemic and has ample resources and production capacity at its disposal. But why is New Delhi so hesitant in accepting help from China?

Presently, the geopolitical situation of Northeast Asia is extremely complex, and India is an important part of the US’s Indo-Pacific strategy. While India traditionally does not form alliances, the Modi administration is leaning more towards the US than China. Indian analysts point out that New Delhi is wary of Beijing’s goodwill and worry that the hidden agenda is to undermine New Delhi’s relationship with Washington.

And there is reason for India’s concern. Following the escalation of India’s Covid-19 situation, Chinese commentary has largely focused on the US’s cold response to India’s request for help and attacked the US for not being able to provide practical aid to India. These reports are clearly aimed at telling India not to rely on the US and to improve relations with China instead.

Some in India also think that because China urgently needs to break up the anti-China alliance built by the US, accepting China’s aid means that India must reciprocate in geopolitical terms. Outwardly, Chinese officials have not shown any intention of using Covid-19 aid as a bargaining chip, but some Chinese netizens have suggested printing the words “China supports India” on the oxygen concentrators provided to India so that India would remember China’s good deed.