Chinese economics professor: Why we should not profit from natural disasters

In the wake of floods in Henan and the case of a hotel that raised its prices sky-high, Henan native and economics professor Li Jingkui gives a rejoinder to purists who swear by market-based resource allocation. He says sometimes, special circumstances warrant intervention to ensure an orderly distribution of resources. Profiting from the misfortune of others is certainly not a virtue according to Confucius or any good economist. 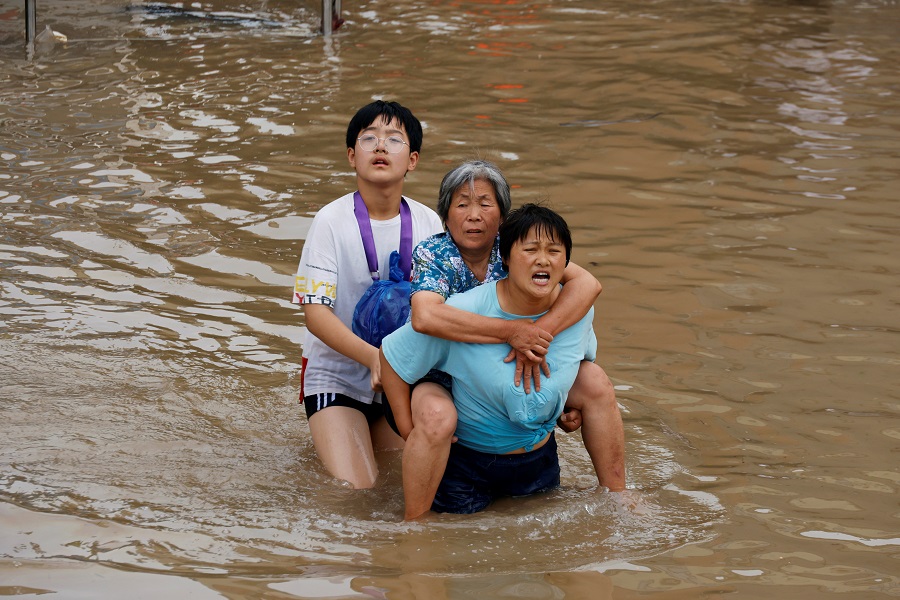 Grace Chong - 25 January 2023
With rumblings of US House Speaker Kevin McCarthy possibly visiting Taiwan in spring, Yang Danxu observes that this will not be the last we see of the “Taiwan card” being played by US politicians as they move into the second half of the current US presidency.
Read more
Translated by Grace Chong on 11 August 2021

On 20 July 2021, an ordinary Tuesday like any other, I met a group of friends in Shanghai for dinner. Someone said, “A meal was all the time it took for Zhengzhou to be flooded!”

I was shocked. I whipped out my phone and scrolled through the news. On the night of 20 July, heavy rainfall of an unprecedented scale rained down on Zhengzhou in a single hour. Since 17 July, my hometown of Henan province has been experiencing extremely heavy rains. Torrential rains hit the central, western and northwestern regions of Henan, while other areas experienced extreme torrential rains. After several checks, the National Meteorological Center of the China Meteorological Administration confirmed that Zhengzhou experienced a record-high hourly precipitation onslaught of 201.9 mm between 4 pm and 5 pm on 20 July. This meant that six months worth of Beijing’s annual precipitation fell on Zhengzhou in an hour.

I immediately called my loved ones living in Zhengzhou — my younger brother and his family, my classmates, and my friends — to see if they were alright and to forward various helplines and aid channels to them. All of them got back to me by 9 pm that night, after they were evacuated to safer ground. While they suffered some losses, their lives were not in danger and I could finally heave a sigh of relief. During this period, lecturer colleagues and friends who knew that I was from Henan called to ask about the situation there. These gestures deeply warmed my heart.

At the same time, people across the country have been paying close attention to the disaster in Henan and sending relief supplies to the disaster-stricken area. As someone from Henan who now lives miles away, I would like to thank these helpful and caring compatriots on behalf of the Henan people!

Taking advantage of the situation

Amid difficult times, it was reported on the news that accommodation prices for the Xana Hotelle near the Zhengzhou high-speed railway station went up to 2,888 RMB (around S$603) per night. The staggering figure drew much attention across society. The law enforcement inspection division of Zhengzhou’s market supervision bureau quickly investigated the matter, confirming that the hotel was guilty of jacking up their prices. Under China’s Price Law, the Xana Hotelle is believed to have used unorthodox means to push prices up too fast and too high. As the Xana Hotelle was quick to apologise and remedy the situation, Zhengzhou’s market supervision bureau let the hotel off with a 500,000 RMB fine.

Observably, whether in the East or West, there is no difference in how society deals with people who profit from natural disasters.

During natural calamities, it is infuriating to see price gouging, or prices being inflated for necessities, when people are already in difficult situations. I still remember the time when Hurricane Katrina, the costliest US hurricane in history, hit the US in 2005. When the hurricane gathered over the Bahamas in August 2005 and made its landfall in Florida, it gradually grew stronger, sweeping across Louisiana, Mississippi, and Alabama, causing catastrophic damages to residents in those areas.

The total economic damage from the disaster was estimated at around US$200 billion, with at least 1,833 lives lost. At that time, a resident from a neighbouring state realised that this could be a business opportunity because the hurricane would result in water and electricity outages in the affected areas. Hence, he bought 50 generators, transported them to the disaster zone and sold them for twice or thrice the amount he paid for them. Before long, he was detained by local police who then confiscated all of the generators. Observably, whether in the East or West, there is no difference in how society deals with people who profit from natural disasters.

The solution to all problems: raise prices

While these so-called “economists” claim to be proponents of the Chicago School of Economics, the fact is that they have merely read the first two chapters of any economics textbook and are parroting the concept of supply and demand at random. In actual fact, they know very little about economics. I disagree with the so-called market economy plan put forth by these “economists”.

Take for example the act of marrying someone and having children — in our society, this is something that cannot be done by simply adopting a market-based approach. China’s current male population exceeds its female population by more than 20 million among those aged between 18 and 60, posing a serious gender imbalance. To solve this problem, some economists proposed the idea of having several men share a wife, so that males of marriageable age no longer had to worry about being unable to find a wife.

Such a suggestion takes an exceptional situation that could only occur under specific constraints, and presents it as a solution for large-scale social problems! It has failed to consider the various conditions of its transaction costs. Some people defended the idea of sharing a wife. They said: After all, this is still a solution. Does anybody else have a better solution?

But the point I want to make is, from the perspective of the late British economist Ronald Coase of the University of Chicago Law School — a professor much admired by these people — if transaction costs are too high, leaving the problem unsolved is a solution in itself because maintaining the status quo is perhaps already the best solution.

We can do better

Reading Coase’s papers, I’ve always felt that his understanding of economics was enlightened and changed with the times and situation. His ideas did not remain stagnant or trapped in fixed theories. His wisdom is encapsulated in this Chinese couplet, “Living in this world, there is no fixed rule for dealing with others and doing things. When you understand this, you will realise that not having a fixed rule is a rule in itself. The world often doesn’t go according to your wishes. There seems to be no end to your troubles, so why not resolve them by not resolving them, and let nature take its course?”

The school of economic thought that worships the market like a religion should take Coase’s suggestion seriously — the spirit of the market is not that it is the only way of resource allocation, but that it provides an organisational system that reduces transaction costs. But in the short term, and especially under the special circumstance of natural calamities, this system may not be the most effective one. To deal with various survival problems, humans have developed other types of organisational methods, which could then be the optimal solution under certain circumstances.

The optimisation of resource allocation is the crux of economics, and raising the price is not the only means to achieve this.

For example, in the early stages of the Covid-19 pandemic in 2020 when there was a shortage of masks, would the pandemic have been better contained if mask prices alone were allowed to be raised? As the pandemic is an unpredictable external shock, the number of masks available in the short term is fixed. If prices are allowed to skyrocket in order to let the masks go to the highest bidder, the rich would be the ones getting the masks. But who are the people who need them the most at that point in time? The frontline healthcare workers and the people who have to work outside despite the pandemic. But these people are probably not the wealthy ones who can afford expensive masks. Thus, in such a short span of time when production capacity is inadequate in fulfilling demand, the standard allocation of a strategic resource like masks is more aligned with overall pandemic containment requirements.

The situation is the same with Zhengzhou’s Xana Hotelle. The disaster in Henan is far from over. Rain continues to pour and many rivers risk bursting their banks. Now, disaster relief should be the top priority of all social resources available. After all, price gouging at this juncture is equivalent to profiteering from disaster and stealing, which would once again make those who are already suffering feel exploited by their compatriots. Putting ourselves in their shoes, nobody wants to be in such a predicament. As Confucius once said, “Do not do to others what you do not want done to yourself.” Similarly, economics never assumes that human nature is inherently evil, or advocates profiteering from disaster or exploiting the disadvantaged.

The optimisation of resource allocation is the crux of economics, and raising the price is not the only means to achieve this.

This article was first published in Chinese by Caixin Global as “天灾与涨价”. Caixin Global is one of the most respected sources for macroeconomic, financial and business news and information about China.

Related: Zhengzhou floods: Netizens berate local government and media for inadequate response | Chinese butting heads with Western media: Irrational nationalism or deeds of justice? | Floods in China: Can the Three Gorges Dam weather ‘once-in-a-century massive floods in the Yangtze River’? | China will have too many mask-making factories | Is China facing a demographic crisis?