The constant pursuit of the high life in China, especially among young Chinese urbanites, often means that they are spending beyond their means. It does not help that financial companies and banks are encouraging people to take loans, while fans of celebrities and influencers are also nudged into chasing glamour. Given the circumstances, commentator Chip Tsao wonders if the Chinese authorities’ efforts towards an even distribution of wealth will work. 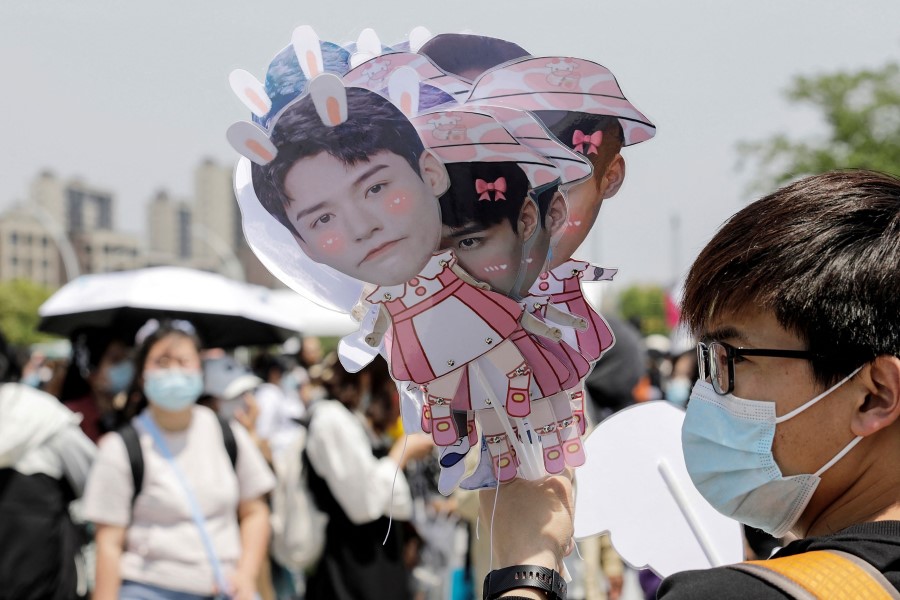 This file photo taken on 3 May 2021 shows a fan holding images of actors as fans wait outside the Suzhou Olympic Sports Centre Stadium before a concert with the theme of the Chinese television drama 'Word of Honor', in Suzhou in China's eastern Jiangsu province. From reality TV to online gaming and even pop stans, China's leadership has launched a crackdown on youth culture in what experts say is a bid to ramp up "ideological control". (STR/AFP)

Candice Chan - 18 January 2022
The first episode of an anti-graft documentary highlighted the case of former Vice-Minister of Public Security Sun Lijun, who built a personal following in the Communist Party of China (CPC) by helping other officials with promotions, despite not being among the very top leadership himself. How did he build up his clique? Zaobao correspondent Yu Zeyuan reports.
Read more
Translated by Candice Chan on 2 November 2021

The global Korean hit TV series Squid Game has cast the spotlight on the anxieties that the next generation have about the rich-poor gap.

Some have noted that the tragedy in Squid Game accurately depicts the so-called “black storm” in Hong Kong over the past couple of years.

However, an analysis piece in France’s RFI cited figures from Hong Kong’s left-wing newspapers, noting that half of those born in the 1990s in China are in pursuit of a so-called “high-quality life” — they buy branded luxury goods, while internet celebrities go for fine dining and the latest cars and end up heavily in debt, setting themselves up for the “Squid Game trap” with Chinese characteristics.

Hong Kong’s Wen Wei Po ran a report about mainland Chinese white-collar worker Ms Chen, who rents a luxury home worth some 10 million RMB, drives a branded car, and goes for the high life. Her rent is 20,000 RMB a month and she pays about 30,000 to 50,000 annually for the car. Ms Chen pours in all of her salary and does not make ends meet; she can only keep charging her bills to her credit card and pay only the minimum sum each month.

In 2021, a report on the spending habits of university students in China found that over half of them approved of the “spend first, pay later” way of life, or paying for luxury items in instalments.

Ms Chen is a senior project manager with a well-known PR company in mainland China, an industry that involves meeting clients all the time. And in the business sector, it is all about packaging. Marketing European brands for so long, this part of “Western civilisation” has rubbed off on her. And with Ant Group pushing its Huabei and Jiebei online credit platforms, nearly 60% of those born in the 1990s are hostages to a perpetual debt trap that they can never repay.

In 2021, a report on the spending habits of university students in China found that over half of them approved of the “spend first, pay later” way of life, or paying for luxury items in instalments. With such a social economy, how can China achieve an “even distribution of wealth”?

In the early 1950s, one word from Mao Zedong was enough to revoke 2,000 years of land ownership — title deeds were destroyed and landowners shot. The land became “common property”, which was the fastest way towards an even distribution of wealth. It was only in 1976, after Hua Guofeng arrested the Gang of Four, that he admitted that this experiment in an even distribution of wealth had brought China’s economy to the brink of collapse.

At that time, it was about getting rid of the landowners. Today, there are fewer farmers in China, with more young people in cities overspending on luxuries. Each month, about nine million university graduates move to the cities, and this population segment was not found in Mao’s China of the early 1950s. Back then, there were only landowners, farmers, a few large semi-colonial cities such as Wuhan, Shanghai, Tianjin and Guangzhou, as well as some industrialists and department store owners. In the early 1950s, there was no such thing as a credit card.

Even if the celebrity or influencer effect were smashed, and multi-arm financial companies like Alibaba were nationalised, how could the thinking of people like PR queen Ms Chen be changed on a fundamental level?

But today there is, and the addiction of overspending runs deepest among China’s young urbanites.

Coupled with the development of the film industry, over the past 20 years many big stars such as Fan Bingbing and Zhao Wei have emerged, earning astronomical sums for each production and living luxurious lives, and being spokespersons for major European brands. And they each have millions of fans, leading to an unstoppable wave of luxury overspending throughout China. And with Alibaba and state-run banks pushing loans, how could there be an even distribution of wealth today?

Even if the celebrity or influencer effect were smashed, and multi-arm financial companies like Alibaba were nationalised, how could the thinking of people like PR queen Ms Chen be changed on a fundamental level? How could she give up her luxury home and wear mass-market clothes, and embrace the “red genes” of the Yellow River Basin where she was born, and not hanker after a luxury home in Beijing or Shanghai?

The segment that Ms Chen represents is not interested in reams of tedious political reports. Before they even get to the spirit of the policy, foreign capital would have pulled out and the bubble finance supply chain would start to break apart, leaving them stuck in midair as they cry for help. Even before so-called even distribution of wealth can be achieved, we are seeing the sudden breakdown of asset bubbles. Sudden breakdowns and even distribution are two very different concepts. Are 1.4 billion people buckled up?

Related: Chic and trendy wet markets are the in-thing in China | China’s rising property prices have serious social consequences | Can the CCP forge an inclusive social contract and build a healthy civil society? | Rich and wealthy ‘little sisters’ are the new driving force of Chinese consumerism | How increased wealth affects Chinese foreign buyers' housing consumption in Singapore | The emergence of the Chinese “middle-class wannabes” and their race towards a higher social status