US-based researcher Wei Da feels that both China and the US need to make significant adjustments in their relations with each other, or else the scenario of a new Cold War and a real threat of hot war will not be far off. Who needs to understand that the world is different now, and adjustments have to be made? And who is the more backward party that has to adjust more? 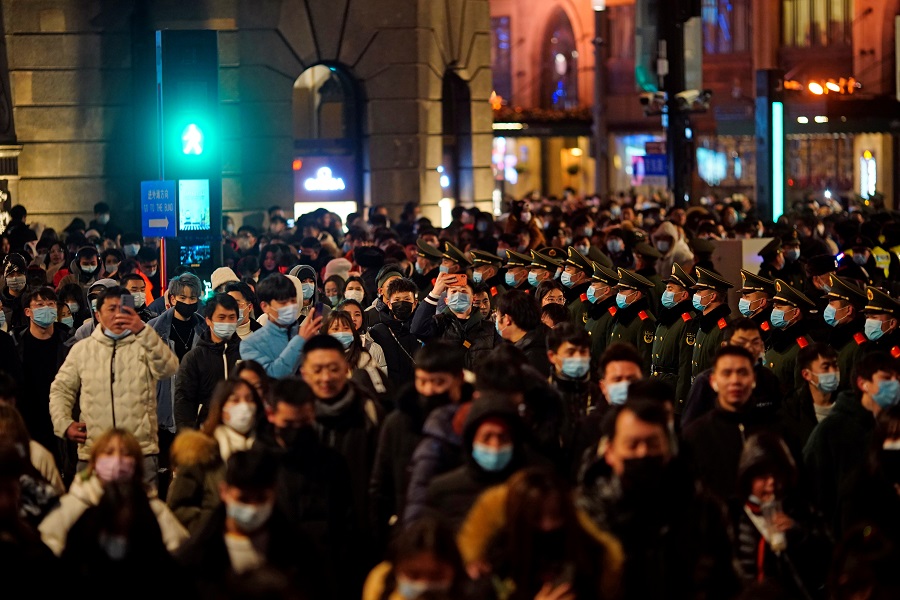 Paramilitary police stand guard as people gather to celebrate the arrival of the New Year near the Bund in Shanghai, China, 31 December 2020. (Aly Song/Reuters)

Grace Chong - 1 July 2022
Masayoshi Son, billionaire head of SoftBank Group Corp. may finally be able to push ahead with launching a US IPO for semiconductor and software design giant Arm Ltd., after wresting control of Arm China back from ousted CEO Allen Wu. It was no mean feat and a saga of twists and turns. But even now, some questions of Arm China’s shareholding and business remain unanswered.
Read more
Translated by Grace Chong on 12 January 2021

The year 2020 has been a memorable but difficult one. Our world was literally half-paralysed because of the raging pandemic. If not for the internet, 4G and 5G wireless communication technology, personal computers and smartphones that facilitated remote working, education and e-commerce, providing the ballast that was badly needed, the world could have faced total paralysis.

The pandemic has not only dealt a severe blow to the world economy but also brought deep political, social and cultural turmoil. A classic example is its impact on the 2020 US presidential election, which was originally thought to be a non-event, but the pandemic not only exacerbated the conflict between the left and right, but precipitated changes in election procedures and strategy. For some time, not only was the election outcome uncertain, but a constitutional crisis was brewing in the US to a certain extent. (NB: Congress has since confirmed President-elect Joe Biden as the next president of the US, but not before an unprecedented mob of Trump supporters stormed Congress on 6 January.)

Covid-19 containment measures taken by the East and West show similarities and differences between them in terms of culture, technology, and systems.

Even as the crises and traumas of 2020 remain, three major quandaries are looming ahead. Firstly, can the coronavirus be effectively contained and eliminated quickly? Although vaccines have been successfully developed and put to use, a mutant strain has emerged at the same time, posing a new challenge to vaccine effectiveness.

Covid-19 containment measures taken by the East and West show similarities and differences between them in terms of culture, technology, and systems. Although no effort was spared to manage the immediate problems and to find the underlying cause brought about by the coronavirus, it seems that China’s administrative measures won out against the West in dealing with the immediate problems. On the other hand, the West was able to develop an effective vaccine within a short amount of time, suggesting that they paid great attention to using scientific means to solve the root cause of the problem. Based on what was announced, China’s coronavirus vaccine is 79% effective, which is a far cry from the US’s vaccine efficiency rate of approximately 95%.

The US estimates that the vaccine’s effect on the overall pandemic situation would only be seen in early March, especially in certain developed countries and regions in the US, Europe and the Asia-Pacific. Also, the prospects of pandemic containment in numerous developing countries in Asia, Africa and Latin America are not good before the first half of the year.

We can confidently say that the pandemic will one day be overcome and that the global economy will eventually return to normalcy. However, the same cannot be said of the consequences of political opposition and the risk of war and conflict.

The second quandary is: can the global economy recover and bounce back quickly? Undoubtedly, whether the pandemic worsens or improves directly affects the strength and speed at which the global economy recovers — both are clearly inversely related. Of course, it also depends on the relations between the world’s major economies, that is, whether they are working or fighting with one another, as well as the adjustment, reorganisation, and extent of migration of global industrial chains.

Conflict the most costly price of the pandemic?

The third quandary is whether there is a solution to intense political antagonism and a heightened risk of war. In fact, this is the most critical one of all. We can confidently say that the pandemic will one day be overcome and that the global economy will eventually return to normalcy. However, the same cannot be said of the consequences of political opposition and the risk of war and conflict.

Taking China-US relations as an example, both countries have had close economic and trade ties, frequent cultural and people-to-people exchanges, no conflicts in terms of politics or geography, and normal dialogue and even limited cooperation on the military front. Now, China-US economic and trade relations have deteriorated with trade tariffs and talks of decoupling; cultural and people-to-people exchanges have essentially come to a standstill; ideological and geopolitical conflicts, as well as sanctions, are ongoing; and possible wars in the Taiwan Strait and South China Sea as well as on the cybersecurity front have become a flashpoint.

But the situation is different now — China is powerful and has risen. So, the crux is not so much how China can once again adjust to the US, but how the US can adjust to China.

History in this respect already foretells the future: in early 1972, US President Richard Nixon made his historic visit to China, meeting China’s top leader. While this was a major event back then, China and the US did not make major adjustments to their basic policy direction, and China-US relations remained stagnant for seven years. It was not until the end of 1978 when China began reform and opening up — a major change in political direction — that China-US relations finally improved.

So, what is befuddling now is that it is indeed true that China took the initiative to implement strategic and policy adjustments 43 years ago. But the situation is different now — China is powerful and has risen. So, the crux is not so much how China can once again adjust to the US, but how the US can adjust to China. This is a big topic. Due to space limitations, only one basic law can be discussed here.

Now, it does not count that you blow your own trumpet and say that you are powerful and have risen. One must base their comparisons on various development indicators and respective levels of civilisation. The more advanced party can adjust less, while the more backward party has to adjust more — this is common sense. Of course, there is another option: this is the way I am; I will not change. In that case, the outcome of the Cold War between the Soviet Union and the US can be used as a reference for the consequences of this choice.

Related: Why East Asia has performed well in containing Covid-19 | China set to overtake US economy sooner than expected, but it is worried | Chinese city offers trial coronavirus vaccine and people are queueing for it | Chinese academic: The US should set out to change itself, not China