Chinese academic: The US should set out to change itself, not China

Zhou Wenxing observes that the Biden administration needs to turn a new page on US-China relations. One way to do this would be to go with a derivative of the US’s engagement policy of the past. Only this time, it should not seek to change China, but change its own view of how cooperation and peaceful coexistence with China can be achieved in the next decade and beyond. 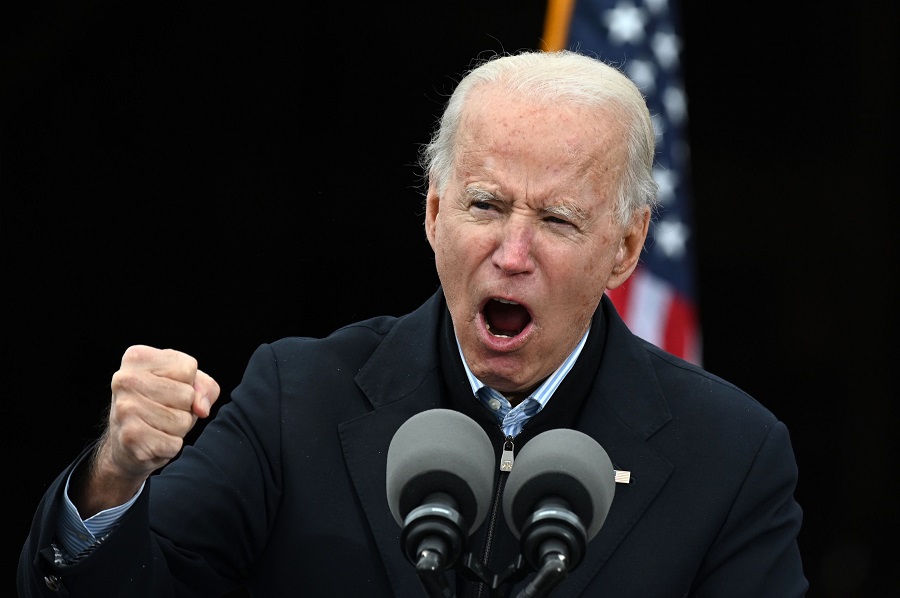 US President-elect Joe Biden gestures as he speaks during a campaign rally to support Democratic Senate candidates in Atlanta, Georgia on 15 December 2020. (Jim Watson/AFP)

Grace Chong - 11 January 2021
China’s Ministry of Commerce recently released new rules targeted at blunting the suppressive impact of the US’s long-arm jurisdiction statutes on Chinese companies. The method, however, looks likely to put stress on third-party companies supplying to Chinese companies. Would this be a case of cutting off the nose to spite the face?
Read more
Translated by Grace Chong on 30 December 2020

As the presidential election dust settles, it is time for the American people, as Biden says, to “turn the page”. After four years of total chaos and great uncertainty under the presidency of Trump, the US does need to turn a new page. In following its Build Back Better blueprint for recovery, the incoming Biden administration could start by salvaging damaged US-China relations and ushering in a new era of US foreign policy.

US-China ties have sharply deteriorated since the outbreak of a trade war in 2018. Fierce competition spilled over from traditional areas such as the South China Sea, Taiwan, Xinjiang, Hong Kong to new-found ones including technology, cultural exchange, diplomacy and ideology. A growing number of policy analysts and scholars in both countries are warning that the two largest economies are falling into the so-called Thucydides Trap and the gloomy prospect of inevitable war between Beijing and Washington, should the current Cold War-like confrontations go on.

The inauguration of the Biden administration on 20 January 2021, however, opens a window of opportunity to change course in the US’s rift with Beijing.

Firstly, Biden is expected to make more progress on foreign affairs as the Republican Party continues to seize the Senate majority. The US Constitution grants more power in foreign relations to the president and more power in domestic issues to Congress. As political polarisation intensifies, the Republicans are likely to boycott the Democratic administration’s bills regarding internal affairs, leaving more room for the latter to make achievements in external affairs.

The Biden-Harris transition team announced four top priorities: Covid-19, economic recovery, climate change and racial equality. Beijing and Washington’s coordination on the first three issues could be conducive to the two countries’ cooperation in the near future.

Secondly, Biden has already taken the first step to rectify US-China relations by viewing China as a “serious competitor” rather than “opponent”. Competition per se does not necessarily exclude dialogues and cooperation; vicious competition and ideological confrontations pushed by anti-China politicians like Secretary of State Mike Pompeo do. A second step for the Biden administration would be to manage and regulate US competition with Beijing in a constructive manner.

Lastly, and also most importantly, Biden and key members of his foreign policy team have expressed the idea of US-China cooperation on issues where the two countries’ interests converge. The Biden-Harris transition team announced four top priorities: Covid-19, economic recovery, climate change and racial equality. Beijing and Washington’s coordination on the first three issues could be conducive to the two countries’ cooperation in the near future.

China has controlled the pandemic and infused confidence in the market. In its latest report, the OECD predicts that China will be the only major economy to record positive performance in 2020 and that China is expected to account for over a third of world economic expansion in 2021. On the issue of climate change, Chinese President Xi Jinping announced further and more ambitious commitments at the Climate Ambition Summit on 12 December.

Taking all these factors into account, the Biden administration could, and should, hold dialogues on such important issues as soon as possible. This would help to re-establish its strategic mutual trust with Beijing step by step and pave the way for a constructive China-US relationship.

Challenges to changing course on China

Admittedly, the Biden administration would also encounter a number of challenges on its way to changing the US’s China policy.

The first challenge would be from Congress. While the president enjoys more power in foreign affairs vis-à-vis Congress, the separation of powers allows Republican lawmakers to introduce more anti-China bills to boycott the Democratic administration. Some Democratic lawmakers may also join Republicans due to a bipartisan anti-China consensus over the past years.

The record-high negative views that Americans have of China is another huge challenge. According to a poll by the America-based Pew Research Center, the past four years have witnessed a sharp decrease and increase in Americans’ positive and negative views of China respectively. Both trends have set new records since Pew released its first survey in 2005. Indeed, it would take a while for the public to improve their perceptions of other countries, particularly China.

The sharp increase in Americans’ negative views of China is best interpreted as a consequence of the Trump administration’s confrontational approach to China, as the Pew poll suggests. Trump’s recent moves, such as blocking US investment in firms linked to Chinese military and restrictions of travel to the US by members of Chinese Communist Party, are aimed at locking in the US’s China policy, and increasing the costs that future administrations have to bear if they attempt to reverse the policy.

But one should not exaggerate the enormity of these challenges, which are not that thorny compared to the potential catastrophe that can ensue from the breakdown of US-China relations. US policymakers must weigh the benefits against the costs of handling US-China ties appropriately: a long-term peaceful coexistence with China is preferable to forcing the rising power into a dead end.

In the last 45 years between Richard Nixon’s China visit in 1972 and Trump’s inauguration in 2017, the previous administrations have implemented their China policies mainly based on the paradigm of engagement and cooperation. The fundamental driving force behind this paradigm lies in the fact that cooperation with China contributed to US resistance against the Soviet Union in the 1970s and 1980s and terrorism in the first decade of this century.

... the paradigm of engagement during Nixon’s time was not a failure; what failed was the American elites’ myth of “changing China,” a belief which was always wishful thinking on their part to westernise China’s political system and ideology.

This paradigm shifted when China’s GDP surpassed that of Japan and became the world’s second largest economy in 2010. Washington argued that China posed a serious challenge to its dominance established after WWII. In order to contain China, the Obama administration soon put forward the “pivot to Asia” strategy. Under the guise of a “Free and Open Indo-Pacific" strategy, the Trump administration has for the first time adopted the paradigm of containment in its China policy.

The Biden administration must abandon the current paradigm of containment which has been deemed a failure. In fact, the paradigm of engagement during Nixon’s time was not a failure; what failed was the American elites’ myth of “changing China”, a belief which was always wishful thinking on their part to westernise China’s political system and ideology. Furthermore, cooperation with China also facilitated US national interests. The Biden administration must devise its China policy on practical considerations, and returning to the paradigm of engagement should be an option.

But an engagement policy 2.0 should not set out to “change China”, but to change the US itself. American elites must learn to accept China’s rise and accommodate its growing demands. Their refusal to cooperate with China would not prevent China from being stronger and their suppression of China would not bring the country down as well. Finding a means of peaceful coexistence with China via cooperation to resolve bilateral, regional and global issues might be the only way for Americans to turn a new page.

Related: Can Biden’s US lead the world? | Bumpy ride ahead for US-China relations after the US elections | Has Biden bared his fangs at China? | Can the US take a backseat in Asia and maintain peaceful coexistence with China? | Internal conflicts will be the downfall of the US | A leaders' word game: 'Secure and prosperous' vs 'free and open' Indo-Pacific | Chinese academic: How the West's perception of China plummeted in 2020