11 May 2022
By Wu Guo
Associate Professor of History and Coordinator of the Chinese Studies Programme, Allegheny College

American youths today are dealing with more issues and turmoil than their previous generations. US academic Wu Guo believes that the culmination of terrorist attacks, financial crises, social injustice and the ongoing Covid-19 pandemic have led to a generation that is more politically, socially and environmentally aware. These challenges and experiences could be a path for Americans to connect with the world outside of the US, in particular with China. 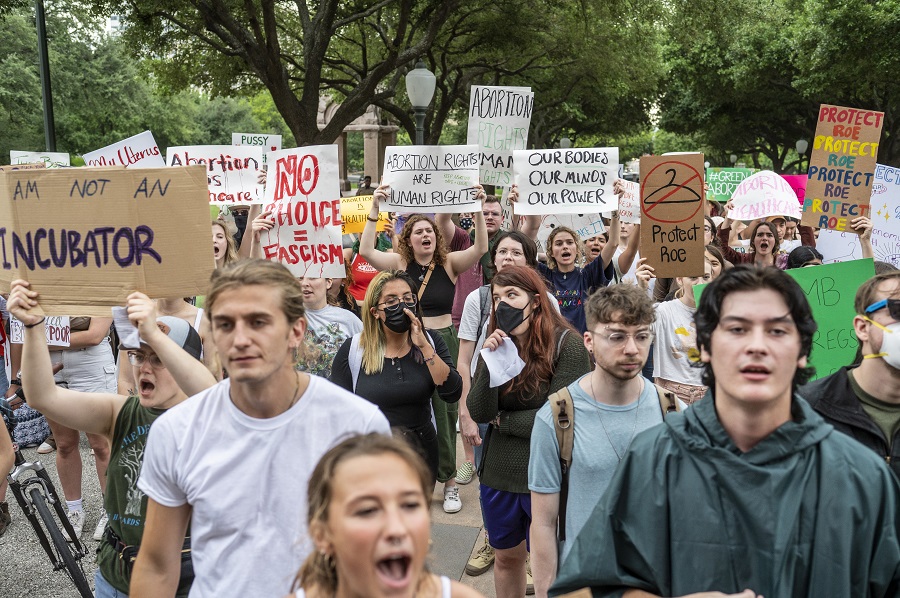 Demonstrators during a national walk out in support of abortion rights at the University of Texas in Austin, Texas, US, on 5 May 2022. (Sergio Flores/Bloomberg)

Grace Chong - 30 January 2023
Amid ongoing tensions, a high-level visit by US Secretary of State Antony Blinken to China in the coming week shows hope for improved relations between the two economic powerhouses. Zaobao correspondent Yu Zeyuan notes that while the meeting may not produce practical results, it is a much needed exchange to manage and control China-US relations from worsening.
Read more
Translated by Grace Chong on 10 May 2022

I am generally not optimistic about the future of China-US relations as I believe that the huge differences in Chinese and American cultures, belief systems and values, as well as the competitive relationship between both countries due to their close proximity in national strength and conflicting interests will make it difficult to fundamentally reconcile their political relationship.

However, the massive changes in American society and the rise of Generation Z (Gen Z) youths may mean that the possibility of dialogue and understanding between both countries is not gone but in fact more likely. That is to say, while the communication channels or room for manoeuvre based on practical cooperation might have been a lost cause for the older generation, it is still possible for the new generation to have dialogue based on shared values and common issues and concerns.

Harvard University academic John Della Volpe has been studying and following the cultural mentality of young Americans for a long time. His latest book, Fight: How Gen Z Is Channelling Their Fear and Passion to Save America, which expounds on his understanding of young Americans and their values, deserves the attention of Chinese readers.

He defines Gen Z as young Americans born during and after the mid-1990s (what China generally refers to as the post-95 generation) whose parents are generally born between the 1960s and 1970s. They are colloquially known as the “Zoomers” due to their huge consumption of online video platforms amid the Covid-19 pandemic.

Della Volpe believes that this generation of young Americans grew up in an environment of dramatic change and turmoil. From terrorist attacks and wars on terror, to financial crises, the Occupy Wall Street movement, the Trump phenomenon, the murder of George Floyd and the ongoing Covid-19 pandemic, this generation of youths has suffered constant blows to their mental health.

Due to various factors, he discovered that this generation is also more stressed, anxious and depressed than the older generations. They are most worried about mass shootings, rise in suicide rates, climate change and global warming, separation and deportation of immigrant and migrant families, and widespread sexual harassment and assault reports, in that order.

Because youths are a huge consumer group with the potential to become the mainstream market in the future, big companies cannot afford to ignore their opinions.

For Della Volpe, this generation of young Americans has started an extensive reflection on unchecked capitalism and believes that the American society is already under the control of big capital, and thus seeks a contemporary and ethical capitalism. Faced with a severe challenge — including the fact that the share of total wealth held by the US working class fell from 1.7% in 2009 to 0.3% in 2011 — they have no choice but to think about systemic inequality and economic justice.

In addition, while still seeking some form of spiritual practice or experience on a personal level, there has been a decline in the role of religion for these youths. There is also an element of social justice in this inclination, that is, a sense of moral sentiment that “if one suffers, all suffer”. Thus, while having unanimous support for stricter gun control laws, this generation of youths is also more concerned with poverty alleviation, the plight of immigrants and illegal immigrants, and the rights and treatment of minorities.

But Della Volpe also pointed out that young Americans are not passive in their reflections and protests but take on an active role in changing society and forming new mechanisms. Importantly, they pay attention to big companies’ stance on politics and social issues to determine their own consumer behaviour and identification with brands. Because youths are a huge consumer group with the potential to become the mainstream market in the future, big companies cannot afford to ignore their opinions. Thus, Gen Zs have effectively leveraged their role as a massive consumer group.

At the same time, young Americans are no longer interested in the conventional act of voting as a form of political participation, but instead, look to serve the community directly instead.

According to Della Volpe, young Americans have two strengths: their ballots and their wallets. At the same time, young Americans are no longer interested in the conventional act of voting as a form of political participation, but instead, look to serve the community directly instead.

Della Volpe’s research corroborates my long-term observations of young Americans, including the prevalence of mental stress and disorders, and an overall scepticism of traditional American capitalism, especially on core issues such as the sacralisation of gun ownership, Christian fundamentalism, the history of racial discrimination and existing racial issues that have yet to be solved, and large companies’ monopoly of the economy and media. At the same time, they are also more aware of environmental issues and the idea of directly serving the public.

... dialogues between China and the US should not be limited to established and institutionalised areas of government interest, such as disease prevention and climate change, but should also be extended to non-institutional issues that youths are concerned with...

I believe that these are commendable progressive tendencies that can help American society better understand and support the Asian community in the US. Indeed, the progress of American society itself has been achieved through generations of self-doubt, rebellion and revisions.

In this environment, dialogues between China and the US should not be limited to established and institutionalised areas of government interest, such as disease prevention and climate change, but should also be extended to non-institutional issues that youths are concerned with, such as community service, volunteer organisations, poverty alleviation and the equal distribution of wealth, and social justice and rights protection campaigns.

In these fields of practice or discourse, Asian cultures, societies and academics actually have abundant experiences and resources to offer to young Americans, including relationship models and culture, family ethics, gun violence prevention, the harmony between Man and Nature in Confucianism, Taoism and Buddhism, and empathy for the suffering and plight of others.

While Della Volpe’s research focuses on domestic issues in the US rather than the way young Americans see the world outside of the US, it is obvious that compared with previous generations, America’s Gen Zs have grown up in an era of a rising Asia and growing Chinese influence. Objectively speaking, China is no longer closed off and poor as it was during the Cold War period when the previous generation grew up.

... common global challenges and shared experiences and concerns that transcend ideological preferences, as well as more convenient means of communication, could become a basis for equal, honest and rational dialogue...

At the same time, globalisation has created “netizens” that have a common identity which transcends geographical borders. Social media and video sharing platforms, as well as online games, have all brought the younger generation closer together. This could arouse greater interest in the world outside that of the US, and help these American youths gain deeper insights and understanding of China beyond that of folk cultures such as Chinese New Year and dumplings.

I do not believe that people like the older generation of American China experts with warmth and compassion towards China will reappear. Nor do I pin my hopes on the emergence of a superhero who would turn things around. However, common global challenges and shared experiences and concerns that transcend ideological preferences, as well as more convenient means of communication, could become a basis for equal, honest and rational dialogue between the people of the same generation in the two countries.

Related: Fewer Chinese academics in the US will worsen US-China disconnect | Why the Americans know China better than the Chinese know the US | Are American universities veering too far left? | US academic: US-centric worldview and hostile policies hindering US-China exchanges | Mourning the dearth of China experts in the West with a deep understanding of China | New breed of American China experts see China with a colder eye