The belief that the Chinese know far more about America than Americans know about China is a misconception. In the age of globalisation and the internet, a knowledge asymmetry actually exists between the Chinese and the Americans — middle class Americans seem to have an understanding of Chinese culture, history and system based on rigorous academic research and analysis, but the Chinese lack the same level of understanding of the Americans. US academic Wu Guo shares his views on why the “knowledge deficit” exists in China. 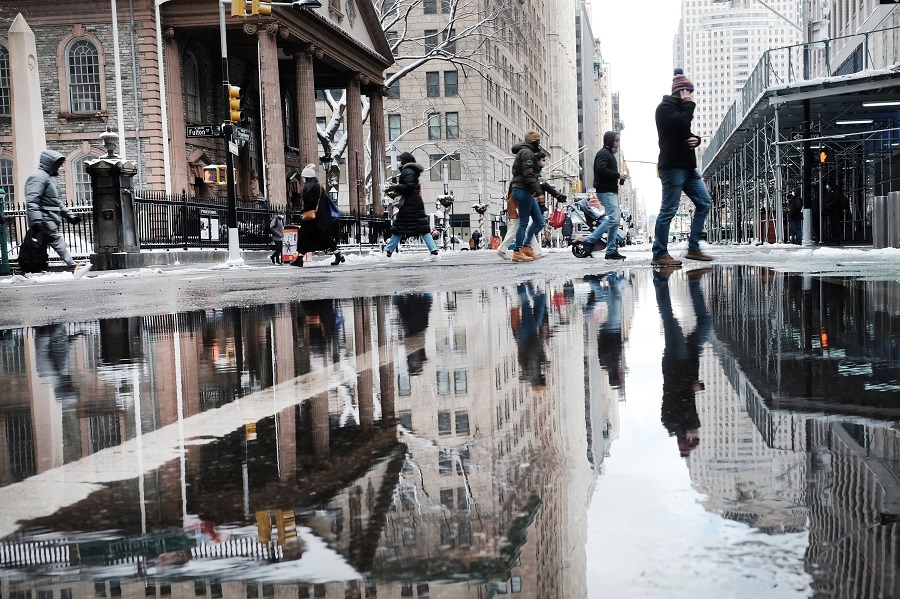 People walk through wet streets after a morning snow storm in Manhattan on 7 January 2022 in New York City, US. (Spencer Platt/Getty Images/AFP)

Grace Chong - 21 June 2022
Over the past several years, Chinese private firms have ferociously invested in India’s tech start-ups. Initially welcomed, China’s diversion of interest from erstwhile US investment has been viewed with some measure of suspicion since the Galwan Valley conflict. Are we living in a world where investment patterns are determined by statecraft? ISAS academic Karthik Nachiappan examines the issue.
Read more
Translated by Grace Chong on 22 February 2022

The generation of people born in the 1970s such as myself grew up in the golden age of China’s reform and opening up. It was an era dominated by pop music and entertainment, and people were generally enthusiastic about and admired the West.

In some Chinese intellectual families, parents that were attuned to the differences between China and the West often placed their hopes of going abroad on this generation. After all, in the 1980s, there was much anxiety about China's overpopulation and its economy lagging behind the West. The intellectual community even proclaimed that China could be “read off the face of the earth”.

Lacking in-depth understanding of the West

When I entered university in 1991, China’s reform and opening up suffered a temporary setback but people still yearned for the outside world. Every semester, full-time teachers from English-speaking countries would teach us English. Lesson materials included easily accessible magazines and newspapers such as Time, Newsweek and The New York Times, which gave us a glimpse of the US.

Our teachers from the UK, the US, Canada and Australia made the classes interactive, such as by making us sit in a circle for discussions, conducting debates and doing presentations on current affairs (I remember talking about the sensational news of an American teenager who was caned in Singapore).

However, due to the curriculum structure or perhaps the school requirements, our foreign teachers only taught us English. We did not learn about Western institutions, history, religion or culture, and were only given a simple overview of British and American society. While our textbooks were in English, their content resembled travel guides.

Apart from introducing students to popular culture such as Hollywood films (Home Alone was a big hit back then), these foreign teachers did not have the motivation or appropriate courses and reading materials to help students gain a comprehensive understanding of the US. Some foreign teachers were merely going through the motions as it was not that difficult to teach their native language to the Chinese students who already knew some basic English.

Once, one of the foreign teachers demanded that we submit our assignments by a certain time or it would be rejected. We followed her rules as it never crossed our minds that we could negotiate with a teacher. It was not until I became a teacher in the US that I realised that cooking up excuses and asking for deadline extensions was the norm for American college students.

Today, foreign teachers who are a common sight in China’s training institutions are still just teaching English, and are unwittingly helping to maintain a certain Hollywood-style illusion that people outside of the US have of the country.

...the US further embraced academics from different backgrounds and ethnicities, and successfully built a massive knowledge base...

The Chinese people who claim to understand the US often rely on information from Chinese news sources, or family members and relatives who have settled down or are studying abroad in the US. Their understanding does not come from rigorous reading, critical thinking or a deep analysis of the US.

In contrast, following the Second World War, the US developed a comprehensive and interdisciplinary US-centric regional studies system to learn about the rest of the world.

In the era of globalisation, with the goal of nurturing next-generation leaders and global citizens under the banner of “diversity”, the US further embraced academics from different backgrounds and ethnicities, and successfully built a massive knowledge base that not only allows people from other countries to share about their own country but also helps Americans in their understanding and research of other countries.

Language-teaching is just one component of this endeavour. For example, beyond teaching Chinese and introducing Chinese literature and films, there are Chinese academics teaching in universities across the US at the various humanities and social sciences departments, including history, philosophy, religion, political science, economics, sociology and anthropology; as well as at the Department of East Asian Studies.

Combining their rigorous academic training in China and the US with their personal experience, these Chinese academics offer American college students valuable knowledge, insights and perspectives on Chinese history, ideas and systems through detailed analyses in the classroom. The average American China studies academic who has never lived in China for a substantial period of time, would not be able to fill the role of the Chinese academics in providing such pedagogical interactions.

Many Chinese academics also have high expectations of themselves. A Chinese professor of history I know has reflected on ways to exclude personal experiences and emotions from interfering with the teaching of history. Another colleague also concurred that Chinese academics in the US should dissociate themselves from the material when they're teaching about China.

However, since the “self” exists and one’s unique background, perceptions and identity cannot be denied, it is impossible to completely dissociate ourselves from what we are teaching — and there is no need to deliberately do so.

Compared with Chinese people who only focus on learning English to understand the US, this group of American students will certainly have a more multidimensional, comprehensive, theoretical and empirical understanding of China.

Only a handful of US-based Chinese academics teach at top research universities. The majority of them teach at regular public universities and small liberal arts colleges. The students here seldom become researchers of China but instead become part of the middle class with a relatively in-depth understanding of China and who have a good grasp of China issues through rigorous reading and analytical writing.

Compared with Chinese people who only focus on learning English to understand the US, this group of American students will certainly have a more multi-dimensional, comprehensive, theoretical and empirical understanding of China.

This asymmetry can also be referred to as a “knowledge deficit”. As part of their profession, overseas Chinese academics will systematically transfer knowledge, analysis and research perspectives on China from various disciplines and sources to America’s future middle class in the classrooms, and also guide them in systematic reading, writing and preliminary research. The breadth and depth, as well as reach, of this process of knowledge transfer, far exceed the simple, casual and shallow transfer of knowledge by foreign teachers in China.

Furthermore, the latter would most likely have only received training in Teaching English to Speakers of Other Languages (TESOL) or applied linguistics. They would not have had a robust social science background, and are neither part of an academic discipline nor the evaluation system of Chinese universities. Some of them may even be unqualified to teach.

Thus, the belief that the Chinese know far more about America than Americans know about China that some media have propagated is just the opposite. There is a serious asymmetry in the dissemination of information between both sides.

As the two countries adopt different systems and immigration policies, China will not be able to absorb a large number of academics into its universities to teach about other countries, or evaluate teaching and research in the same way as the US.

China lacks an institutional structure and the academic environment that allow Americans to speak about the US in China and lacks the ambition to nurture global citizens.

As a result, middle class Americans who have a deeper understanding of China will outnumber the middle class Chinese who truly understand America. At the same time, it is also more likely for the Chinese to misjudge the US’s system and culture than vice versa. A truly effective judgement can only be made if it is based on a theoretical foundation and in-depth analysis, which is in contrast with the simple understanding of America that the Chinese have.

China lacks an institutional structure and the academic environment that allow Americans to speak about the US in China and lacks the ambition to nurture global citizens. Instead, Chinese internet celebrities brag about China, while American internet celebrities also exaggerate the peculiarities of Chinese society in order to boost online traffic and profit. Hence, it is inevitable that even students from top Chinese universities have a narrow, superficial and crude view of the world that is influenced by the internet.

Renowned international relations professor Yan Xuetong pointed out that students from Tsinghua University “look at other countries from a condescending perspective”. I believe this is largely because Chinese universities lack the mechanism that allows academics from the US and other countries to tell Chinese students about the realities of the outside world in a convincing, objective, rigorous and balanced manner.

Related: Are American universities veering too far left? | US academic: Equality is a myth, whether in the US or China | US academic: Learning Chinese is another political battleground for China and the US | Not just a tech war: What China can do to better compete with the US and create a better world