It may not be said, but some people feel that China owes the world an apology for being the source of the Covid-19 epidemic. How valid is this claim? Zaobao’s associate editor Han Yong Hong examines both sides of the debate. 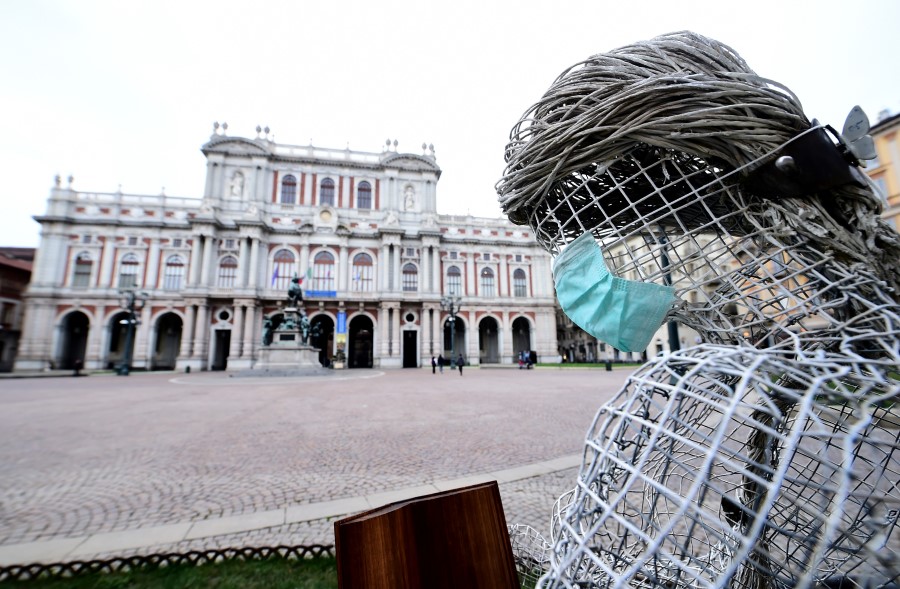 A face mask is attached to the sculpture at the Carlo Alberto Square, in Turin, Italy. (Massimo Pinca/REUTERS)

Candice Chan - 28 November 2022
Often referred to as the world’s economic “canary in the coal mine”, South Korea has seen its economy tumble over the past year, impacted by external factors such as US interest rate hikes and signs of recession in key trade partners. The accumulation of domestic factors — currency crisis, tumbling stock market and rising inflation — is also hitting the South Korean economy hard. However, this industrial powerhouse has the domestic means to climb out of the doldrums.
Read more
Translated by Candice Chan on 6 March 2020

The Covid-19 epidemic has spread from China to the rest of the world, with over 6,000 cases in South Korea and over 3,000 in Italy. The situation in Europe and the Middle East is also worrying, while gaps in epidemic efforts are showing in the US. Due to policy reasons and a shortage of test kits, some people were not promptly diagnosed. A man in New Hampshire showed symptoms after returning from Italy, but did not self-quarantine according to doctors’ advice, and attended a crowded concert instead — he was confirmed to have Covid-19 three days later.

As the world continues to combat the epidemic, on 2 March, Fox News host Jesse Watters made untimely comments pointing fingers at China, and asking China to apologise for the epidemic.

Watters said the epidemic started from China, claiming that the Chinese are “very hungry”, because the Chinese communist government cannot feed its people, and they eat bats and snakes out of desperation.

...some people have been quietly thinking it is all China’s fault for eating wild game and getting everyone into trouble, while the officials are hiding information.

Such racist comments are nothing new for the self-styled “political humourist”. In 2016, Watters came under fire for filming racist street interviews in New York’s Chinatown. And following his latest comments, there have been calls in the US for Fox News to get rid of Watters.

But the backlash to Watters’ request for an apology from China is not confined to the US. At a daily press briefing on 5 March, Zhao Lijian, a spokesperson for the Chinese Ministry of Foreign Affairs, said the remarks revealed Watters’ ”total arrogance, prejudice and ignorance towards China“ and that what he said was “preposterous and ridiculous”. China is sensitive about the epidemic, given its spread.

However, extreme remarks such as Watters’, reflect what some people think. Since the epidemic exploded in late January, amid the lockdown on Wuhan and panic in China’s neighbours, some people have been quietly thinking it is all China’s fault for eating wild game and getting everyone into trouble, while the officials are hiding information. Some China intellectuals also feel ashamed — in late February, former CCTV host Qiu Menghuang suggested on Weibo that China should apologise to the whole world. Some of my Chinese friends say apologetically on WeChat: “We’ve put you out.” (给你们添堵了)

So, does China owe the world an apology?

Rationally, in terms of handling the epidemic, China has taken measures that have worked, but there are also many lessons to be reviewed. In terms of international relations, it is an unreasonable and emotional reaction to ask any country to apologise for an epidemic.

This “credit claiming” is fighting racism with nationalism, which is also unnecessary.

First, not even the country of origin of an epidemic would want it to happen, since it is also affected. Second, whether it was the Hong Kong epidemic of 1968 (which killed nearly a million people worldwide in two years), the Asian flu in 1957, or the Spanish flu of 1918 that took tens of millions of lives around the world, there was no question of apologising. The H1N1 flu outbreak of 2009 also killed 18 people in Singapore.

Saying and thinking that China should apologise for Covid-19 is in fact another manifestation of doubts and prejudice towards China. These doubts and prejudice have to do with the psychological pressure China’s rise has exerted on other countries, and the changes in international order that it has created; some people are also playing up the situation. These have little to do with the epidemic itself. Epidemics are a global health issue, not an issue for any one country.

On the other extreme, some people on China’s social media are trumpeting that China single-handedly moved heaven and earth to control the epidemic, buying for the whole world a valuable window to fight the epidemic, which means China not only has no reason to apologise, but can unabashedly say that the US and the world owes China a “thank you”.

This “credit claiming” is fighting racism with nationalism, which is also unnecessary.

In fact, recent essays in the New York Times and the Economist have mentioned that China’s efforts have bought the world some valuable time, and the Economist called for this time to be used well. Bruce Aylward of the World Health Organisation (WHO) also publicly praised China’s sacrifices and contributions for being the first line of defence to prevent the international spread of the virus and changing the course of the epidemic, averting tens or hundreds of thousands of cases — the world owes Wuhan this.

So, what do China and the world owe each other?

As the saying goes, the world is fair. As various countries deal with the epidemic, they will better understand China’s difficulties. For China, its primary aim in fighting the epidemic is to protect its own people and benefit others — that should be the intention. On the contrary, unabashedly asking for thanks on WeChat and having the authorities share the post is undignified.

So, what do China and the world owe each other? At the moment, that would be mutual understanding and cooperation. A public health issue lies before us, and everyone needs to halt the rivalry and come together to overcome the current obstacles.