Despite the decline in daily new Covid-19 cases over the past week, Shanghai has seen stricter anti-epidemic controls implemented to the point of absurdity. Zaobao correspondent Yang Danxu highlights the stranger-than-fiction happenings in Shanghai that have sparked public outrage and shaken people’s confidence in China’s zero-Covid policy. 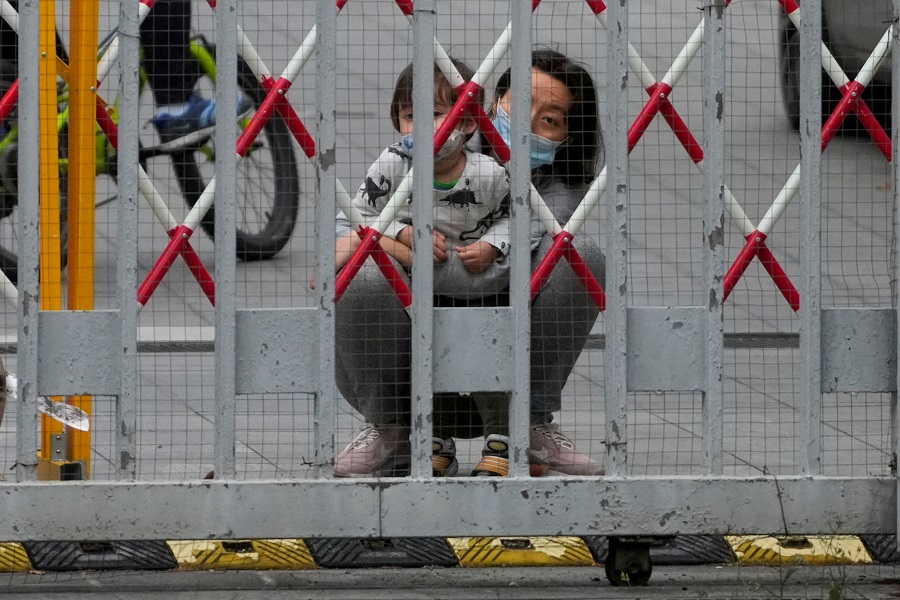 A resident and a child look out through gaps in the barriers at a closed residential area during lockdown, amid the Covid-19 pandemic, in Shanghai, China, 10 May 2022. (Aly Song/Reuters)

Grace Chong - 21 June 2022
In pursuit of better working conditions, China's post-00s generation has gained a reputation for being newbies who are difficult to manage and who show their superiors little respect. While those who go to extremes may be in the minority and some admire their brave fight for workplace rights, ultimately, they may be putting their job prospects in jeopardy.
Read more
Translated by Grace Chong on 13 May 2022

The article recounts people’s experiences in their attempts to leave Shanghai by all means since the city went into lockdown. While Shanghai Pudong International Airport is an exit point, it has also become a place filled with the sorrow and helplessness of these “escapees”.

'Escapees' stranded at the airport

Mikey (pseudonym), a 17-year-old student, recently received news that he had passed the Beijing Film Academy’s art school entrance exam and urgently needed to return to his hometown by June to sit for his arts gaokao (the National College Entrance Examination).

He was somehow ferried to Pudong Airport in a police car, but got stuck in a seemingly never-ending cycle of having his flight tickets repeatedly cancelled. After over 20 flight cancellations, he had no choice but to stay put in the airport.

During his stay at the airport, Mikey was caught in various bizarre situations. When he stepped out of the airport for a few seconds to collect his food delivery, he was stopped by a security guard on his way back in, who demanded to check his negative nucleic acid test result taken within the last 48 hours.

He saw stranded escapees stealing food from a shuttered speciality store, people leaving on chartered flights, and even some boarding the plane with their pets.

One of these escapees was a middle-aged man who left his hometown in Shandong in March to come to Shanghai to help construct makeshift hospitals. After a month he needed to return home because his father had fallen ill, but he eventually became stranded at Pudong Airport.

His journey from Baoshan district to the airport was a difficult one — he walked, rode on electric scooters and rental bicycles, and even climbed over a barbed wire fence to avoid the police at a checkpoint.

They draw strength from one another, fighting for tickets together and sharing tips on how to leave Shanghai in the hopes of escaping as soon as possible.

Another escapee, a worker from Shanxi, was unable to stock up on food and had nothing to eat following the Covid-19 outbreak in one of Shanghai’s urban villages (城中村, once-rural communities that are surrounded by urbanisation and have commonly become cheap housing for migrant workers).

He tried all means possible to leave his residential community, walking over 20 kilometres while carrying heavy luggage to reach Pudong Airport — only to end up stranded there.

These drifters have no choice but to sleep on the floor and fill their stomachs with instant noodles — the only thing that the airport sells. They draw strength from one another, fighting for tickets together and sharing tips on how to leave Shanghai in the hopes of escaping as soon as possible.

Their stories have stirred up mixed feelings for people, as if life is imitating art and the film The Terminal is playing in front of their eyes, albeit with less romance and more dark humour.

Mikey recounted the time when he was called out for not wearing a face mask. He said, “Nobody cares if you are dead or alive. But if you don’t wear a mask, only then will you draw attention.”

We will never know if parts of these stories are fictional, but based on the comments of Chinese netizens, there are many people who have had similar experiences.

Many people are asking, why are the measures in Shanghai becoming harsher when the situation is easing?

Who would have thought that Shanghai — the most developed and civilised city in China — would see such absurdities because of a pandemic. One netizen suggested making a movie out of the stories of these escapees stranded at Pudong Airport. The title would be “Leaving Shanghai” (离浦, a homonym of 离谱, which means "absurd").

After nearly six weeks of lockdown, Shanghai’s epidemic situation is gradually looking better. Since last weekend, new daily cases have declined to below the 4,000 mark, recording around 3,000 cases as of 10 May. However, public sentiment has not improved; the outrage over the anti-epidemic measures has even reached a new peak recently.

Over the past few days, there has been a strong backlash against the approach of implementing quarantine on an entire residential community for a single positive case, and forcing those taken away for quarantines to give up their keys for home disinfection, as well as some anti-epidemic workers’ adamance in saying “you are positive because I say you are”.

Many people are asking, why are the measures in Shanghai becoming harsher when the situation is easing?

The answer might lie in the policy meeting of the Politburo Standing Committee on 5 May, which again set the tone on whether China should persist with its zero-Covid approach or live with the virus.

The meeting did not mention the dual goal of epidemic prevention and economic growth, but instead heavily prioritised epidemic control. It declared the need to “unswervingly adhere to the dynamic zero-Covid policy and resolutely fight any attempts to distort, question or dismiss China’s anti-Covid policy”, while stressing that it must win the “battle for Shanghai”.

The Shanghai Party Committee and the municipal government subsequently also held a meeting where orders were given to “clear obstacles, charge forward, and fight for victory in Shanghai”.

With such orders to obey, committee members and government officials have also spoken up. In a speech circulated online, Pudong New Area party secretary Zhu Zhisong said, “We will achieve this mission at all cost, even if we are smashed to pieces in the process.”

... there have been many cases of abuse of power, which for many people goes against the limits of rule of law and common sense.

It is unclear whether the authorities have set a timeline to achieve zero Covid in Shanghai, but under high political pressure, Shanghai has started a battle that it cannot afford to lose.

Looking at the city’s efforts over the past few days, the orders to control the outbreak that has been passed down are being strictly implemented on the ground, so much so that there have been many cases of abuse of power, which for many people goes against the limits of rule of law and common sense.

The ensuing complaints, anger and conflict have simmered along with the anxiety and hopelessness of a seemingly unending lockdown that has lasted over a month, and the people’s confidence in China’s zero-Covid policy has taken a hit as a result.

While many hope that Shanghai beats the outbreak quickly and the city recovers its vibrance, but if winning this battle means focusing only on politics, and ignoring science, rule of law, common sense and proper care, Shanghai’s anti-epidemic efforts could just end up being a mix of mumbo-jumbo and absurdity.

Related: Shanghai's worsening Covid-19 outbreak is turning political | Pandemic in China: Will Beijing repeat Shanghai's mistakes? | Shanghai's Covid shutdown is disrupting domestic and global supply chains | Can Shanghai meet its zero-Covid deadline and resume production? | Singaporeans in Shanghai: How to cope when a city shuts down during the pandemic | Best of both worlds: China wants both zero-Covid and economic growth | [Comic] When Shanghai residents fight over vegetables