Singaporeans in Shanghai: How to cope when a city shuts down during the pandemic

Zaobao correspondent Chen Jing speaks with Singaporeans who are based in Shanghai to find out how the resurgence of Covid-19 cases has impacted them. While some have gone through great pains to escape the locked down city, others have stayed behind, sharing the hardship — and joys — with the local community. 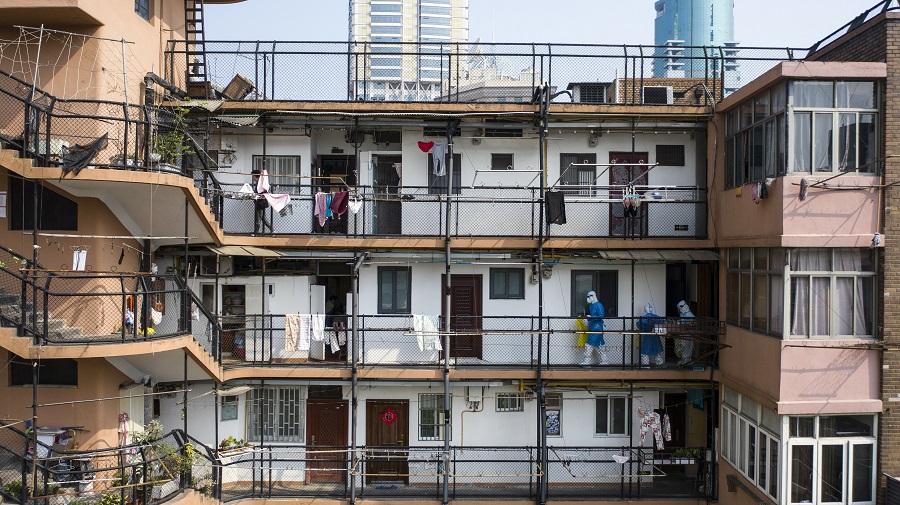 Quarantine workers in personal protective equipment (PPE) at a residential building during a lockdown due to Covid-19 in Shanghai, China, on 20 April 2022. (Qilai Shen/Bloomberg)

Grace Chong - 21 June 2022
In pursuit of better working conditions, China's post-00s generation has gained a reputation for being newbies who are difficult to manage and who show their superiors little respect. While those who go to extremes may be in the minority and some admire their brave fight for workplace rights, ultimately, they may be putting their job prospects in jeopardy.
Read more
Translated by Grace Chong on 26 April 2022

On the morning of 14 April, Sun Zhi Xing was anxiously waiting in his Shanghai home for his ride to Shanghai Hongqiao International Airport. He was adamant that even if the driver did not show up, he would cycle all the way to the airport and catch the flight back to Singapore.

Sun had wanted to return to Singapore after the lockdown in Shanghai’s Puxi was extended in early April. He told Zaobao that he had returned to Shanghai from Singapore in mid-February, but shortly after completing his quarantine upon arrival, Shanghai experienced a resurgence of Covid-19 cases. He has been working from home ever since as a result.

Sun has been cooped up at home for two months with no end to the lockdown in sight. His family in Singapore are worried for him. Meanwhile, his company has an overseas business trip planned for him. These factors prompted him to return to Singapore.

Sun then moved on to tackle the most difficult problem: how to get across the river from his residence in Puxi to Shanghai Pudong International Airport.

After booking his flight online, Sun first reported to the residents’ committee to apply for a pass to leave the residential compound. In order to successfully board the plane, he would also need to produce negative PCR and ART test results taken within 48 and 24 hours respectively prior to flying. He made appointments at two hospitals for the PCR test to ensure that he would receive his results on time.

Sun then moved on to tackle the most difficult problem: how to get across the river from his residence in Puxi to Shanghai Pudong International Airport. This seemingly ordinary task has become a mammoth undertaking in a locked down Shanghai.

As taxi companies and ride-hailing platforms have suspended their operations, Sun’s friend referred him to a “resourceful” driver who would send him to the airport for an exorbitant price of 1,200 RMB (US$183).

Sun thought that things would work out, but the driver unexpectedly cancelled the job a week ahead and Singapore Airlines subsequently cancelled the scheduled flight due to the grim Covid-19 situation in Shanghai.

Sun immediately booked a new flight on China Eastern Airlines and found a different driver. As the new driver was only licensed to travel within Puxi, Sun was advised to take the airport shuttle bus to Pudong Airport after he was dropped off at Hongqiao Airport in Puxi.

On the morning of his departure, a 20-seater bus arrived at the entrance of Sun’s residential compound, but he was the only passenger on board. The city before him appeared strangely unfamiliar.

Sun received a call from an airport staff asking why he was allowed to leave the residential compound, who issued his pass, and his purpose for returning to Singapore.

At 7 am, Sun boarded the airport shuttle bus from Hongqiao Airport to Pudong Airport with more than 30 other passengers. He completed the check-in procedures of collecting his boarding pass, checking in his luggage and selecting his seat.

After passing security checks and while on his way to the boarding gate, Sun received a call from an airport staff asking why he was allowed to leave the residential compound, who issued his pass, and his purpose for returning to Singapore.

He quickened his pace while answering the questions, and heaved a big sigh of relief once he boarded the plane. He remarked, “I am finally going home.”

“I have a traditional Singaporean mindset, if the government announces four days of lockdown, I will believe that it actually means four days.” — Ashley Ng, Singaporean in Shanghai

Over the course of Shanghai’s lockdown, while some Singaporeans like Sun have successfully returned home after jumping through hoops, others have stayed put in Shanghai, sharing the hardship with 25 million local residents and experiencing a new side to this “mystical city” (魔都, a nickname for Shanghai from a 1924 novel by Shofu Muramatsu).

Ashley Ng, who lives in Huangpu District, only stocked up enough food for less than a week when she received the notice of Puxi's lockdown. She said wryly, “I have a traditional Singaporean mindset, if the government announces four days of lockdown, I will believe that it actually means four days.”

Ng began to panic as the lockdown period was extended; fortunately, her company helped her and other employees to get in touch with a grocery supplier. However, Ng found that the supplier had a minimum order requirement — eggs were sold by the basket and vegetables had to be delivered by the box. She was forced to become a “group-buy organiser” and share the supplies with her neighbours.

In the process of organising group purchases, Ng, who works in the financial technology industry, found that there were many elderly people who have been left behind by the digital technology in this financial hub, home to advanced e-commerce businesses.

She said, “After some elderly people who live alone receive the eggs from their order, they do not know how to use WeChat to transfer money and instead pay me in cash. This is the first time I have seen cash in more than a year since I came to China!”

Although there is no longer a food shortage, the prolonged high-pressure environment has left Ng feeling stressed. She said that due to the severe epidemic situation in Huangpu District, daily PCR tests are required in the residential community. She is living in fear every day, worried that if she tests positive, she will need to stay in a makeshift hospital.

She said, “If it weren't for the fact that it might be difficult to come back to Shanghai after returning to Singapore, I would have already bought a plane ticket to go back home.”

The good amid the chaos

Strict lockdown measures and unpredictable anti-epidemic policies have troubled many Singaporeans residing in Shanghai. However, designer Kent Lau has drawn inspiration from his distress and concerns amid the lockdown. He has recorded his experience and feelings in the form of daily comics and gained a social media following as a result.

Most of Lau’s comics focus on satirising the absurd happenings in the locked down city, but his comic style changed the day after Easter.

On the day that Shanghai announced the dividing of the city into east and west of the Huangpu River to implement phased lockdowns, Lau drew a cartoon depicting how Shanghai became Kaifeng (“开封”, the name of a city in Henan, which literally means “open up and lockdown”) overnight. The cartoon also marked the beginning of his “Lockdown Comics” series.

The large number of eggs hoarded in people’s homes became the main characters of the "egg" series: the “foolish egg” (傻蛋) who is baffled by the lockdown policy, the “onsen egg” (温泉蛋) who chooses to relax and lie flat (躺平), and the “ma dan” (妈蛋, internet slang for expressing strong emotions, which literally means “mother egg”) who gets angry when it can’t get hold of groceries.

Most of Lau’s comics focus on satirising the absurd happenings in the locked down city, but his comic style changed the day after Easter. He explained that on the night of Easter, there was good news shared in the community chat group: a neighbour had given birth during the lockdown, and both the mother and child were doing well.

“This news moved me to tears, so I started to draw a heartwarming ‘Easter egg’, wishing that the newborn will be treated kindly by the world,” he shared.

Lau has been sharing his artwork on WeChat Moments and with WeChat groups every day.

This situation has prompted Lau to reconsider what he would do when Shanghai’s lockdown restrictions are lifted. He said that some people hope to return to their normal lives, but he is more eager to take this as an opportunity for “rebirth” and explore new possibilities in the city where he has lived for more than ten years.

Lau has been sharing his artwork on WeChat Moments and with WeChat groups every day. As a result, his WeChat Channels account has gained over a hundred followers, including neighbours in his residential community and other Singaporeans residing in Shanghai.

He said, “Many mothers have asked me if I could sketch pictures of their babies after the lockdown restrictions are lifted. Other people are hoping that I open a virtual art class to teach drawing. I will consider trying these out.”

Related: Can Shanghai meet its zero-Covid deadline and resume production? | Why is China obsessed with zero-Covid? | Shanghai's worsening Covid-19 outbreak is turning political | As the virus spreads, can China calm its people and contain the outbreaks? | Chaos in Xi’an: From zero-Covid to ‘zero cases in communities’ | When Beijingers can't return home: Is China going overboard with its zero-Covid measures? | China's zero-Covid regime: My home quarantine experience in Beijing