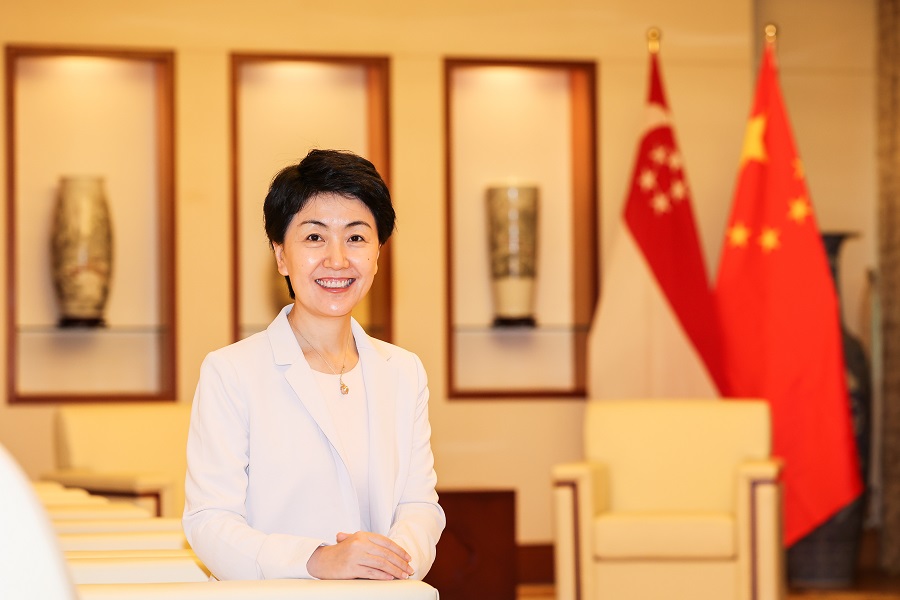 Grace Chong - 25 November 2022
China’s resurgence of Covid-19 infections has widened the gap between the young workers opposed to the tightening of controls, and the older generation that feel safer with strict measures in place. Given that the elderly make up a high proportion of the Chinese population, Chinese authorities seem to be holding fast to the dynamic-zero policy. Zaobao correspondent Wong Siew Fong tells us more.
Read more
Translated by Grace Chong on 31 August 2022

She attended the National Day Parade celebrating Singapore’s 57th birthday at The Float @ Marina Bay on 9 August. The cheering crowd and Singapore flags waving in the air reminded her of an interview with Singapore’s founding Prime Minister Lee Kuan Yew she had seen in her school days. He had spoken then about “building a strong and courageous society and a vibrant nation”.

“In that moment at the parade, I truly felt his vision,” she said. Moved, she added that China has witnessed, supported and actively participated in Singapore’s magnificent developmental journey. Likewise, Singapore has also keenly supported and played an active part in China’s rapid development since its reforms and opening up to the world.

“That is why China and Singapore share the same spirit: we must unite and continue to strive for a better future,” she said.

Ambassador Sun is the 12th Chinese ambassador to Singapore. After graduating from Peking University with an LLD in Law, she worked for many years in the international department of the Central Committee of the Communist Party of China (CPCID). She has also been the director of the CPCID’s research office, the director-general of the China Centre for Contemporary World Studies, and concurrently the director-general of the Public Information and Communication Bureau and the CPCID spokesperson.

Prior to her posting to Singapore, she was the director-general of Bureau I of CPCID, responsible for exchanges with political parties, governments and political organisations in nations in South Asia and Southeast Asia. Thus, Ambassador Sun has visited Singapore and Asia many times, and during previous party exchanges, has called on Prime Minister Lee Hsien Loong, Deputy Prime Minister Heng Swee Keat and other senior cadres of the People’s Action Party.

... China-Singapore relations were initiated and progressed under both nations’ leadership from the very beginning. As the saying goes, “With great elevation comes a commanding perspective.”

A relationship that stands the test of time

Ambassador Sun went on to elaborate on the six dimensions of China-Singapore relations: elevation, depth, breadth, solidity, richness and warmth.

She noted that China-Singapore relations were initiated and progressed under both nations’ leadership from the very beginning. As the saying goes, “With great elevation comes a commanding perspective.” The leaders had set the direction for bilateral cooperation based on the fundamental and long-term interests of both nations, and solved problems from the vantage point of this great “elevation”. Consequently, China-Singapore bilateral relations have been stable over the long term despite turbulence in the world.

Those familiar with Singapore-China relations would know that although Singapore and China established diplomatic relations in 1990, the leaders of the two nations made contact as early as the 1970s. In 1978, Chinese leader Deng Xiaoping visited Singapore at the invitation of Lee Kuan Yew, paving the way for bilateral cooperation and establishing the tradition of frequent exchanges between the leaders of both nations. After 1990, as China intensified its process of reform and opening up, Singapore-China bilateral cooperation gathered pace. In 2008, Singapore became the first Asian country to sign a comprehensive free trade agreement with China (the China-Singapore Free Trade Agreement, CSFTA). In 2015, China, under the leadership of President Xi Jinping, and Singapore affirmed Singapore-China relations as an “all-round cooperative partnership progressing with the times”.

Speaking about the “depth” of China-Singapore relations, Ambassador Sun elaborated on two aspects: profound mutual political trust and in-depth integration of interests in cooperation. Together, these traits help to foster a relationship that advances both nations’ interests and is mutually supportive.

As for the “breadth” of China-Singapore relations, Ambassador Sun described this as “cooperation in any domain you can think of”. Such cooperation extends beyond government to the daily lives of the people of both nations. For instance, landmark buildings of Singapore’s CapitaLand Group and outlets of Yakun Kaya Toast, widely known as “Singapore’s national breakfast”, are found in many Chinese cities. Likewise, Chinese brands and popular Chinese drama series are increasingly well-liked in Singapore.

The shared philosophy of both nations to improve people’s lives

Ambassador Sun spoke of the shared, ingrained philosophy of both nations to improve the people’s lives as “solidity” (厚度). She also called the historical and cultural ties between the two nations “richness”. While the two countries are evidently individual countries, as seen from their interactions with each other, historical and cultural ties make Singapore-China relations unique from other bilateral relations.

The final dimension of Singapore-China relations is “warmth”, as demonstrated by the five million annual visits between the people of Singapore and China before Covid-19.

The final dimension of Singapore-China relations is “warmth”, as demonstrated by the five million annual visits between the people of Singapore and China before Covid-19. Although the visits have sharply declined due to the pandemic, both nations’ leaders and ministers have kept in close touch, and the business community and people have a strong desire to resume contact as soon as possible.

Considering the milieu of the past to the present, Ambassador Sun spoke of many unprecedented “changes” on the horizon, including global challenges brought about by external forces urging nations to take sides, as well as economic decoupling and the disruption of supply chains.

In her view, the US cannot accept the fact that China and other emerging nations have an equal right to development. Thus, the US has continued to make attacks on China by imposing economic sanctions, implementing scientific and technological decoupling, launching ideological attacks, and initiating military provocations. These acts are serious threats to the peaceful development of China and the region, and are causing greater turbulence in today’s unstable and uncertain world. In recent years, the US has gravely challenged the “one China” principle and China’s sovereignty, as well as threatened regional peace and stability. Ambassador Sun urged nations in the region to respond resolutely and forcefully with one voice.

... China and Singapore should actively build a future-oriented community for development and establish a model for joint development, so as to further align development strategies and integrate the interests of both nations.

Many ‘constants’ in Singapore-China relations

In the current environment, Ambassador Sun is heartened by the many “constants” in Singapore-China relations. She believes that the political will of both nations’ leaders to resolutely lead the way in moving bilateral relations “onwards and upwards” (向上向前), as well as the sincerity and enthusiasm of the people to deepen friendship and understanding, have remained unchanged.

In her view, China and Singapore should actively build a future-oriented community for development and establish a model for joint development, so as to further align development strategies and integrate the interests of both nations. Such efforts would accelerate cooperation in emerging fields that would lead to high-quality regional development, set benchmarks for interconnectivity and expand high-quality cooperation in the Belt and Road Initiative.

Ambassador Sun also mentioned the New International Land-Sea Trade Corridor under the China-Singapore (Chongqing) Demonstration Initiative on Strategic Connectivity, the third China-Singapore bilateral project. She described it as “a very typical demonstration project between China and Singapore that serves as a dual-axis driver for regional development”, with one axis each in China and Singapore to propel development in the entire region. She added that connectivity projects would be even more important as the world demands strengthened resilience in supply chains.

As for the “hot regional issues that have recently emerged”, she believes that China and Singapore should strengthen communication and coordination and be firm partners in jointly opposing forces and actions that disrupt or undermine regional peace and stability. Together, China and Singapore can firmly uphold the fundamental norms of international relations based on the UN Charter, persevere with genuine multilateralism and open regionalism, and make an “Asian contribution” to global governance by jointly improving the “Asian model” and pooling together “Asian capabilities”.

Ambassador Sun also noted that Prime Minister Lee Hsien Loong specifically addressed China-US relations and the complex and volatile global situation in his National Day Rally speech, expressing concerns for the future. He also emphasised the need to be more far-sighted and to make preparations for the decades ahead.

China’s leaders are ready to work with Singapore’s leaders to scale a higher peak for our future, undaunted by the looming clouds.

She added that over the next 30 to 50 years and beyond, maintaining a global system with the UN at its core and a law-based global order as well as preventing damage to regional peace and stability would require the collective efforts of countries in the region, including China and Singapore, and every country in the world. The determination needed to bring this about calls to mind the political acumen and resolve that the previous leaders of China and Singapore had some 40 years ago to decisively pave the way for bilateral cooperation, which laid the foundation of mutual trust and established the bilateral cooperation framework.

“We are now at another similar juncture once again. China’s leaders are ready to work with Singapore’s leaders to scale a higher peak for our future, undaunted by the looming clouds. Together, we can make strategic choices that are beneficial to the long-term development of China-Singapore relations and to regional and global peace and stability, so as to ensure lasting peace and prosperity for our two nations and the people in the region”, she said.