Micro, small, and medium enterprises assets account for 77% of the total assets of Chinese enterprises, while their annual revenue contributes 68% of the total amount of annual revenue of Chinese enterprises. Chen Jing, Lianhe Zaobao’s Shanghai correspondent reports that as the coronavirus outbreak in China eases off, SMEs in China are doing their level best to get their businesses up and running again. But the way forward looks to be all uphill. 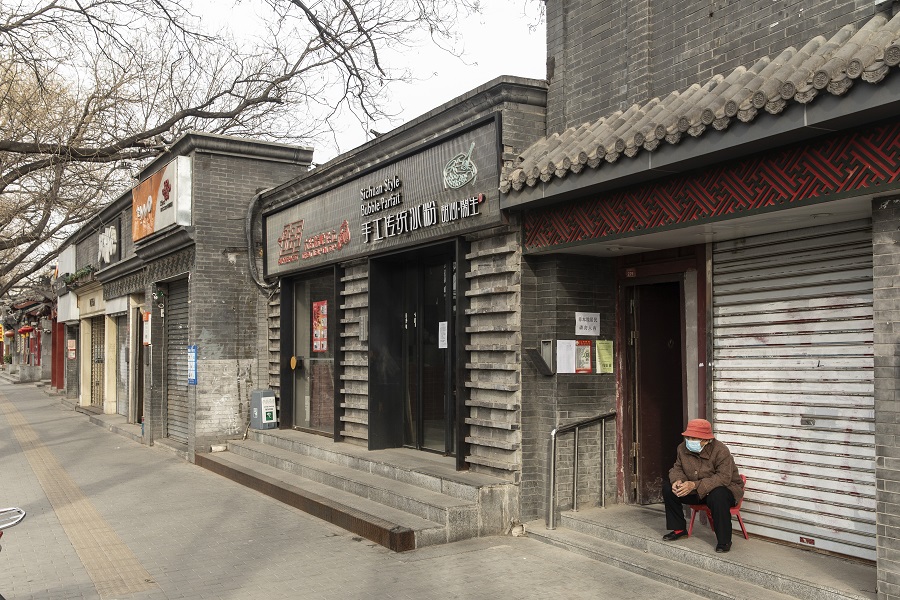 An elderly person wearing a protective masks sits in front of shuttered stores near a hutong neighborhood in Beijing, China, on 18 March 2020. (Qilai Shen/Bloomberg)

Grace Chong - 23 September 2022
While Chinese President Xi Jinping is likely to secure a third term at the 20th Party Congress, Loro Horta recalls the saying that one should “be careful what you wish for”. The road ahead in his third term looks to be fraught with challenges, both domestically and externally. This is the first in a series of four articles on President Xi Jinping and the road ahead.
Read more
Translated by Grace Chong on 23 March 2020

A huge drop in revenue, staff in quarantine, a tight cash flow… Huang Liyun, the owner of two nail salons in Shanghai shopping malls, is facing her biggest business crisis yet in 13 years. To prevent her finances from depleting any further, Huang had earlier made the difficult decision to close one of her two nail salons.

When she reopened her remaining shop recently, customers were few and she saw a 60% drop in revenue. “Last week, shoppers have finally returned but due to an increase in imported cases [of Covid-19], everyone stops going out again,” she laments.

Only five out of her 13 staff have returned to work. The rest are still in their hometowns or have been placed under quarantine upon returning to Shanghai. This means that Huang not only has to arrange temporary accommodation for her staff in quarantine, she also has to continue contributing to their social security fees and pay for her shop’s rental. Overwhelmed, she says, “It’s difficult to even maintain operations of the salons now, let alone make money.”

To business owners of small and medium enterprises (SMEs) like Huang, the sudden outbreak is enough to put them out of business. They lack resources for epidemic prevention and do not have enough staff to put on rotation. Many enterprises could not even hold out until the day they were allowed to resume operations.

According to a report released by the China Association of Small and Medium Enterprises at the end of last month, close to 90% of SMEs do not have a three-month buffer in their business accounts. Due to cash flow difficulties, roughly half of the enterprises interviewed have already considered retrenchment.

However, Chen Yaomin, owner of a services management company in Qingdao, Shandong, has no plans to retrench his workers. “If you retrench people now, you have to hire people again when the outbreak is over. Worse still, you wouldn’t know where the newly hired employees have travelled to or how their health conditions are. Such unknowns pose a much greater risk,” he tells Lianhe Zaobao.

Chen’s company provides backend management services like catering and cleaning to various large enterprises. Although most of his clients have resumed operations, their working hours have greatly reduced, which in turn limits the company’s revenue. For the time being, Chen and his employees have reached an agreement to have Chen pay 70% of their salary first. Their arrears would be paid when the business is fully restored. “The employees understand that it is important to tide over this difficult period first. Otherwise, if the company shuts down, they will all be put out of a job,” he explains.

However, this important force in China’s national economy is currently not only fighting for its survival, but also finding it extremely difficult to resume operations. According to combined statistics from the National Development and Reform Commission of the People's Republic of China and the Ministry of Industry and Information Technology, at present, large-scale industrial enterprises outside Hubei have achieved a work resumption rate of over 90%, but SMEs have only achieved a 60% work resumption rate.

According to a report from the China Association for Labour Studies of over 200 micro, small, and medium enterprises, the majority of enterprises interviewed chose to resume operations in March or after March, which is close to 20 days later than large enterprises. Of the enterprises that have resumed operations, close to 40% of them believe that a period of four months is needed to restore full capacity, while approximately 25% predict that half a year is needed to achieve full capacity.

Vice-Minister of Industry and Information Technology Xin Guobin pointed out that SMEs have a weaker anti-risk capability and thus find it more challenging to resume work and production. Disruptions in logistical processes and staff mobility, difficulties in cash flow, and resumption of work at enterprises upstream and downstream of production hinder the SMEs’ resumption of work.

These obstructions to the SMEs further exacerbate the downward trend in China’s economy. Economic figures hit a record low in the first two months of 2020.

"The most important thing now is to hold out until the outbreak is over. As long as the company does not die, there’s still a chance,” -  Chen Yaomin, owner of a services management company in Qingdao, Shandong.

On 19 March, the Ministry of Industry and Information Technology released guidelines for supporting SMEs in their efforts to resume work amid the pandemic. Measures announced include various supporting policies such as making 500 billion RMB (roughly S$102 billion) of additional funds available for commercial lenders to lend to SMEs, reducing the value-added tax of small enterprises from March to May, and encouraging business owners to lower the rental charges of SMEs.

Apart from credit and tax support, various cities and regions have also launched flexible policies to reduce the requirements needed for SMEs to resume work. Last week, Shanghai allowed enterprises other than those running special events like tour groups and theatre performances to resume work without putting it on record. Chengdu has also allowed shop owners to operate outdoors to alleviate the consumers’ worries of poor ventilation indoors. Qingdao’s Chengyang District has also bought work resumption insurance for its enterprises, covering the losses incurred following their resumption of work amid the outbreak.

However, Chen believes in self-reliance rather than waiting for the government to roll out supporting policies. Besides cutting his employees’ salaries temporarily, he successfully negotiated with upstream suppliers to postpone the deadline for payment until the company’s business has been fully restored.

“In this special period, our goal is to break even, or even to not incur too much losses. The most important thing now is to hold out until the outbreak is over. As long as the company does not die, there’s still a chance,” he says.

According to an International Monetary Fund blog post published on 20 March, China’s slowdown in the first quarter of 2020 will be significant and will leave a deep mark for the year. The severity of the coronavirus is thought to be even greater compared to the Great Financial Crisis in 2007–08, as it hit various aspects of society all at the same time. While the outbreak in China is subsiding and industries are returning to work, the ongoing pandemic is creating economic risks as more countries face outbreaks. In light of this, consumers and firms may remain wary, which in turn will depress global demand for Chinese goods just as the economy is returning to work.

According to a Bloomberg article published on 22 March, People’s Bank of China Deputy Governor Chen Yulu told reporters in Beijing: “Economic indicators will likely show significant improvement in the second quarter and the Chinese economy will return to potential output level rather swiftly.” According to Chen, the Chinese currency will also continue to stay at around 7 per US dollar with movement on either side of that level. He said that while the virus’ impact on supplies and inflation is likely to continue for a while, price hikes will start to moderate as the economy resumes, and inflation growth will slow from the second quarter and continue that way in the rest of the year.