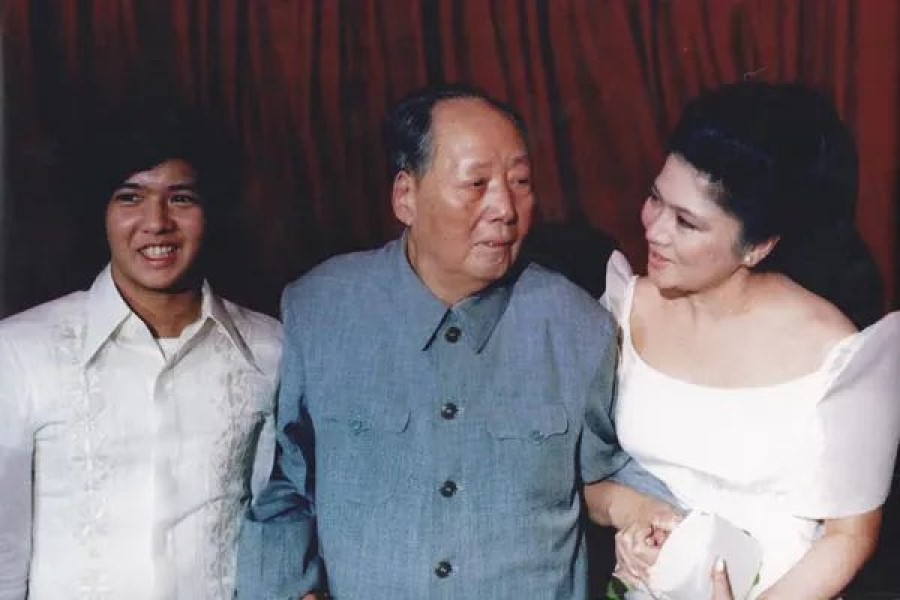 Ferdinand Marcos Jr (left) with Mao Zedong (centre) and Imelda Marcos, on a visit to China in September 1957. (Twitter)

Candice Chan - 30 January 2023
A mall in Shenzhen came under fire for putting up white lanterns with black text as part of its Chinese New Year decorations, while an “ugly” rabbit-shaped light decoration was removed from another mall in Chongqing. Academic Zhang Tiankan muses on tradition and innovation, and the evolution of traditional decorations.
Read more
Translated by Candice Chan on 13 May 2022

Marcos Sr was corrupt and decadent, and clamped down brutally on his political detractors. After he went into exile in Hawaii in 1986, the elected Philippines government estimated that the Marcos family and their employees embezzled as much as US$5 to 10 billion from the national coffers; nevertheless, Marcos Jr still managed to get elected with a strong majority of votes. To outsiders — and some Filipino voters — this collective amnesia or “forgiveness” by the Filipinos is hard to believe.

Following Bongbong’s emphatic win, a video clip of the family visiting China in the 1970s began circulating on social media.

It was September 1974. Then President Marcos Sr sent his wife Imelda Marcos (an admirer of Mao Zedong) to China, where she met Mao, who by then was 81, weak and ill. When they met, Imelda put Mao’s hand to her cheek. Surprisingly, Mao put Imelda’s hand to his lip and lightly kissed it in a classic Western gesture.

After Mao kissed Imelda’s hand, Marcos Jr also excitedly went up to Mao and kissed his cheeks. Forty-eight years later, that youth is now about to govern the Philippines...

The scene was captured by photographers, and became what the Chinese media described as “the number one kiss in the world” and “the only photograph of Mao Zedong kissing a woman”.

People focused on the interaction between Mao and Imelda; few noticed young Marcos Jr, at his mother’s side, exuding an aristocratic air. After Mao kissed Imelda’s hand, Marcos Jr also excitedly went up to Mao and kissed his cheeks.

Forty-eight years later, that youth is now about to govern the Philippines, as probably the only world leader who has kissed Mao Zedong.

Does any warmth still linger from that kiss? Will Marcos Jr continue with incumbent President Rodrigo Duterte’s pro-China policy?

This is the latest puzzle for analysts, and opinions differ.

Some Chinese academics feel that given Imelda’s close ties with the Chinese leaders, Marcos Jr would have a better impression of China; many conclude that he will move closer to China and further from the US, based on his current situation.

Marcos Jr’s victory came on the back of Duterte’s support. It is common knowledge that Duterte did not have good relations with the US. On a visit to China soon after taking office in 2016, Duterte said the US has “lost”, and declared “separation” from the US in terms of the military and economy, adding the Philippines will join China and Russia “against the world”. Over six years in office, Duterte has said no to visiting the US. Many analysts feel Marcos Jr’s diplomatic direction will be an extension of this.

More importantly, Marcos Jr and Imelda were both found guilty of contempt of court in 2011 by a judge in Hawaii and fined US$353 million, in connection with a human rights class suit against Marcos Sr in 1992. For the past 15 years, Marcos Jr has evaded the judgement and has not set foot in the US.

Following his election win, local media in the Philippines repeatedly asked if Marcos Jr would be able to visit the US given the above. His spokesperson ignored the question.

Marcos Jr’s victory is indeed a headache for the US. However, it is overthinking it to surmise that Marcos Jr will become an “abandoned child” of the West.

The Philippines is a treaty ally of the US which hosts five US military bases. It is inconceivable for two consecutive Philippines presidents not to visit the US. Maybe this is why some Philippine academics think that Marcos Jr could become the “abandoned child” of the West and lean towards China instead.

The US is quick to mend fences

Marcos Jr’s victory is indeed a headache for the US. However, it is overthinking it to surmise that Marcos Jr will become an “abandoned child” of the West.

On 11 May, National Security Council Indo-Pacific coordinator Kurt Campbell dispelled such notions and extended an olive branch to Marcos Jr.

Speaking at the US Institute of Peace, Campbell said that the US seeks “early engagement” with the Marcos Jr administration. He acknowledged that “historical considerations” may cause some challenges initially, but because the Philippines “plays such a critical important role”, the US “will seek to continue close partnership in the security realm and increasing trade and economic ties”. Campbell also added that US relations with outgoing Philippine President Rodrigo Duterte “really rebounded” toward the end of his term.

Campbell was referring to the fact that Duterte had fully restored the Visiting Forces Agreement with the US last July, authorising the movement of US troops in and out of the Philippines for war drills and exercises once again.

In a rare move during a televised debate in January, Marcos Jr, who has never brandished a clear manifesto, expounded on a rather clear foreign policy approach.

At the time, he stated, “No matter what the superpowers are trying to do, we have to work within the interest of the Philippines. We cannot allow ourselves to be part of the foreign policy of other countries.” While he stayed neutral on the Permanent Court of Arbitration’s ruling on the South China Sea, he asserted that his country “will not cede any one square inch to any country”. He also argued that the US-Philippine alliance “has stood us in good stead for over a hundred years and that will never disappear from the Philippine psyche”. At the same time, he would prioritise the bilateral relationship with China.

... China and the US both strive to win over the ASEAN countries, Marcos Jr has a good chance of having the best of both worlds.

Perhaps after analysing Marcos Jr’s remarks, the higher-ups in the US made up their minds to extend him some goodwill.

At the end of the day, although his father has called him “lazy” and he did not complete his degree at the University of Oxford, Marcos Jr has received advanced tertiary education. Compared to his predecessor, he is more likely to take a balanced route between China and the US. As China and the US both strive to win over the ASEAN countries, Marcos Jr has a good chance of having the best of both worlds.

To resolve the question of how Marcos Jr will visit the US in the future, the US can simply grant him diplomatic immunity as a “big gift”. Alas, the US’s Joe Biden administration has practised values-based diplomacy and defines its competition with China — whether intentionally or unintentionally — as a battle between democracy and authoritarianism. If it turns a blind eye to the Marcos family’s human rights case because of its Indo-Pacific strategy, the contradictions in the US’s values-based diplomacy and the country’s inability to walk its talk will be plain to see.

Related: 2022 elections may bring change to the Philippines' China policy | Can the next Philippine president stand up to Chinese pressure in the South China Sea? | The Belt and Road Initiative and the Philippines’ post-Duterte China challenge | Mind the gaps, fill the needs: A strategic outlook for the Philippine-US alliance | Philippine-US cooperation on Whitsun Reef: A 'win' for the Biden team in Southeast Asia? | Visiting Forces Agreement: Uncle Sam still welcome for another year in the Philippines