Philippine-US cooperation on Whitsun Reef: A 'win' for the Biden team in Southeast Asia?

Southeast Asian views of the US declined during the Trump administration, and persisted into the Biden administration early on in the year. But Washington’s sustained support for Manila amid the latter’s recent confrontation with China in the South China Sea has helped to offset negative perceptions of Uncle Sam in the region. 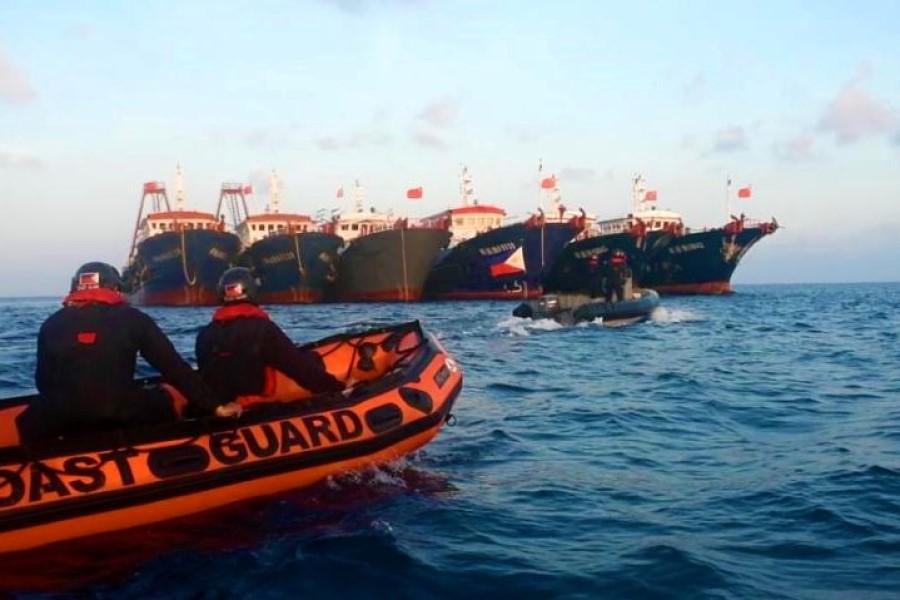 Candice Chan - 25 January 2023
While the Americans have made noticeable progress in their “pivot” to Asia, the crux of successful regional engagement rests on Washington’s ability to work with and around China’s indisputable links and influence in this part of the world, while managing its own relationship with Beijing.
Read more
Translated by Candice Chan on 27 May 2021

Southeast Asian views of the US as a positive force in the region declined during the Donald Trump administration. They remained questionable at the outset of the Joseph Biden presidency. Some months on, however, two developments are helping to offset such negative perceptions.

The first summit of Biden and his Quad counterparts in March affirmed that the group would deliver up to one billion vaccine doses to ASEAN (Association of Southeast Asian Nations), the Indo-Pacific and beyond by the end of 2022. Though obviously subject to changing circumstances like India’s acute need for vaccines, the Quad initiative — and other working groups to work on deliverables such as climate change and critical and emerging technologies — helped to offset the negative depiction by China and some in Southeast Asia of the US as being disruptive in Southeast Asia and the Quad as ineffective and ephemeral.

More strikingly, the Biden government also seemed on target in reaffirming the longstanding alliance with the Philippines. Beginning in March 2021, top Biden national security officials worked effectively with their Philippine counterparts — and in conjunction with supporting US-Philippines military exercises — to counter China’s coercive attempt to occupy the Philippines-claimed Whitsun Reef.

Highlighting China’s strong-arm tactics, which starkly belied Beijing’s self-proclaimed image as a regional “stabiliser,” Philippines-US criticism saw senior Philippine leaders attack China‘s practices in the South China Sea in harsh language unprecedented in the years of President Rodrigo Duterte. Known for his negative views of the US and positive views of China, Duterte did not join the barrage of criticism. Yet he did not attempt to stop it, until he issued an order in mid-May for his cabinet to avoid public comments on China and the South China Sea.

Over two hundred ships, purportedly from the People’s Armed Forces Maritime Militia (PAFMM), occupied the disputed territory in early March. The reef is within the Philippines’ Exclusive Economic Zone and is also claimed by Vietnam. China’s expansive South China Sea entitlement was deemed illegal by a United Nations Law of the Sea Tribunal in 2016. The Chinese ship presence was first reported by the Philippine government on 20 March. The foreign ministry protested, the defence minister condemned the presence and Philippine Navy and Coast Guard forces were dispatched to the area. Even Duterte reportedly asserted the Philippines' position in a meeting with the Chinese ambassador on 25 March.

Chinese diplomats said the territory belonged to China and that the Chinese vessels were fishing boats seeking shelter, not maritime militia. A growing body of evidence suggests otherwise. Research by Andrew Erickson and Ryan Martinson has shown conclusively that a number of PAFMM vessels were deployed at Whitsun Reef. And research by Zachary Haver showed Chinese authorities supply all fishing vessels in the South China Sea with surveillance equipment as the “first line in defending China’s maritime rights and interests.”

The US Embassy promptly backed the Philippines’ criticisms. In late March, US National Security Adviser Jake Sullivan followed up with a phone conversation with his Philippine counterpart, emphasising US support and the applicability of the US-Philippines Mutual Defense Treaty to the area. Japan, Australia, Great Britain, Canada and the European Union also sided with the Philippines.

In early April, 44 Chinese vessels were at the reef. The Philippine defence minister warned strongly that Chinese militia vessels sought to occupy other disputed areas. In unusually sharp language by officials in President Duterte’s presidential office, his legal counsel and the presidential spokesman added to the criticism, and the foreign ministry initiated daily protests.

Foreign reports in mid-April said only “a handful” of Chinese vessels remained at Whitsun Reef, which seemingly ended the standoff then. President Duterte’s first public remarks on the controversy came in a briefing on 19 April, arguing against the Philippines’ confrontation with China.

... it can be said that the Biden Administration’s steady and effective handling of the troubled bilateral relationship with a longstanding ally should be credited as a “win” in Washington’s bid to win friends and influence people in the region.

Nevertheless, the Duterte government’s public opposition to China’s affronts followed, on an unprecedented scale. On 24 April, Philippine Coast Guard and related security forces began conducting prolonged widely publicised exercises in the disputed waters, prompting a Chinese complaint. The Philippines’ defence and foreign ministers strongly rejected China’s opposition. Mr Locsin, the country’s chief diplomat, used rather undiplomatic and coarse language in demanding that China withdraw its ships. The firm Philippine government resolve presumably was reinforced by the annual US-Philippines Balikatan exercises held for two weeks in mid-April. Exercise Balikatan was the latest in a series of repeated US naval shows of force, with a US carrier strike group carrying out exercises in the disputed waters.

China’s next moves in the controversy remain unclear amid Duterte’s continued ambivalence. The mercurial president continues to see China as “a good friend” while periodically affirming a strong resolve to protect Manila’s territorial claims. The Biden government working closely with senior Philippine leaders appearing at cross purposes with Dueterte adds to the ambiguity. This is likely to characterise Philippines-China-US relations in the last year of Duterte’s term. For now, however, it can be said that the Biden Administration’s steady and effective handling of the troubled bilateral relationship with a longstanding ally should be credited as a “win” in Washington’s bid to win friends and influence people in the region.

This article was first published by ISEAS – Yusof Ishak Institute as a Fulcrum Commentary.