The Fujian, China’s third aircraft carrier, was launched on 17 June. The highlight is the electromagnetic catapult system for launching aircraft, which could put it on par with much of the US’s cutting-edge technology in the field. Zaobao correspondent Yu Zeyuan takes a closer look at the implications of this development. 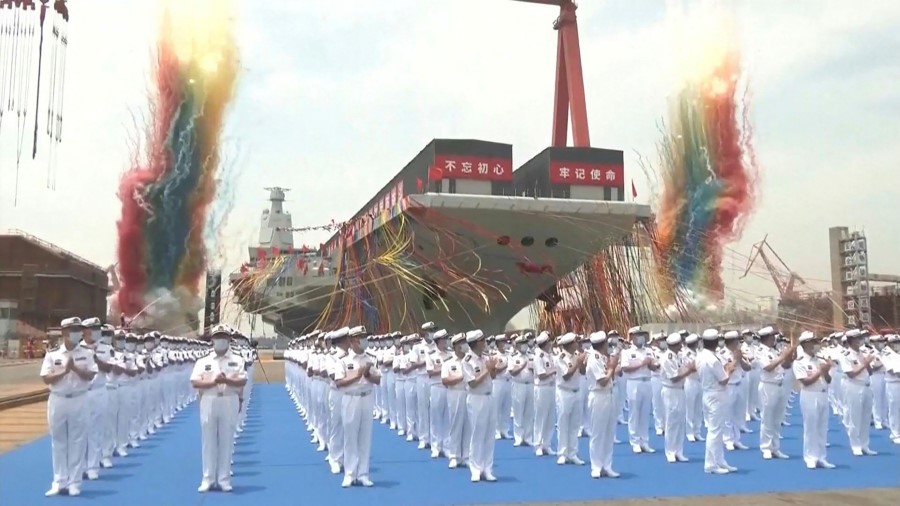 This screen grab made from video released by Chinese state broadcaster CCTV shows the launch ceremony of the Fujian, a People's Liberation Army (PLA) aircraft carrier, at a shipyard in Shanghai on 17 June 2022. (CCTV/AFP)

Candice Chan - 19 January 2023
The latest announcement of China’s first population drop in six decades has gained much attention, with concerns over the long-term implications for the economy and the community. How will this affect China’s GDP and its aim to overtake the US as the world’s biggest economy? Can China reverse the population trend?
Read more
Translated by Candice Chan on 20 June 2022

China’s third aircraft carrier named “Fujian” was unveiled on 17 June to much fanfare. For China’s military fans who cheered the launch, this signals that China’s aircraft carrier manufacturing technology is second in the world, and the country is starting to match the US as the number one in aircraft carriers.

The previous two aircraft carriers — the Liaoning and Shandong — addressed China’s earlier military needs, and played a role in developing the country’s aircraft carrier manufacturing technology and training and combat management capabilities. However, the Liaoning and Shandong cannot match the Nimitz and Ford class carriers of the US in terms of tonnage, propulsion and launching efficiency.

But the highlight of the Fujian is not so much its tonnage, but the use of an electromagnetic catapult system for launching aircraft, a mark of advanced technology on new-generation aircraft carriers. Of the 11 US aircraft carriers in service, only the new Gerald R. Ford uses an electromagnetic launch system, with the other ten Nimitz class vessels using a steam launch system.

The advantages of the electromagnetic launch system over the steam system are clear, such as digital management and monitoring, adjustable launch strength to suit different aircraft, as well as being lighter and more compact and easier to maintain.

While the US considers aircraft carriers with electromagnetic catapult systems to be new-generation aircraft carriers, the Gerald R. Ford’s medium-voltage direct current (MVDC) integrated power system is still imperfect. In theory, it fails only once every 4,100 times, but in practice, it fails approximately once every 400 times. Due to the high failure rate, the Gerald R. Ford has yet to be deployed despite being in service for several years.

The technical prowess of the Fujian is expected to surpass that of the Gerald R. Ford. With an integrated power system developed by leading Chinese naval engineer Ma Weiming, the Fujian’s MVDC integrated power system is capable of the more stable direct DC output. Not only are complex transformer/rectifier systems no longer needed, its energy conversion efficiency rate should theoretically reach over 90%, raising its efficiency to 60% over that of the Gerald R. Ford’s MVDC system.

Online news reports claim that the Fujian’s electromagnetic catapults have been tested tens of thousands of times on land with an extremely low failure rate. If the results of these pilot tests can be sustained and the Fujian can launch anything from large airborne early warning (AEW) aircraft to small drones, its overall combat capabilities will far exceed that of the Liaoning and Shandong.

Based on a video of the launch ceremony of the Fujian released by Chinese state media, the aircraft carrier’s three catapults are still kept under wraps in environmental shelters. State media reports said that the aircraft carrier is set to undergo mooring tests and sea trials next, which means the outfitting work will be done soon.

China has to overcome the nuclear power hurdle if it wants to catch up with and overtake the US in terms of aircraft carrier technology.

Related: China’s expanding its naval power, and it’s not afraid to show it | What does the high-profile launch of three new PLA warships tell us? | China displays its new weapons amid cross-strait tension