China’s expanding its naval power, and it’s not afraid to show it

Recent signs point to China’s third aircraft carrier being ready to launch very soon, with more advanced technology such as an electromagnetic catapult launch system. Amid growing international pressure, China cannot afford to slacken in terms of defence, and its latest moves to beef up its navy are an effort to show that it is taking defence seriously. Zaobao correspondent Yu Zeyuan breaks down what we can expect from China’s growing naval power. 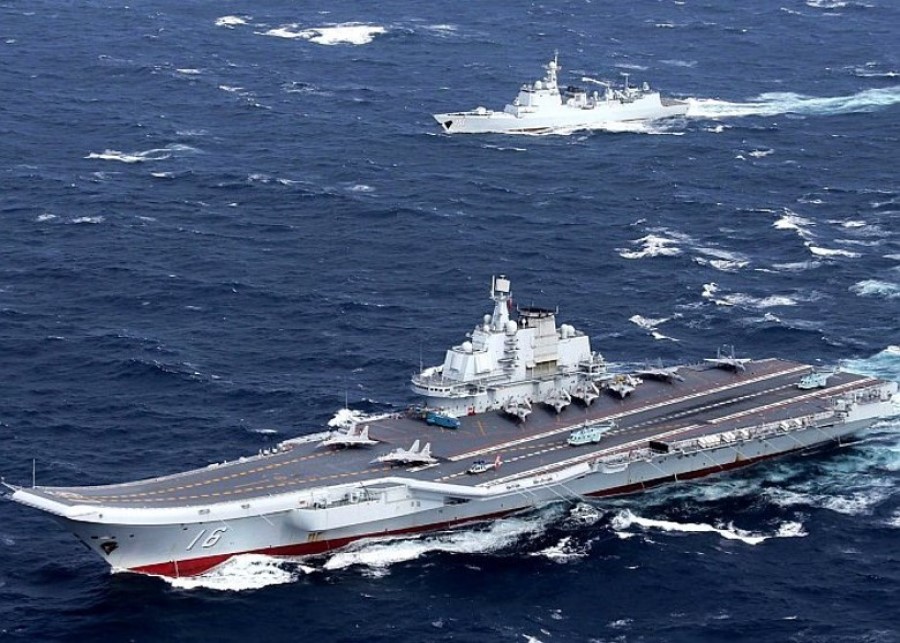 The Liaoning at sea. (Internet)

Candice Chan - 29 June 2022
Hong Kong’s incoming Chief Executive John Lee has nominated the next batch of senior officials, who have been duly appointed by China’s State Council. Many “new Hong Kongers” are gradually making their way into politics through various channels, facilitated by the central government in Beijing, who are not satisfied with the pro-establishment camp in Hong Kong. But can these new Hong Kongers show that they have the interests of all Hong Kongers at heart?
Read more
Translated by Candice Chan on 28 April 2022

The closing scene of the video shows a pan shot across two photos of the flight decks of China’s aircraft carriers, the Liaoning and Shandong, with the camera stopping at an empty space next to them, while a navy officer receives a phone call from his mother and says, “What? A third baby? I’ll make arrangements.”

This is a clear signal that the Type 003 carrier — currently under construction in Shanghai — will soon be launched. Many fans of the military in China even looked forward to a launch on Navy Day on 23 April, but the authorities did not release any information about it on the day.

It is easy to understand why the Type 003 carrier was not launched as anticipated. In the past few weeks, Shanghai has seen tens of thousands of Covid-19 infections, including asymptomatic cases. Even if the new aircraft carrier is ready for launch, it would be inappropriate to hold a grand ceremony during a severe epidemic situation. Furthermore, launch preparations would have been affected given that the grim Covid-19 situation has persisted in Shanghai for over a month.

As the second China-built carrier, Type 003 has been under construction in dry dock for over four years. Going by the construction timeline for China’s first locally made carrier Shandong of four years in dry dock before its launch, the construction of the Type 003 carrier should be near completion, and could be launched on PLA Day on 1 August, or China’s National Day on 1 October. When the Type 003 carrier is launched, China will also form its third aircraft carrier crew.

Based on public information, the Type 003 carrier will be significantly different from China’s previous two carriers. The new carrier is about 326 metres in length, with a beam of 79 metres and displacement of nearly 90,000 tonnes, far more than the Shandong’s 75,000 tonnes.

The Type 003 carrier does away with a ski-jump takeoff ramp, and uses a US-style catapult launch system on deck, which allows an aircraft to be launched fully armed and fuelled without having to consider wind direction. The new system greatly increases launch efficiency, making it clearly superior to the ski-jump takeoff ramp.

There are two types of catapult launch systems — the traditional steam-powered catapult, and the more advanced electromagnetic (EM) system. In recent years, China has made some key breakthroughs in EM catapult technology, and even held a “competition” between EM and steam catapults, which the former won soundly.

So, the Type 003 carrier will most likely forgo the first-generation steam catapult systems used on the US Nimitz-class carriers, and instead, use the EM catapult launch system similar to those found on US Gerald R. Ford-class carriers.

China is still lagging behind the US in terms of the design, construction and use of aircraft carriers.

As for the propulsion system on the Type 003 carrier, Chinese military academics have different theories. Some believe that it will be nuclear -powered, but more are inclined to think it uses conventional mechanical power.

While it will be very difficult for mechanical power to drive the huge body of the Type 003 carrier, as well as the EM catapult launch system, military academics have said that these issues can be resolved as the Type 003 uses the second-generation electric integrated power system developed by PLA researcher Ma Weiming and his team.

In terms of capacity, using the EM catapult launch system, the Type 003 aircraft carrier can carry J-15 fighter jets — like both the Liaoning and Shandong carriers — as well as KJ-600 early warning aircraft. This would greatly strengthen the combat effectiveness and self-defence capabilities of the carrier. The China-built J-35 stealth fighter could also make an appearance on the Type 003 aircraft carrier in the future.

China still a few steps behind

Apart from the Type 003 aircraft carrier, Chinese state media recently announced the commissioning of the Type 075 amphibious assault ship Guangxi and the Type 055 large destroyers Anshan and Wuxi, and their recent training exercises.

Following the debut of Anshan and Wuxi, the Chinese navy now has five Type 055 large destroyers in service, along with three other vessels that would be launched or commissioned in the near future. With a displacement of over 10,000 tonnes, the Type 055 large destroyers are mainly used for air defence, anti-ship and anti-submarine formations, and provide a reliable shield for the Chinese navy’s aircraft carrier battle group.

With the Russia-Ukraine war revealing Russia’s military weaknesses, China is further prompted to accelerate the upgrade of its own military power.

The Chinese navy recently released a video showing the firing of a “mysterious missile” from a Type 055 large destroyer, attracting foreign media attention. The US Navy reported on 20 April that this mysterious missile could be the long-speculated hypersonic YJ-21 anti-ship ballistic missile. With an estimated range of 1,000 km to 1,500 km and a terminal velocity of up to Mach 10, this missile poses a significant threat to the large ships of the US and its allies.

In recent years, China has been facing increasing international pressure. With the Russia-Ukraine war revealing Russia’s military weaknesses, China is further prompted to accelerate the upgrade of its own military power. While Chinese officials did not intentionally sensationalise the news, the PLA will not ease up on its war preparations for even a moment. It is expected that the debut of the Type 003 aircraft carrier and other more advanced equipment are just around the corner.

Related: China displays its new weapons amid cross-strait tensions | With American aircraft carriers paralysed, China's Liaoning leads drills around Taiwan | What does the high-profile launch of three new PLA warships tell us? | Will the Taiwan Strait issue be internationalised under Biden?