The PLA Navy recently launched three heavy-duty battle warships — the Hainan, the Dalian and the Changzheng 18 — all in one go, prompting suggestions that the Chinese are now more confident about their strategic defence capabilities. Yu Zeyuan has the details. 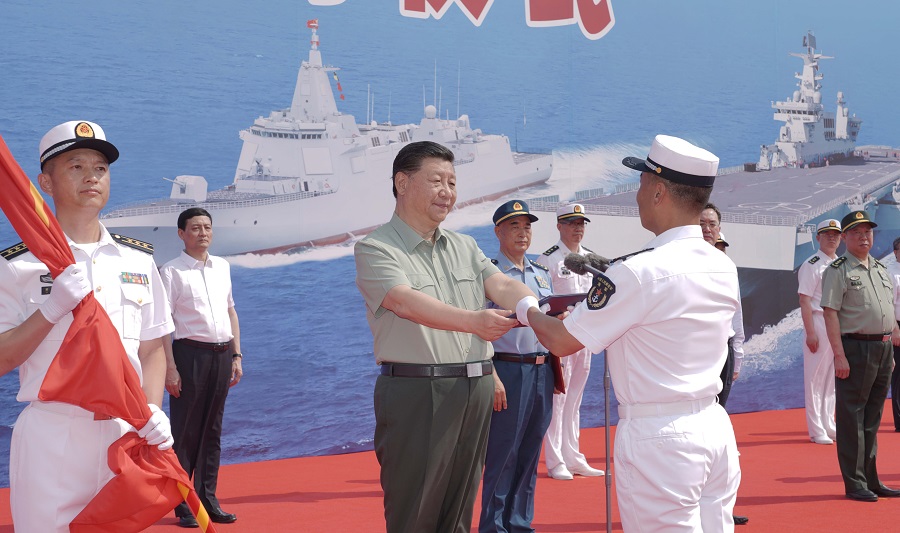 Grace Chong - 11 January 2022
Chen I-hsin asserts that the US is no longer in a position to facilitate cross-strait talks, given that China’s national strength has increased considerably and the US is no longer seen as a neutral arbiter. Moreover, the “two states” theory which Taiwan’s ruling party seems to support leaves little room for dialogue, rendering any pressure from the US futile.
Read more
Translated by Grace Chong on 26 April 2021

In recent years, the People’s Liberation Army (PLA) Navy has been launching new warships as quickly as “dropping dumplings into soup broth” (下饺子) in a move that surprised many observers.

For several years running, China has been a world leader in terms of the tonnage of ships it puts to sea; the total displacement of the three newly commissioned warships amounts to over 60,000 tons, while the combined tonnage of the warships commissioned by Japan, the US, and France in 2020 was not even 30,000 tons.

... it is rare for the detailed specifications of the three warships to be revealed to such a great extent.

Massive tonnage aside, it is rare for the detailed specifications of the three warships to be revealed to such a great extent. Chinese President Xi Jinping even personally attended the commissioning ceremony for the warships, presenting their captains with a PLA flag. Unlike the past practice of keeping such news under wraps, state media broadcasts showed aerial footage of the Sanya naval port, revealing the configuration of the flight deck and docking bay of the new amphibious assault ship, and even the deck layout of the new nuclear-powered strategic ballistic missile submarine.

The Hainan is able to transport nearly 30 helicopters and has a massive through-deck with seven take-off points that can dispatch six shipborne helicopters simultaneously, strengthening the vertical landing and aerospace firepower attacking capabilities of carrier-based helicopters. Its dock is able to accommodate multiple air-cushioned landing crafts and dozens of amphibious infantry combat vehicles. It can quickly dispatch heavy equipment such as main battle tanks, self-propelled artillery, and wheeled tanks onto the beach, enhancing beach-landing combat capabilities.

As a new qualitative force in China’s amphibious warfare, the Hainan would certainly strengthen China’s combat readiness against Taiwan.

Interestingly, on 24 April, the military channel of state media CCTV interviewed a navy official from the Hainan named “Wu Tong”. Some mainland Chinese military fanatics believe that this is not a coincidence but a sign that the mainland is determined to achieve a reunification with Taiwan by force. (NB: The official’s name Wu Tong (吴桐) sounds similar to “reunification by force” (武统 wutong).)

The Dalian is the PLA Navy’s third Type 055 destroyer to be in service following the Nanchang and the Lhasa. Because of its ability not only to serve as an escort for aircraft carriers but to act as a lead ship in a flotilla, it is considered one of the world’s most advanced large destroyers.

At the moment, China has built eight Type 055 destroyers. Apart from the three already in service, the other five have undergone testing and are expected to be in full service within two years.

Of the three vessels that were commissioned on 24 April, number one among them is the Changzheng 18, a Type 094A nuclear-powered strategic ballistic missile submarine. This is also the first time the PLA Navy has announced the name and number of a commissioned submarine. In addition, among the scenes of the Sanya military port captured by CCTV, besides the Changzheng 18, another three Type 094A submarines can be vaguely seen, indicating that these submarines are now China’s main underwater strike force.

Some who follow military developments have noted that the Changzheng 18 features improvements over the Type 094A submarines revealed in 2018. The number of drainage holes at the bottom of the “turtle back” (hull) has been reduced from three rows to two, and the number in the aft (tail) section reduced from two rows to one, showing further improvement in noise reduction.

The fact that the authorities are publicising the Changzheng 18 and other submarines shows that China is more confident about its strategic defence capabilities and dares to take a tougher stance against military pressure from the US and other countries.

However, the Changzheng 18 has a raised “turtle back”, which is clearly lagging behind the water droplet design of the US and Russia in terms of speed and noise reduction.

There has been news that the Type 096 submarines that China is currently developing will do away with the “turtle back” design, but this has not been officially confirmed. But it will be difficult for China’s submarines to catch up with the US and Russia in the short term.

Compared to the US and Russia, submarines have been China’s weak point, which is also one of the reasons why the Chinese authorities have kept its submarine development highly secret. The fact that the authorities are publicising the Changzheng 18 and other submarines shows that China is more confident about its strategic defence capabilities and dares to take a tougher stance against military pressure from the US and other countries.

Most people would feel that aircraft carriers, nuclear-powered submarines, 10,000-ton destroyers, and amphibious assault ships are four categories of heavy equipment for a major naval fleet. China commissioning three out of these four categories of vessels has much to do with the external pressures that China has been facing lately.

Since the Biden administration took office, there has been no sign of improvement in China-US relations. On 19 April, the US Senate and House of Representatives passed the Strategic Competition Act of 2021 that emphasises the US coming together and joining hands with its allies to contain China, making the outlook of China-US relations seem bleaker. Meanwhile, when Japanese Prime Minister Yoshihide Suga visited the US, both sides brought up the issue of Taiwan after some 50 years, putting China on the alert, as the risk of the situation in the Taiwan Strait going out of control continues to grow.

The high-profile announcement by the PLA Navy is a counter to containment by the US, and a signal that it is not slowing down on its objectives due to external pressure. In addition, it is an indication that the first and second island chains that have traditionally restricted it will play a decreasing role.