ISEAS academic Daljit Singh notes that the new great power contest has spilled over into the Indian Ocean, and the term “Indo-Pacific” will better reflect the strategic geography of this central theatre of the 21st century great power struggle. 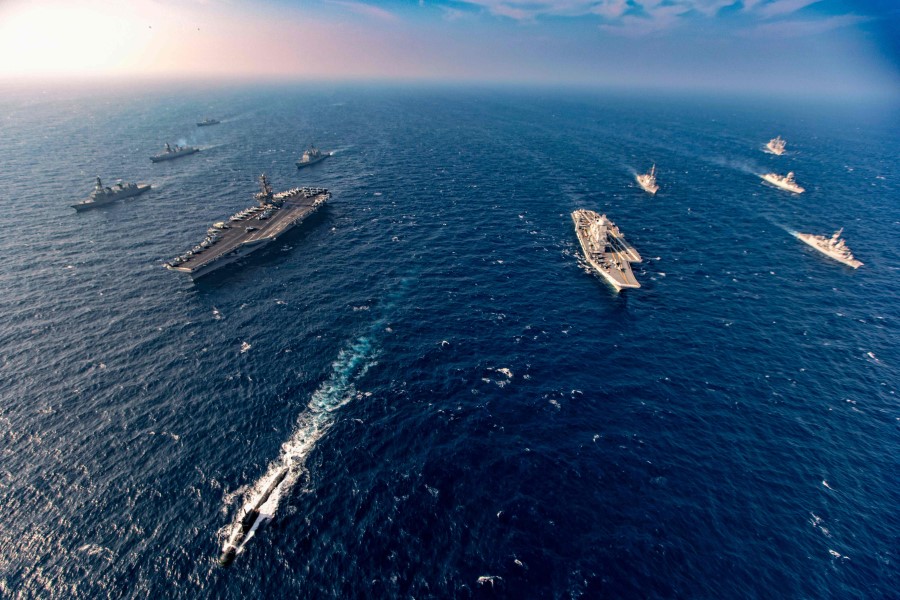 Candice Chan - 10 August 2022
Li Cheng, director of the John L. Thornton China Center of the Brookings Institution, notes that China’s emergence as an economic powerhouse has been accompanied by the rise to prominence of seasoned financial technocrats or self-taught experts. While these "new kids on the block" will most likely enter the new CCP Central Committee this fall for the first time, time will tell how they will respond to the many daunting economic and financial challenges at both the provincial and national levels.
Read more
Translated by Candice Chan on 12 January 2021

Our mental geographies are often shaped by major changes in geopolitical or geo-economic trends often engineered by the agendas and contests of great powers.

In the last decade of the 20th century, with the end of the Cold War, great power competition subsided and the environment became conducive for soft security mechanisms, starting with the ASEAN Regional Forum in 1994 and the East Asia Summit and the ADMM Plus a decade later, all under the rubric of ASEAN centrality. “Asia-Pacific” (East Asia, Australasia and the US) was the language of the geopolitical scope of this ASEAN conception.

The objective was to help secure Southeast Asian autonomy against the currents of international politics by bringing into a cooperative forum the countries of the Asia-Pacific region and especially China and the US. India, although geographically outside the Asia-Pacific, was included. This was done not for the sake of the Indian Ocean or Indian security, but as a potential contributor to East Asian-Western Pacific stability and security.

From Beijing’s perspective, the People’s Liberation Army Navy has to be in the Indian Ocean as a matter of necessity, not choice.

This ASEAN-centred Asia-Pacific architecture has done remarkably well in many ways. However, now in the third decade of the 21st century, the original conditions that founded it have changed. With the rise of China and its perceived challenge to US interests in Asia, great power rivalry has returned with a vengeance. Cooperative and comprehensive security, while still getting polite nods from the great powers, has been overshadowed in their strategies by the urgent needs of traditional military security and geo-economic competition.

The new great power contest is no longer confined to the Asia-Pacific, but is spilling over into the Indian Ocean. The “Indo-Pacific” defines the geography of this central theatre of the 21st century great power struggle — China on one side and the US and its allies and partners on the other — which is destined to stretch from Northeast Asia, through Southeast Asia and Australasia into the Indian Ocean.

China is building a potent navy to keep American naval power as far away as possible from China’s Pacific coast, and to secure China’s energy lifelines from the Indian Ocean which it sees as vulnerable to interdiction by hostile naval forces. From Beijing’s perspective, the People’s Liberation Army Navy has to be in the Indian Ocean as a matter of necessity, not choice. But this brings China inevitably into strategic rivalry with India, driving New Delhi into closer military cooperation with Australia, Japan and the US, a process that also brings Western Pacific rivalries into the Indian Ocean.

To escape its “Malacca dilemma”, China has been building oil and gas pipelines from Kunming in China to Kyaukphyu port in Myanmar on the Bay of Bengal and securing port facilities at Gwadar, Pakistan, not far from the Persian Gulf. It was no accident that the Malabar naval exercise of the Quad countries (Australia, Japan, India and the US) in November 2020 had two parts — one in the Bay of Bengal and the other in the Arabian Sea, both the epi-centres of the mounting Indian Ocean naval rivalry.

Consider too the recent statements by US Secretary of the Navy Kenneth Braithwaite of the need to establish a new numbered US fleet for the crossroads of the Indian and Pacific oceans, presumably focusing on the eastern Indian Ocean and Southeast Asia. Even the India-China military rumblings on their high Himalayan border are beginning to have connotations of the evolving stand-off in the broader Indo-Pacific strategic theatre.

China’s Maritime Silk Road includes both the Western Pacific and the Indian Ocean where it seeks to gain influence through economic and infrastructure projects and acquire strategic footholds for China’s maritime power, as other great powers have done in the past.

The contest is not just a military one — it is also for influence through diplomacy and economic statecraft. China’s Maritime Silk Road includes both the Western Pacific and the Indian Ocean where it seeks to gain influence through economic and infrastructure projects and acquire strategic footholds for China’s maritime power, as other great powers have done in the past.

The strategic and commercial linkages between the two oceans were defined graphically by Robert Kaplan in his 2010 book Monsoon: The Indian Ocean and the Future of American Power; “The Straits of Malacca is the Fulda Gap of the 21st century multi-polar world where almost all of the shipping lanes between the Red Sea and the Sea of Japan converge... where the Indian Ocean joins the western Pacific.”

When “Indo-Pacific” is prefixed to “Free and Open” as in the Trump administration’s “Free and Open Indo-Pacific”, the terminology acquires ideological connotations, and so becomes more controversial in Southeast Asia.

So “Indo-Pacific” will not go away, rooted as it is in the geography of the new and growing great power strategic rivalry, the escalating linkages embracing the two geographical regions, and its sponsorship by the world’s leading power. It is now part of the official lexicon of the US and its Asian allies and of some leading European countries which have outlined their own Indo-Pacific strategies. Too much has already been invested in it by key countries. “Asia-Pacific” may have long to live but “Indo-Pacific” will shape more our future mental maps.

When terms such as “Free and Open” are prefixed to “Indo-Pacific” as in the Trump administration’s “Free and Open Indo-Pacific”, the terminology acquires ideological connotations, and so becomes more controversial in Southeast Asia. On this, the Biden administration may have to navigate between the preferences of its major democratic allies and the sensitivities in Southeast Asia, a strategically important region between the two oceans.

This article was first published by ISEAS – Yusof Ishak Institute as Fulcrum Commentary “The “Indo-Pacific” is Here to Stay” by Daljit Singh.