With US President-elect Joe Biden all but ready to be installed in the White House in January, Japanese academic Masafumi Iida explores how the new administration might shape the US's relations with East Asia, especially in terms of the US's military presence in the Indo-Pacific region. He argues that it is necessary for the US to learn from the failures of the Obama administration in underestimating the prowess and ambitions of China. 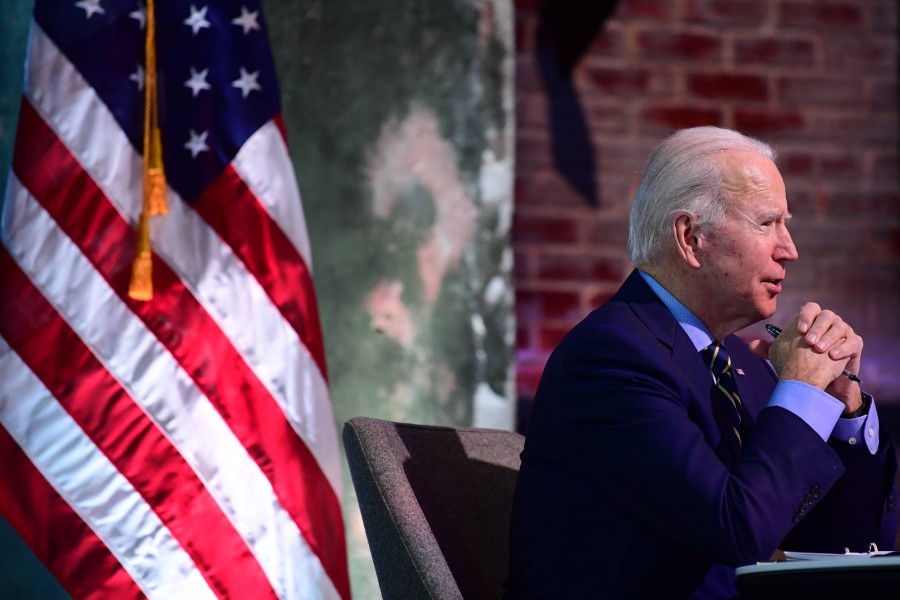 President-elect Joe Biden is briefed by expert members of his national security and foreign policy agency review teams at the Queen Theater on 28 December 2020 in Wilmington, Delaware. (Mark Makela/AFP)

Candice Chan - 11 August 2022
China’s Big Fund has come under scrutiny following a series of high-profile corruption investigations involving key persons in the chip industry. The CHIPS Act was also recently signed into law in the US to counter China, which makes things even more difficult for the sector. Zaobao correspondent Chen Jing speaks to industry experts to find out how the Big Fund can come out of this crisis.
Read more
Translated by Candice Chan on 22 December 2020

In the same month, the Chinese survey vessel Haiyang Dizhi 8 (Marine Geology 8) together with China Coast Guard (CCG) patrol boats, were sent to an area off the shores of Malaysian Borneo to obstruct Malaysian seabed measurement activities.

In August 2020, China launched anti-ship ballistic missiles (ASBM) that are believed to be capable of attacking US Navy aircraft carriers, from two separate sites on the mainland China into the sea somewhere north of the Paracel Islands.

In the East China Sea, CCG patrol vessels have repeatedly pursued Japanese fishing boats inside Japan’s territorial waters near the Senkaku islands (Diaoyu islands to the Chinese)*. Over the oceans surrounding Taiwan, the training activities of the Chinese military fighters, bombers and reconnaissance aircraft are increasing near the Taiwan Strait and the Bashi Channel.

However, the Democratic Party platform states that the China challenge is not primarily a military one and that the US will not be caught in the trap of a new Cold War which would lead to policies with an excessive military edge. The platform also indicates a tendency to neglect military aspects of the competition with China.

Amid these events, Democrat Joe Biden won the US presidential election, and is now president-elect. East Asia and the entire world is looking to see what policy the Biden administration will establish towards China. The Democratic Party’s platform (policy statements) was announced in August 2020 alongside the nomination of Biden as their presidential candidate. The platform highlighted problems with the behaviour of China, indicating that the Party would push back against China’s actions. The platform stressed the party’s commitment to freedom of navigation, resistance against Chinese military intimidation in the South China Sea and the need to support a peaceful resolution of the Taiwan question.

Moreover, it called for the cooperation of Japan, South Korea, Australia, the Philippines and Thailand to strengthen their alliance with the US and realise these policies. The Biden administration will likely adopt a policy of rebuilding cooperative relationships with US allies, which the Donald Trump administration weakened, with the goal of joining forces with the allies to ramp up diplomatic pressure on China.

However, the Democratic Party platform states that the China challenge is not primarily a military one and that the US will not be caught in the trap of a new Cold War which would lead to policies with an excessive military edge. The platform also indicates a tendency to neglect military aspects of the competition with China. It is such thinking that probably influences the appointment of retired commander of the US Central Command Lloyd James Austin III to be the next Secretary of Defense, instead of Michèle Flournoy whom many expected to be Biden’s choice.

In an article he contributed to The Atlantic, Biden praised Austin’s diplomatic skill. As Commanding General of US Forces – Iraq (USF-I) during the Barack Obama administration, Austin commanded the withdrawal of US forces from Iraq. Biden also observed that Austin understands the incredible cost of war and shares Biden’s view that diplomatic policy should be led by diplomats and experts and that the use of force is only the last resort. Biden urged the US to deal with global threats — threats such as pandemics, climate change, nuclear proliferation and the refugee crisis. In the article, Biden never touched upon China, freedom of navigation, or a free and open Indo-Pacific.

To leverage reinforced cooperation between the US and its allies and counteract China’s forceful attempts to change the status quo in the waters of East Asia, it is essential for the US to display its strong resolve and its capability to stand up to China to increase trust between the US and its allies. Flournoy pointed out in her article in Foreign Affairs in June that if the US has the capability to sink all of the Chinese navy’s ships in the South China Sea within 72 hours, the US would be able to deter China. She also stressed the need to reassure US allies.

In June 2012 when China took over the Scarborough Shoal (Huangyan Island to the Chinese), the Obama administration abandoned the Philippines, and showed no interest in using the government’s power to push back against China, despite China’s nonfulfillment of the US mediation. This strategic mistake prompted China to increase its use of brute force, including its attempt to build military bases in the Spratly Islands, and caused Philippine President Rodrigo Duterte to strongly criticise the Obama administration.

*The Senkaku or Diaoyu islands are an uninhabited chain of islands in the East China Sea claimed by China, Taiwan and Japan. A longstanding controversy over the islands’ ownership has soured relations between China and Japan.