Han Yong Hong observes that the US, long thought to be a bastion of democracy, is going through a series of hard knocks these days. The way President Trump has conducted himself during the coronavirus crisis and major protests against racism and police brutality have raised some strong caveats about democratic systems. But what is the alternative for the world to hang on to? For now, a firm belief in democracy seems to be keeping the American spirit afloat, even as everything else seems to be falling down like a house of cards. 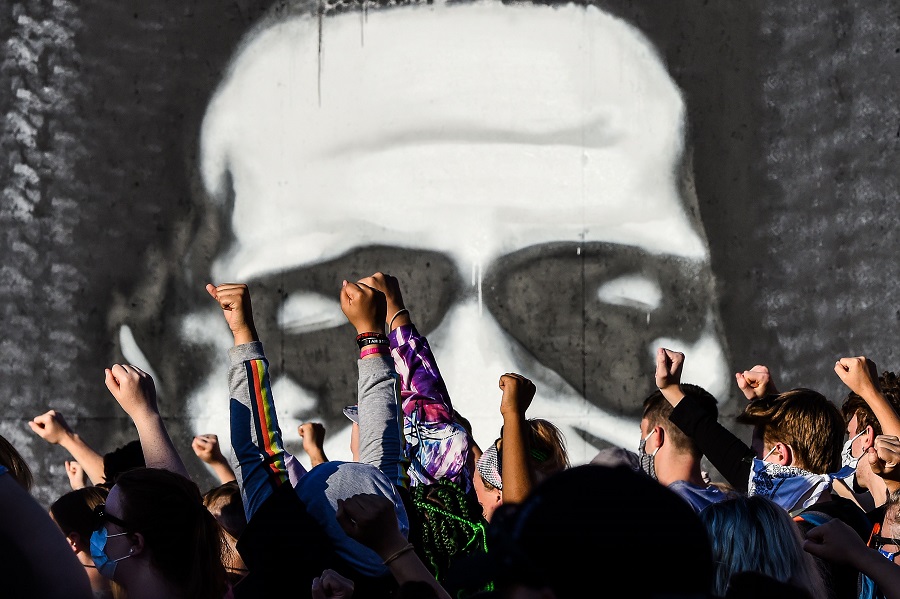 People raise their hands as they protest at the makeshift memorial in honour of George Floyd, on 4 June 2020, in Minneapolis, Minnesota. (Chandan Khanna/AFP)

Grace Chong - 21 June 2022
Over the past several years, Chinese private firms have ferociously invested in India’s tech start-ups. Initially welcomed, China’s diversion of interest from erstwhile US investment has been viewed with some measure of suspicion since the Galwan Valley conflict. Are we living in a world where investment patterns are determined by statecraft? ISAS academic Karthik Nachiappan examines the issue.
Read more
Translated by Grace Chong on 5 June 2020

America’s year 2020 seems to be in tatters. First, they topped the global death toll chart after the coronavirus spun out of control. Then, the longest mass demonstration and street violence in half a century broke out in the country. The US has not only failed to exercise its leadership role as the world’s top power when the world needed it the most, it is also experiencing a challenging period of racial unrest at the same time. Its international image has since taken a turn for the worse.

During this period, the wilful US President Donald Trump continued his inappropriate ways, including making statements that could mislead citizens into thinking that putting disinfectants into their bodies could help fight the coronavirus; announcing a withdrawal from the World Health Organization; threatening to shoot looters in the protests; and openly berating former defense secretary, James Mattis, for opposing the use of military troops to suppress violence. It is extraordinary how far his bizarre tactics can go.

Liberal intellectuals are speechless at how the US has made a laughing stock of itself. On the other hand, Chinese citizens who are displeased with the US seem to have had their anger soothed by the happenings in the US. Many netizens mocked and gloated over them, making sarcastic remarks that the US politicians could now admire a “beautiful sight” from their windows — indirectly alluding to US House Speaker Nancy Pelosi’s remark that the violent protests in Hong Kong last year were "a beautiful sight to behold".

The legitimacy of leaders who threaten to shoot and deploy military troops has also reminded us of the criticisms that China had received from the international community.

The reality before us is indeed an irony. First, riots akin to the 2019 Hong Kong protests were also staged in the US, a self-proclaimed free and democratic country. Second, like the Hong Kong protests, the US has also resorted to “police brutality” to suppress violence. Media reporters were even attacked with rubber bullets and pepper sprays by the US police. The legitimacy of leaders who threaten to shoot and deploy military troops has also reminded us of the criticisms that China had received from the international community.

In this pandemic, African-Americans' rates of infection, death and unemployment are all disproportionately high when compared to its percentage of the population in the country.

In actual fact, America’s race issue is a longstanding one. Even when Barack Obama took office as the country’s first African-American president, there were two instances of mass demonstrations over the deaths of blacks held under police arrest or custody. Compared with American whites not of Latino descent, African-Americans have long been lagging behind in terms of income, education level, health conditions and other areas. They are also faced with a higher crime rate, and a higher possibility of imprisonment as well as death at the hands of the police.

The Covid-19 pandemic has also worsened racial inequality. In this pandemic, African-Americans' rates of infection, death and unemployment are all disproportionately high when compared to its percentage of the population in the country. The current mass demonstrations in the US is spurred by a feeling of pessimistic hopelessness. Strictly speaking, this is the US’s internal conflict.

An increasingly common question is: how could a country with such good institutions have yielded such a leader?

Yet, the glaring problem of the US is not only a problem of its own — the effects it has on the world is not to be neglected. First, the world’s top power is so busy with its internal affairs that it is unable to perform its role as an international leader well, or provide adequate public goods and services. This is evidenced by the Trump administration’s repeated withdrawal from international affairs and organisations. Now, it is faced with a new crisis — the international community is casting doubt on, and even shattering the myth of democracy, the country’s most well-known core value.

An increasingly common question is: how could a country with such good institutions have yielded such a leader? Not only does this question come from other countries, it comes from the country’s own intellectual elites. They are angry that Trump has trampled on the US’s international soft power capital, that he does not understand international trade, that he is unable to portray the democratic spirit that the US ought to have, and that he even lacks basic respect towards science.

These reflections and disputes have made clear to various parties the characteristics and limitations of democratic institutions. Many people have indeed made America out to be more than it is; American-style democracy is also no elixir that solves every social and political problem. A democratic system needs to be upheld by concrete conditions: a powerful middle class, responsible elites, rationalism, law, and more importantly, a spirit of compromise. If these conditions are non-existent or weak, a two or multi-party democratic system could sink into fierce party struggles or lead to ineffective parliamentary processes. In actual fact, the effectiveness of American politics has come into question for a long time. When Obama took office, he rode on the slogan of “change”. However, the US did not find the formula for “change” under his reign. In the end, they found Trump.

Looking around in the world today, there is no other ideology that can better form a system or be more persuasive in uniting people.

Yet, while American-style democracy is not suitable for all countries, no good would come to the world if the value of democracy becomes widely rejected and stigmatised either. Democracy and its related ideologies, such as civil rights, the sanctity of private property, freedom of thought and speech, and law, are extremely important improvements made in the development of human civilisation. Looking around in the world today, there is no other ideology that can better form a system or be more persuasive in uniting people. If we no longer hold fast to this value, the international community or the society of a nation would be left with only mercenary and hard power principles. It would be sad to see a world that considers power as truth.

Compared with its competitors, the US is clearly well ahead in terms of conviction and confidence.

In the face of various problems troubling the US, anxious elites have recently engaged in intense discussions on academic forums about US-China relations and ways in which American democracy can be restored. Observers predict that according to historical patterns, the US is currently in a state of shock and would only be able to recover from it in the next or following year. These discussions highlight one thing: while elites are very dissatisfied with Trump, they remain confident of America’s institutions and believe that the vitality and resilience of democracy would ultimately lead the US out of its current state of poor governance. Compared with its competitors, the US is clearly well ahead in terms of conviction and confidence.

Related: Protests in the US and HK: Which is 'a beautiful sight to behold'? | Western democracy's worst enemy is itself, not China | America's tussle with WHO: Are UN specialised agencies 'toothless and useless'?