Huawei’s digital talent programme in Indonesia is contributing to China’s soft power as the latter seeks to engage Indonesia as an important node of its Belt and Road Initiative. Indonesia stands to gain from the exchange but also needs to be wary of possible cybersecurity concerns. 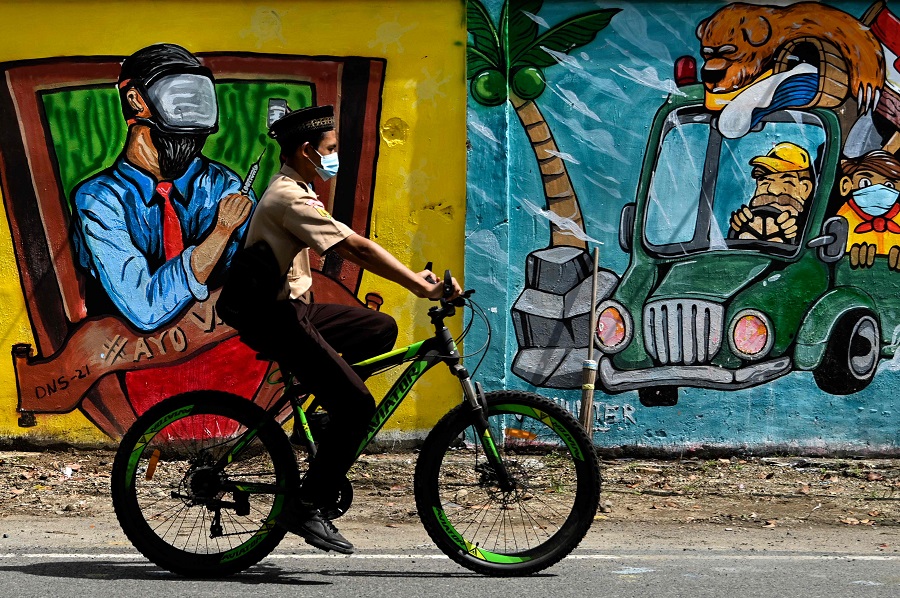 A student cycles past a wall mural in Banda Aceh, Indonesia, on 10 December 2021. (Chaideer Mahyuddin/AFP)

Grace Chong - 27 January 2023
Regulators are ramping up efforts to cull poorly performing firms and those that violate the rules or break the law. A record number of companies got the boot from Chinese mainland stock exchanges last year, and that number could even double in 2023.
Read more
Translated by Grace Chong on 25 January 2022

China has expanded its soft power endeavours in Indonesia to support its growing foothold in the country, namely through media influence, education partnerships and cultural exchanges.

Another important avenue is Huawei’s digital talent training programme, which is being rolled out in more than 33 colleges and universities in Indonesia.

The programme aims to encourage the acceleration of digital transformation in Indonesia, namely by nurturing young digital talents.

According to Jacky Chen, CEO of Huawei Indonesia, these digital talents would be equipped with knowledge and skills in Artificial Intelligence (AI), Internet of Things (IoT), big data and the cloud.

These aims will be achieved through a number of programmes such as the ICT Academy, which has been launched in over 70 countries. This programme is divided into several other sub-programmes, such as ICT Competition, Seeds for the Future and TechDay which are organised to expand the skills of young minds in utilising digital technology. The ICT Competition saw the participation of 53 teams from 24 universities and a total of 1,164 Indonesian students.

In addition, Huawei also initiated the Spark programme to encourage young individuals to build their own start-ups. In Indonesia, the programme has trained approximately 52,000 Indonesians between 2020 to 2021.

In implementing the Huawei digital talent programme, the company has also collaborated with the largest telecommunications operator in Indonesia, Telkomsel, through a memorandum of understanding (MOU) on digital development.

Under the MOU, 400 Telkomsel employees will receive training for 200 days provided by experts from Huawei. Topics that will be touched on include “Leadership in the Digital Transformation Area”, “Global Operator Benchmark”, and “Technology Knowledge Transfer” covering 5G, customer experience management, network function virtualisation (NFV), software-defined networking (SDN), the cloud, big data, AI, as well as the IoT.

It is difficult to deny that Huawei’s digital talent programme is a very large part of China’s soft power efforts in Indonesia, a country crucial to the realisation of China’s Belt and Road Initiatives (BRI).

On a regional level, there have been similar efforts in the form of a MOU between Huawei and ASEAN Foundation on developing digital talents in the region. The collaboration specifically highlighted the two parties’ readiness to implement ASEAN Seeds for the Future, a scaled-up version of Huawei’s flagship global corporate social responsibility (CSR) programme since 2008.

Another facet of China’s soft power

It is difficult to deny that Huawei’s digital talent programme is a very large part of China’s soft power efforts in Indonesia, a country crucial to the realisation of China’s Belt and Road Initiatives (BRI).

First, facilitating the process of digital transformation in the country is China’s way of presenting a good image of Chinese technology giants so that they can be accepted in the local community. In 2021, Huawei was named the "top digital talent contributor in Indonesia” by detik.com.

Such goodwill could also help to defuse tensions between Chinese companies and local citizens, taking reference from the cases in Sri Lanka and Vietnam, say Nils Hungerland and Kenddrick Chan in their LSE Ideas Digital IR Working Paper “Assessing China’s Digital Silk Road: Huawei’s Engagement in Nigeria”. In Indonesia, there is growing negative sentiment towards Chinese investments due to the growing number of Chinese workers and allegations of a new type of imperialism.

As mentioned in Hungerland and Chan’s paper, Huawei’s engagement in Indonesia could further benefit China in the sense that non-digital infrastructure projects are likely to have digital components in the future. For example, in the rail industry, control and signalling systems as well as smart monitoring systems are expected to be used in the operations. This could benefit China’s railway projects in Indonesia. In addition, digital talents could contribute to the initiation of trading platforms for the export of Chinese goods. CA-B2B.com, an emerging Chinese-African e-commerce trading platform in Africa, is a good example.

Huawei can also offer additional services by nurturing individuals equipped to implement Chinese-run data centres. This could aid China in the collection of surveillance data. In Nigeria, for instance, actors involved in Huawei's digital efforts may already share data with the government in Beijing. All in all, programmes such as these could create further reliance on Chinese products and technologies.

Not to mention that China is also able to disseminate information about Chinese policies and practices as they relate to the internet and technology. This signifies that Beijing is not only exporting its technological infrastructure and knowledge, but also ideas and policies.