Japanese academic: The politics behind the name 'Taiwanese Representative Office in Lithuania'

While Beijing has objected strongly to the Lithuanian government's move of allowing Taiwan to open a representative office under the name “Taiwan” rather than “Taipei”, Taiwan has lashed out at “autocratic” Beijing, saying that its ties with Lithuania are based on the shared values of freedom, democracy, respect for human rights and the rule of law. Japanese academic Shin Kawashima examines the names of Taiwan's overseas offices and of various countries' offices in Taiwan, analysing the subtleties behind the different naming conventions. 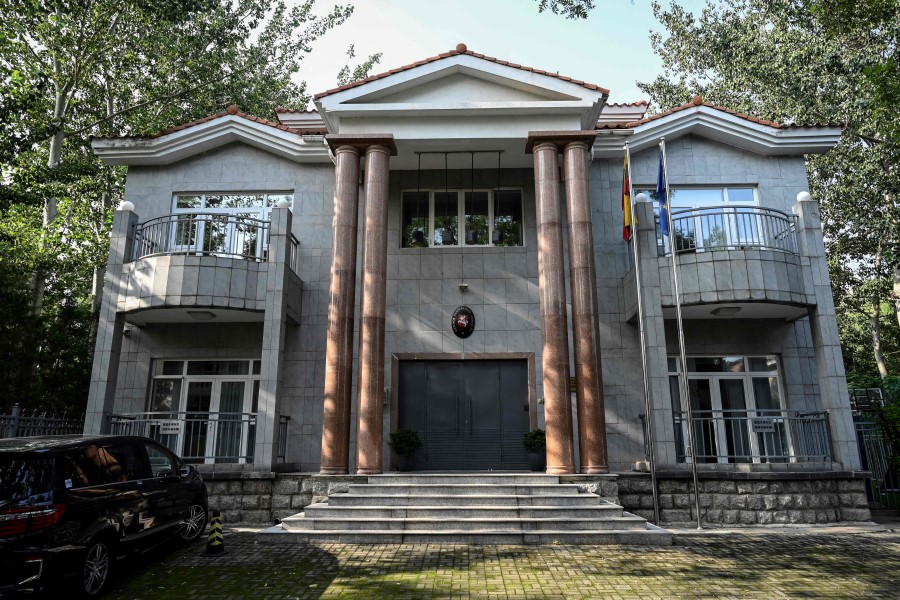 The Lithuanian Embassy in Beijing on 10 August 2021, as China demanded Lithuania to recall its envoy to Beijing. (Jade Gao/AFP)

Candice Chan - 30 January 2023
A mall in Shenzhen came under fire for putting up white lanterns with black text as part of its Chinese New Year decorations, while an “ugly” rabbit-shaped light decoration was removed from another mall in Chongqing. Academic Zhang Tiankan muses on tradition and innovation, and the evolution of traditional decorations.
Read more
Translated by Candice Chan on 26 August 2021

The Chinese Foreign Ministry has taken issue with the fact that the Lithuanian government has allowed Taiwan to open a “representative office” under the name of “Taiwan”, in disregard of its diplomatic relations with the People's Republic of China (PRC).

The ministry asserts that “this decision brazenly violates the spirit of the communique on the establishment of diplomatic relations between China and Lithuania and severely undermines China’s sovereignty and territorial integrity”. China has urged Lithuania to “rectify its wrong decision” as well as attempted to head off Taiwan by criticising “Taiwan independence” as a “dead end” and warning that “any attempt at separatist activities in the international arena is doomed to fail”.

Except for countries with which Taiwan has diplomatic relations as the Republic of China, no representative office under the name of “Taiwan” exists. Instead, the name “Taipei” is used...

What can be observed from these examples is that in the case of the US and Papua New Guinea, “Taiwan” is being used as the name of the place where the representative offices are located, whereas in the case of Japan and Oman, “Taiwan” is being used on a par with “Japan” and “Oman”, and these cannot really be said to refer to the location of the representative offices. Nigeria goes a step further by including reference to the “Republic of China” in the name “in Taiwan, R.O.C.”

Therefore, the use of the name “Taiwan” in the names of foreign representative offices located in Taiwan can in some cases be understood as the name of the geographical location, while in other cases “Taiwan” is clearly juxtaposed with the name of another country, or even used in combination with R.O.C.

The matter of naming format is not China’s only concern, however. China has criticised the emergence of a representative office under the name “Taiwan”, linking it to Taiwan independence. Its criticism of Lithuania is also likely to stem from displeasure at Lithuania’s recent tough stance on China, in particular regarding the issue of human rights. China’s stance may also signify an attempt to curb what it views as the recent tendency of pro-democracy parties and political forces in European countries to support Taiwan as well as criticise China.

While China may have its own understanding and mindset, it will be difficult for other countries to appreciate the real problem unless the issue of naming format mentioned above is reconciled with these substantive issues.

Related: Taiwan's ‘epidemic diplomacy' may invite reprisals from Beijing | Can Taiwan fight for as long as it takes? | Taiwan's unequal status in US-Taiwan trade talks | Will the Taiwan Strait issue be internationalised under Biden?