Japan recently agreed to increase its five-year budget for hosting US troops in Japan to 1.05 trillion yen, but this is not the usual "sympathy budget" the Japanese set aside for this purpose. This time round, it has made sure that a greater proportion of the funding will go towards enhancing its Self-Defence Forces and overall Japan-US security cooperation. 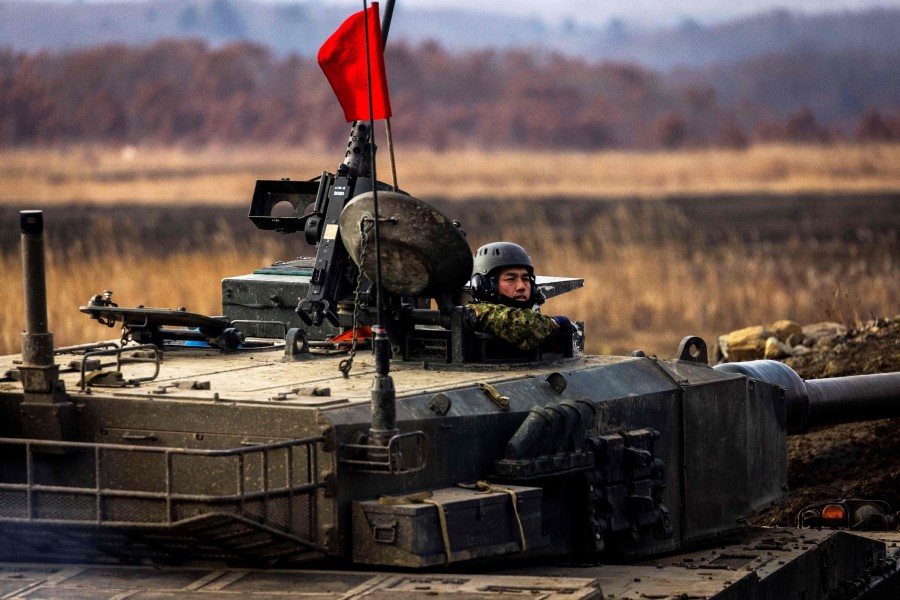 Candice Chan - 13 May 2022
With Ferdinand Marcos Jr achieving a landslide win in the Philippine presidential election, how will the Philippines’ China policy change? In particular, given the legacy of the Marcos family’s good relations with China as well as former President Duterte’s pro-China stance, how will the incoming president handle relations with the US?
Read more
Translated by Candice Chan on 17 January 2022

The recently concluded US-Japan Security Consultative Committee 2+2 talks have resulted in further developments in security cooperation. Japan and the US have signed a special agreement on the funding of US troops stationed in Japan from 2022 to 2026.

Japan has agreed to increase its five-year budget, totalling 1.05 trillion yen (US$9.2 billion), with an average annual increase of about 10 billion yen over the 2021 spending.

In particular, the spending will be skewed towards improving the interoperability of Japan’s Self-Defence Forces (SDF) and the US forces, which in reality will be for shared Japan-US use.

Funding for US troops in Japan is a garrison allowance provided by Japan at the request of the US. In principle, the 1960 US-Japan Status of Forces Agreement stipulates that the US bears this cost. However, due to the increased costs for the stationed US forces as a result of the appreciation of the Japanese yen against the US dollar in the 1970s, the US requested Japan to share the costs.

Since 1978, Japan has been funding a portion of staff salaries at the US military bases in Japan. As this is beyond the 1960 Japan-US Security Treaty, Japan has termed it the omoiyari yosan (sympathy budget), or “cost-sharing for the US forces stationed in Japan”.

According to the Japan-US Special Measures Agreements (SMA) since 1987, the expenditure borne by Japan includes the salaries of the staff of US military bases in Japan, utilities, maintenance of facilities and training relocation costs. As a practice, the omoiyari yosan is renegotiated every five years.

Preparations for this round of negotiations, mainly to address the issue of funding increase, were started by the Abe and Trump administrations.

After taking office as US president, Trump requested Japan to substantially increase its funding for US forces stationed in Japan and to liberalise the Japanese market. These were the two ways in which the US pressurised Japan.

John Bolton, the then former US national security adviser, wrote in his memoirs that Trump had even asked Japan to bear US$8 billion a year for the US forces stationed in Japan.

However, the Japanese government has long complained about this huge spending, for which public approval is particularly difficult to obtain. Japan believes that it bears the highest costs among US allies and has denied increasing the funding.

Contrary to Japan’s previous position on not increasing the funding, the outcomes of these negotiations constitute an increase in funding and adjustments to the items to be funded.

Japan’s Ministry of Defence estimated in 2015 that Japan provided more than 80% of US stationing costs. Mindful of US pressures in negotiations, Japan completed the US-Japan Trade Agreement negotiations in 2019, so as to avoid concurrent negotiations on the funding for US forces stationed in Japan.

After Biden took office, due to differing views, both sides agreed to extend the current SMA that would expire in March 2021 for a year. The latest renegotiations began in August 2021.

Contrary to Japan’s previous position on not increasing the funding, the outcomes of these negotiations constitute an increase in funding and adjustments to the items to be funded. These embody Japan’s new considerations in working with the Biden administration to strengthen the Japan-US alliance and security strategy.

First, Japan has decided to increase its military expenditure in line with US strategy. Similar to the Trump administration, the Biden administration is pivoting towards relying on US allies to maintain its hegemony and is particularly hopeful that Japan will expand its security responsibilities.

In April 2021, the then Japanese PM Yoshihide Suga visited the US, and promised to enhance its military capabilities and take on greater security responsibilities. The Japanese government and parliament actively planned to increase Japan’s military spending and not restrict it to 1% of GDP.

In the Japanese general election in October 2021, the Liberal Democratic Party’s campaign manifesto has even included raising Japan’s defence budget above 2% of GDP, at the level of the NATO countries. The newly announced 2022 fiscal budget features the biggest ever defence budget at 1.09% of GDP, with the increase far exceeding those for public works and for culture, education and scientific research.

Using the dire security environment as an excuse and in the pretext of enhancing the readiness and resilience of the alliance, Japan has openly increased its defence budget while downplaying the “sympathy” quotient...

Second, Japan must maintain the stability of the US forces stationed in Japan. For a long time, the Japanese have been unhappy with the US troops harassing the locals and with the omoiyari yosan.

In the latest agreement, Japan’s spending on the US bases’ utility costs will be reduced in stages from 60% to 35% in the next five years, but increased for the relocation of fighter jet training from Okinawa to Alaska which will reduce the burden on the southern island prefecture.

Using the dire security environment as an excuse and in the pretext of enhancing the readiness and resilience of the alliance, Japan has openly increased its defence budget while downplaying the “sympathy” quotient, in the effort to ease national discontent and to a certain extent meeting the US request to shoulder greater financial burden.

The new agreement also aims to increase the procurement of new AI systems for training the SDF to improve its interoperability with the US forces and build hardened aircraft facilities to protect US fighters from attack as well as hangars for rapid attack.

Japan has decided to call this the domei kyojinka yosan (budget to enhance resilience of the alliance) to enhance its military, strengthen the combat capabilities of Japan-US joint operations and accelerate the transformation of security strategy.

Killing two birds with one stone

The reduction in garrison allowance for the stationed US forces and the increase in the proportion of funding for enhancing interoperable combat capabilities illustrate Japan’s eagerness to enhance its military and Japan-US security cooperation. Japanese Defence Minister Nobuo Kishi said that the new agreement demonstrates the importance of strengthening the alliance and shows the resolve of the two countries to stand up to challenges.

Evidently, Japanese funding for the US military in Japan is no longer a sympathy budget solely for the stationed US forces. Instead, it will be used to improve the combat and anti-strike capabilities of the US forces in Japan, as well as to improve the Japan-US interoperable combat capabilities, which includes the SDF. Japan has decided to call this the domei kyojinka yosan (budget to enhance resilience of the alliance) to enhance its military, strengthen the combat capabilities of Japan-US joint operations and accelerate the transformation of security strategy. Indeed, the essence of Japanese funding for US forces stationed in Japan has changed.

Related: US academic: Is Japan a true and loyal US ally? | What removing the defence budget cap means for Japan’s role in the Indo-Pacific | Japanese academic: Will Japan send troops to 'protect' Taiwan? | The real reason why Japan is following the US’s lead