Metaverse: Why Microsoft is acquiring Activision

Technology expert Yin Ruizhi notes that Microsoft’s recent announcement to acquire gaming company Activision Blizzard is not just about breaking into the gaming market, but an important step towards building its capabilities to develop the metaverse. Can it succeed and will other Western tech giants follow? 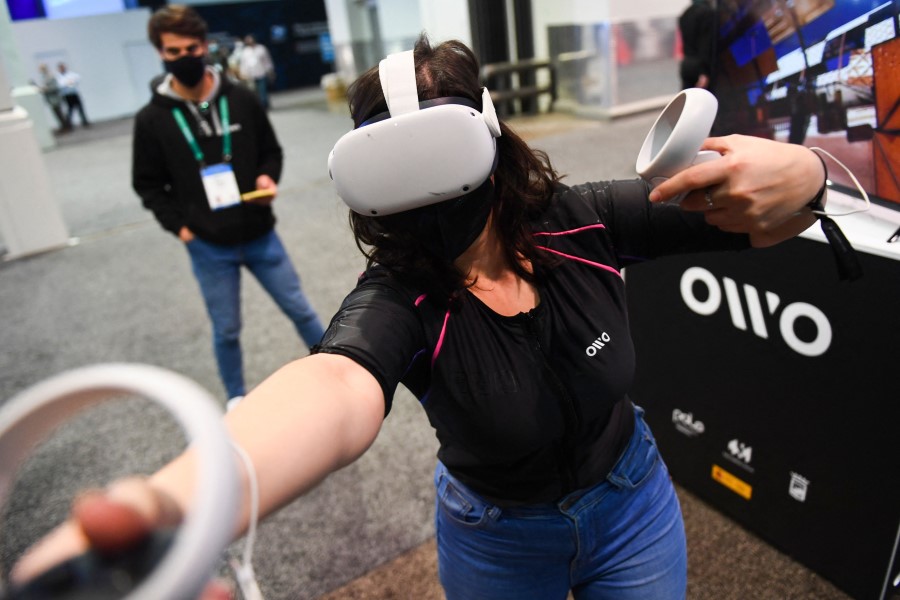 A user demonstrates the Owo vest, which allows users to feel physical sensations during metaverse experiences such as virtual reality games, including wind, gunfire or punching, at the Consumer Electronics Show on 5 January 2022 in Las Vegas, Nevada. (Patrick T. Fallon/AFP)

Candice Chan - 20 June 2022
The newly launched Indo-Pacific Economic Framework for Prosperity has arguably low or no ambition around market access, but perhaps because of its non-contentious nature, could be a promising start. Countries in the region welcome options amid fears of Chinese economic coercion and may just provide the momentum needed when the time is ripe.
Read more
Translated by Candice Chan on 16 February 2022

On 18 January 2022, Microsoft announced that it will acquire Activision Blizzard for US$95 per share, in an all-cash transaction valued at US$68.7 billion, the most expensive acquisition of a gaming company in history. In their analysis of the acquisition, many tech commentators have focused on the financial aspects and the outlook of the gaming market, while overlooking its significance in the development of the metaverse.

A company must be able to handle platforms as well as gaming to successfully realise the metaverse. Hence, Microsoft’s experiment is an important test before US internet giants can build the virtual space.

In a previous article, we mentioned two necessary features of the metaverse. First, it has to be of a large enough scale that can run continuously, with the capacity to allow massive numbers of users — up to the real-world global population — to socialise and interact in this virtual space.

No matter how realistic the metaverse is, if it can only take in a limited number of people, or if it does not run continuously, it cannot lead to broad, deep and diverse interaction or build a virtual world that can co-exist with the real world. It would be difficult for a company with no experience in running a large-scale global platform to play this role well.

If tech giants want to become a metaverse platform, they must have capabilities in these two areas. However, the past 30 years of the internet era tells us that it is extremely difficult to do both.

As gaming companies often have to use cloud servers, cloud computing leader Amazon committed itself to entering the gaming market in 2014. However, the company gave up after five years of fruitless effort.

The year Amazon gave up on the gaming industry, Google prominently took over the baton and started to develop its own games. As the first to truly dominate the market in the internet era, Google boasted many engineering talents. Unfortunately, Google’s efforts also ended in disappointment two years later.

However, the concepts behind the gaming industry and platform operations are polar opposites.

Apple, which single-handedly built the mobile internet era, saw all of its attempts at gaming fail — it has avoided the industry since Steve Jobs’ return to the company in 1997. As for Meta (formerly known as Facebook), with the most high-profile efforts at the metaverse, besides the VR games that it is developing, it has nothing to offer in the currently dominant mobile Internet game market.

The fundamental reason behind this situation is that platform operations require the operator to focus on the commonalities of content and think rationally to allow various content operators to grow on the same platform. For example, the initial main purpose of Google’s search engine was to find commonalities among websites with different themes, styles and target audiences, and build a platform to match these websites with users, benefiting both parties.

However, the concepts behind the gaming industry and platform operations are polar opposites. The core of gaming is that developers create their own content that can give users the ultimate experience, with which they also interact with users. And so, games development is more like creating a work of art, like a movie with soul, rather than coming up with a set of rational rules.

This contradiction results in the two sectors being managed in completely different ways and led by talents who are polar opposites.

There is only one instance in the world of an internet platform gaining major success in the gaming industry: China’s Tencent.

There is only one instance in the world of an internet platform gaining major success in the gaming industry: China’s Tencent. While we will not discuss the factors leading to Tencent's success in this article, it is worth noting that its gaming and internet platform arms are each run by two different types of people.

As of now, Microsoft and Meta are the only two Western internet giants that are still trying to consolidate its gaming and internet platform operations. It is a threshold they have to cross if they want to succeed at the metaverse.

Related: Metaverse: Plans of the tech giants | Metaverse: A bubble that could soon burst? | Will overregulation kill Chinese firms' metaverse ambitions? | A metaverse with Chinese characteristics?