Must China choose sides in the Russia-Ukraine war?

Online discourse on China’s position in the Russia-Ukraine war is heating up this week as Western and Ukrainian officials criticise China’s ambiguous stance. Meanwhile, the West continues to put pressure on China to declare which side it is on despite Chinese officials’ strong rhetoric that it will judge the matter without external coercion and that the US and NATO should “shoulder their due responsibilities”. Zaobao correspondent Yu Zeyuan discusses how China is justifying its stance of not taking sides. 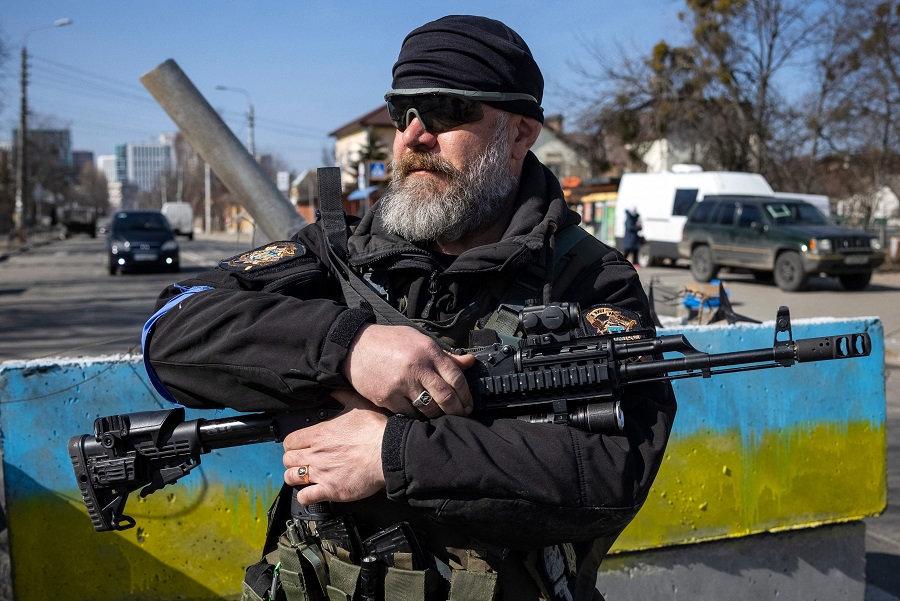 A volunteer takes position at a checkpoint in a district in Kyiv, Ukraine, on 20 March 2022. (Fadel Senna/AFP)

Grace Chong - 2 August 2022
Taiwanese commentator Chen Kuohsiang believes that China’s economy is under threat, with the unravelling of intertwining issues in the financial industry, property sector and government finances that cannot be easily resolved. How will China boost its investment-led economy, push down unemployment rates, and regain consumer and investor confidence?
Read more
Translated by Grace Chong on 21 March 2022

As the Russia-Ukraine war continues, the US and other Western countries have imposed strict sanctions on Russia while warning China against providing military aid or other resources to Russia. They have also pressured China to join them in sanctioning Russia or risk further action from the West.

‘Those who caused the Ukraine crisis’ should resolve it

China continues to urge negotiations between Russia and Ukraine, while adopting an ambiguous strategy towards both sides — providing humanitarian aid to Ukraine but emphasising that “it takes the one who started the issue to resolve it”, implying that the US and NATO are “those who caused the Ukraine crisis”.

China also demanded NATO member states to “shoulder their due responsibilities”, reiterating that Western sanctions against Russia “shall not harm the legitimate rights and interests of China and other sides concerned”.

Following the video call between US President Joe Biden and Chinese President Xi Jinping on 18 March, the US continues to pressure China to choose sides in the next few days or weeks.

In response, on 19 March, Chinese State Councilor and Foreign Minister Wang Yi reiterated that China would continue to “make an independent judgement based on the merits of the matter itself and in an objective and fair manner”. He said, “We will never accept any external coercion or pressure, and we will also oppose any groundless accusations and suspicion against China.”

While there is certainly nothing wrong with China’s position of urging peace talks, from Ukraine’s perspective, the most urgent matter is to stop the Russian offensive and drive its troops out of Ukrainian territory.

Wang highlighted that Xi had put forward China’s solution to the Ukraine crisis during his meeting with Biden. This mainly comprised two aspects. First that the pressing issue was “for all parties to work together to promote dialogue and negotiation between the parties concerned, cease hostilities as soon as possible, and avoid civilian casualties, in particular, preventing a humanitarian crisis”; second, that the long-term solution was to “reject the Cold War mentality, refrain from bloc confrontation, and truly build a balanced, effective and sustainable security architecture for the region, so that long-term stability and security in the European continent can be achieved”.

While there is certainly nothing wrong with China’s position of urging peace talks, from Ukraine’s perspective, the most urgent matter is to stop the Russian offensive and drive its troops out of Ukrainian territory. At the same time, Russia is still militarily attacking Ukraine despite its losses, forcing Ukraine to make more concessions on the negotiation table. With such great differences in demands from both sides, signs of peace and successful negotiations are yet to be seen.

Ukrainian officials speak out against China

While China did not openly choose sides in the Russia-Ukraine war, the West and Ukraine know that Russia will be able to maintain its combat capabilities as long as China continues normal trade and economic relations with Russia. At the same time, as NATO will not initiate a direct war with Russia, it is unknown how long Ukraine can hold out with Western aid alone. Hence, the US is pressuring China to also impose sanctions on Russia, or at least not provide Russia with economic support.

Besides the US, Ukraine is also starting to show its dissatisfaction with China. On 19 March, Mykhailo Podoliak, adviser to the head of the office of the president of Ukraine, tweeted, “[China] can be the global security system’s important element if it makes a [sic] right decision to support the civilized countries’ coalition & condemn [Russian] barbarism. It is a chance to sit at the table as equals.”

He added that “the West must explain to Beijing how $1.6 trillion differs from $150 billion”. According to Kyiv-based news agency Interfax-Ukraine, the figures refer to China’s trade with Western countries and Russia respectively.

Ukraine's Deputy Prime Minister Iryna Vereshchuk has also expressed her dissatisfaction on social media over comments by Chinese foreign ministry spokesperson Zhao Lijian objecting to the US sending weapons to Ukraine. She called on China to stop supporting Russia, and stressed that Ukraine does not need food and blankets, but security in the skies over their residential areas.

The Chinese authorities did not respond to Podoliak or Vereshchuk, but Chinese state media Global Times quoted a netizen saying, “[China] has always been an important part of the global security system. China does not need your ‘chance’, thank you.”

At the same time, there is an intense debate within China about the Russia-Ukraine war. Recently, Hu Wei, a professor with Shanghai’s Communist Party school, wrote an essay noting that Russia’s military action on Ukraine constitutes an irreversible mistake; the West’s eventual involvement in the war cannot be ruled out and the finishing blow would be even worse for Putin given that Russia’s military power is no match for NATO’s; the US would regain leadership in the Western world, and the West would become more united; the West will possess more “hegemony” both in terms of military power and in terms of values and institutions, its hard power and soft power will reach new heights.

“China cannot be tied to Putin and needs to be cut off as soon as possible… At present, it is estimated that there is still a window period of one or two weeks before China loses its wiggle room." — Hu Wei, a professor with Shanghai’s Communist Party school

Hu further said, “China cannot be tied to Putin and needs to be cut off as soon as possible… At present, it is estimated that there is still a window period of one or two weeks before China loses its wiggle room. China must act decisively.”

Hu’s views have gained mixed reactions from netizens. Internet commentator Sima Nan (real name Yu Li) wrote an article saying that Hu’s essay completely disregards the stark history of China-Russia relations and ignores the powerful intrinsic dynamics between them, and that Hu was frightened by the Americans.

"...even if the US goes all the way and Biden orders a mobilisation, it would not change the strategic resilience of China and Russia.” — Internet commentator Sima Nan

Sima added, “Not to mention that not a single US or NATO soldier has dared enter Ukraine to join the fight against the Russian troops — even if the US goes all the way and Biden orders a mobilisation, it would not change the strategic resilience of China and Russia.”

Overall, within China, the official position continues to garner mainstream support, which forms the basis for the Chinese government insisting on peace talks and objecting to the West forcing it to take sides.

But the US will not allow China to distance itself from the Russia-Ukraine war, or even reap incidental benefits. With the growing damage of the war on Russia, Ukraine and the global economy, the US and its allies will crank up the pressure on China, which will make it more difficult for China to maintain its moral position and strategic benefits.

Related: Lessons from Ukraine: Russia might fall into decline by going against global sentiment | Did China miscalculate the Ukraine war? | Why Taiwan is not Ukraine | Lessons from Ukraine: Is it time to give up strategic ambiguity in the Taiwan Strait? | Will China be emboldened by Russia's invasion of Ukraine? | China's tricky position on the Russia-Ukraine war | Can China benefit as a bystander in the Russia-Ukraine crisis?