Phase one trade deal a humiliation to China?

Yu Zeyuan says it would be quite wrong to think that China stands on the losing end of the recently concluded phase one Economic and Trade Agreement between the US and China. The picture may be quite the opposite. 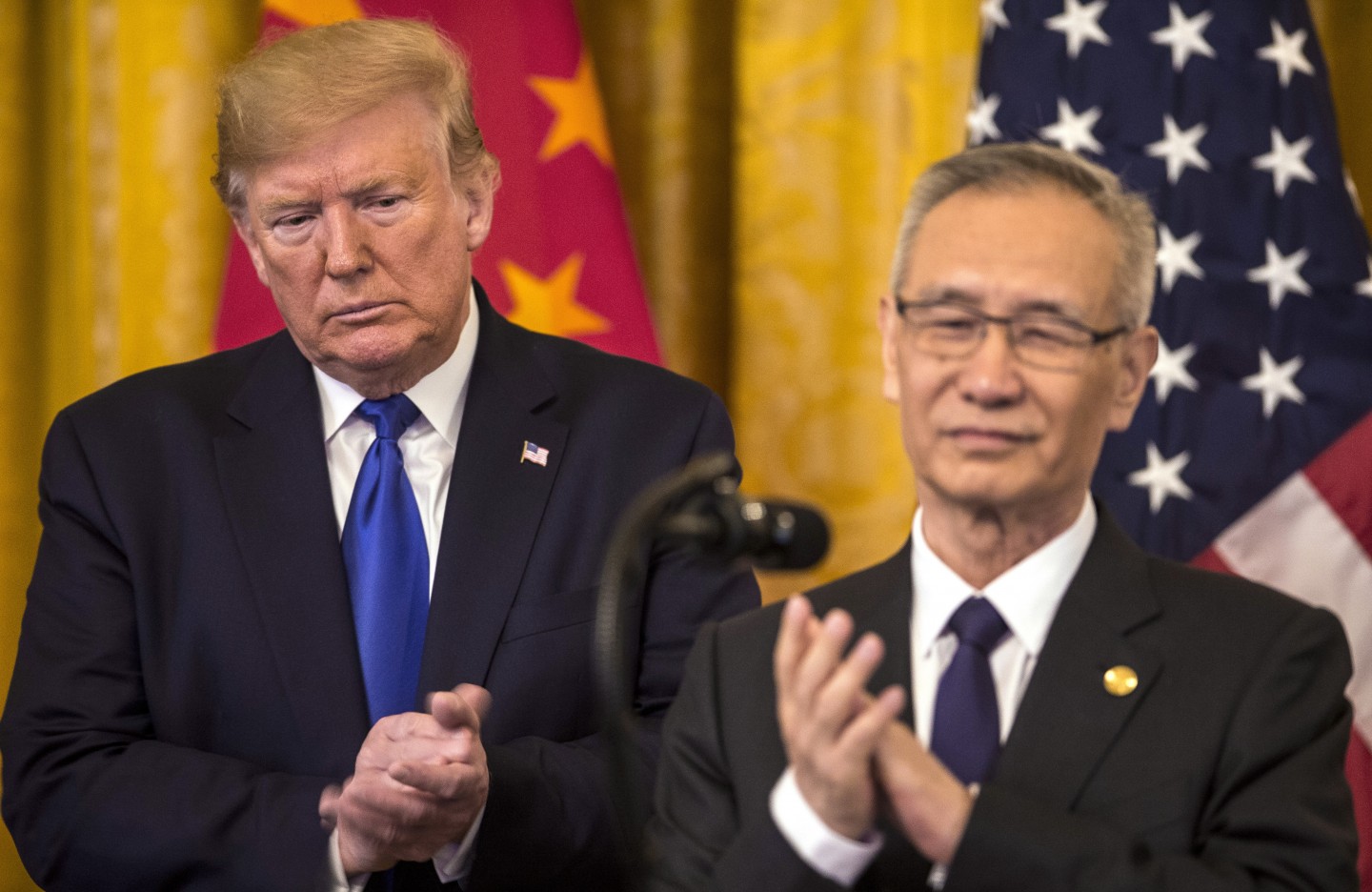 US President Donald Trump applauds as Liu He, China's vice premier, speaks during a signing ceremony for the US-China phase-one trade agreement in Washington on 15 January 2020. (Zach Gibson/Bloomberg)

Grace Chong - 11 January 2022
Chen I-hsin asserts that the US is no longer in a position to facilitate cross-strait talks, given that China’s national strength has increased considerably and the US is no longer seen as a neutral arbiter. Moreover, the “two states” theory which Taiwan’s ruling party seems to support leaves little room for dialogue, rendering any pressure from the US futile.
Read more
Translated by Grace Chong on 20 January 2020

Numerous commentaries on who won or lost in the China-US trade war have sprung up, following the signing of the phase one trade agreement. Some Chinese online commentators believe that the US won, while China lost. Some even termed the agreement as the “Treaty of Shimonoseki 2.0”.

The main reason for this stance seems to be that the phrase “China shall” appeared over 100 times in the English version of the agreement, and over 80 times in the Chinese version. It seems that China is beating a retreat of concessions and compromises while the US is making advances.

Also, the trade agreement states that, “China shall ensure that purchases and imports into China from the United States of the manufactured goods, agricultural goods, energy products, and services... exceed the corresponding 2017 baseline amount by no less than $200 billion [around S$268 billion]”. Additionally, the US did not completely remove tariffs imposed on Chinese products. Doesn’t this imply that China is being forced into swallowing the bitter pill of a massive volume of imported US products?

These arguments are indeed valid. While it may be true that China made multiple concessions in signing the agreement when compared to the principles it had insisted on at the beginning of the China-US trade war, to count China’s concessions as its failure is not an objective assessment of the situation either.

Looking at the agreement’s content, it does seem like the US demanded a lot from China. For example, in the past, the plaintiff was in charge of producing evidence in the case of a trade secret misappropriation. Under the new agreement, however, “the burden of production of evidence or burden of proof, as appropriate, shifts to the accused party in a civil judicial proceeding for trade secret misappropriation”. This burden-shifting seems to be extremely unfavourable to Chinese enterprises that are often accused of stealing trade secrets. At the same time, the agreement explicitly increased the penalty for violation of intellectual property rights. It is thus expected that some Chinese enterprises will have to pay a heavy price while adapting to stringent new rules in the protection of trade secrets and intellectual property rights.

It further says in the agreement that in terms of technology transfer, “any transfer or licensing of technology between persons of a Party and those of the other Party must be based on market terms that are voluntary and reflect mutual agreement”. In addition, “a Party shall not support or direct the outbound foreign direct investment activities of its persons aimed at acquiring foreign technology with respect to sectors and industries targeted by its industrial plans that create distortion”. It also says that in terms of opening the market, “no later than April 1, 2020, China shall remove the foreign equity cap in the life, pension, and health insurance sectors and allow wholly U.S.-owned insurance companies to participate in these sectors”.

Thus, while China has accepted many of the US’s demands, it does not imply that China only has obligations, but not any rights.

These terms demonstrate China’s acknowledgement and fulfilment of the various demands that the US laid out at the beginning of the trade war, and even prior to the outbreak of the trade war.

However, the US is not making a one-sided demand on China — following many of the terms labelled “China shall”, the line “the United States affirms that existing US measures afford treatment equivalent to that provided for in this Article” comes shortly after, demonstrating that both parties need to assume the same obligations.

Thus, while China has accepted many of the US’s demands, it does not imply that China only has obligations, but not any rights. Moreover, in the long term, a serious implementation of the agreement will bring forth huge benefits for elevating the international competitiveness of Chinese enterprises, growing the Chinese economy, and sustaining the development of the Chinese society.

For example, China is bound by the agreement to strengthen its judicial procedures on intellectual property rights, “combat the prevalence of counterfeit or pirated goods on e-commerce platforms” and “take sustained and effective action to stop the manufacture and to block the distribution of pirated and counterfeit products”. It is also called upon to ensure the removal of “discriminatory regulatory processes and requirements” and the granting of market access to a larger extent.

These conditions not only protects the legal rights of foreign investments in China, but also deepens China’s reform and opening up. This is the only way in which a business and legal environment that is more aligned with international standards can be built.

With this greater goal in mind, the compromises and concessions that China have made are not disadvantageous to China, and definitely not a “humiliation”.

In all honesty, while China’s reforms made some progress following ambitious proposals put up by the Third Plenary Session of the 18th Central Committee of the Communist Party of China, it still fell short of the Chinese citizen’s expectations. One of the main contributing factors is that the upper class and advocacy groups, including the administration and state-owned enterprises, are very powerful and have thus made matters highly complicated. Even if the higher-ups are determined in the policies’ implementation, most of these policies are all talk but no action. The public derives little satisfaction from the dividends of reform, with some industries even feeling indifferent towards it.

In contrast, the China-US phase one trade agreement, along with follow-up negotiations after its signing, may become a booster for the building of a quality market that is more open, and a market economy that is more comprehensive, just like in 2001, when China became a member of the World Trade Organisation. With this greater goal in mind, the compromises and concessions that China has made are not disadvantageous to China, and definitely not a “humiliation”.

Even if we look at the short-term effects, this phase one agreement not only cools the China-US trade war that lasted for almost two years and gives Chinese export companies a breather, it also temporarily puts the brakes on external concerns of a complete decoupling of China-US relations, and helps boost global economic confidence.

Thus, saying that the China-US phase one trade agreement is good for China, the US and the world, and is especially beneficial to the expansion of China’s opening up on all fronts, is not an exaggeration.

Related Reading: China held its own in phase one trade deal? | ASEAN’s future: China or the US? | [Outlook 2020] US-China geopolitical rivalry in 2020 and beyond