The PLA’s political role: The party still, and must always control the gun

While the Chinese government has paid more attention to the navy and air force contingents of the People’s Liberation Army in recent times, it is still the land forces that have the most political influence. The party is well aware that it is the latter’s might they would need in the event of internal uprisings and it is this constituent’s loyalty and strength they must ensure. 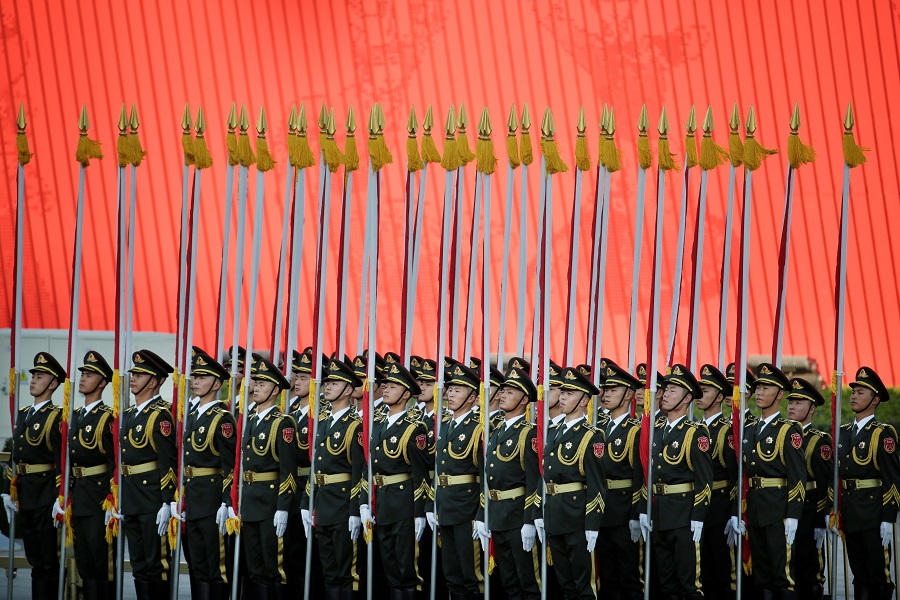 Members of the honour guard prepare for a welcoming ceremony at the Great Hall of the People in Beijing, China, 25 October 2019. (Jason Lee/Reuters)

Grace Chong - 25 January 2023
With rumblings of US House Speaker Kevin McCarthy possibly visiting Taiwan in spring, Yang Danxu observes that this will not be the last we see of the “Taiwan card” being played by US politicians as they move into the second half of the current US presidency.
Read more
Translated by Grace Chong on 14 July 2022

For most of its history, the People’s Liberation Army (PLA) has been an army-centric defence force. Indeed, since ancient times, China was a land power concerned with nomadic invasions from the north and the west. The PLA Navy (PLAN) and the PLA Air Force (PLAAF) have always played a marginal role since the founding of the PRC in 1949.

During the Korean War in the early 1950s, the PLAAF played a limited role while the PLAN was not involved at all. During the war with India in 1962 and the Sino-Vietnam War in 1979, both services played no role whatsoever.

China’s geostrategic conditions dictated that its military was heavily dominated by poorly mechanised infantry units made up of peasant conscripts. In the 1980s, the PLA consisted of a bloated 5 million men, with 4.5 million in the land forces. This meant that the army was dominant in the PLA and held significant political influence.

However, in the 1990s, several changes in China’s strategic environment led to the growth in power and influence of the PLAN and the PLAAF.

Shifting focus to sea and air

The fall of the Soviet Union meant that China no longer faced the threat of a land invasion. Meanwhile, the 1995-1996 Taiwan Strait crisis demonstrated that the PLAN and PLAAF needed urgent modernisation. Growing territorial disputes in the South China Sea and East China Seas further reinforced the need to modernise and expand the navy and air force.

Starting in the late 1990s and continuing to the present day, the navy and the air force began to receive more funding and better equipment than the land forces. Today, the PLA has around two million personnel of which less than half are in the land forces. While there are no reliable statistics, two Chinese military officers speculated to the author that the PLAN and the PLAAF absorbed over 60% of China’s defence budget in 2020.

...the land forces remain an important actor. For decades they were the ultimate guarantor of the Chinese Communist Party (CCP)’s survival.

More illustrative than the number of men and women in the navy and air force are the number of ships in the PLAN and the growing number of modern fighter jets and other aircraft in the PLAAF. The PLAN is currently the largest navy in the world in terms of tonnage and is getting larger by the day. With the rapid expansion of the navy and air force and a limited role for the land forces, one should expect a certain decline in the land forces’ political influence.

While this may be the case, the land forces remain an important actor. For decades they were the ultimate guarantor of the Chinese Communist Party (CCP)’s survival. This was clearly demonstrated during the suppression of the Tiananmen protests in June 1989 where the navy and air force played no role at all. Mao Zedong once said that “political power grows out of the barrel of a gun” and that “the party commands the gun, and the gun must never be allowed to command the party”.

In 2016, by undertaking a series of purges, mostly directed at the army, Xi ensured the loyalty of the land forces, while keeping the navy and air force happy with growing budgets and modern equipment.

Keeping the land forces in check

If changes to China’s external geostrategic environment have led to the rise of the navy and air force, growing domestic challenges have ensured that the army remains the ultimate arbiter in domestic politics.

Upon coming to power in 2012, President Xi Jinping began an unprecedented anti-corruption campaign aimed at tackling endemic corruption in the country, but also at consolidating his power. Several observers have pointed out that Xi is now the most powerful Chinese leader since Mao Zedong.

Under Xi Jinping, the Chinese constitution was changed to remove presidential term limits. Naturally, this unprecedented consolidation of power led to growing opposition within the PLA, the police and the intelligence service.

In 2016, by undertaking a series of purges, mostly directed at the army, Xi ensured the loyalty of the land forces, while keeping the navy and air force happy with growing budgets and modern equipment. The PLAN and the PLAAF play a major role in promoting Chinese nationalism and prestige by resisting foreign “aggression” in the South China Sea, Taiwan and elsewhere. As such the three services are vital to the survival of the CCP.

Growing unrest in Xinjiang, Tibet and Hong Kong further highlight the importance of the army’s domestic political role. Early this year, several army generals and other senior military officers were sacked in Xinjiang. While no details were given concerning the sacking of these officers, seasoned observers of Chinese party politics speculated that they were the result of differences with the senior civilian leadership regarding how to handle the unrest in Xinjiang. Since 2019, Xi Jinping has promoted 30 new generals mostly from the army.

A lingering suspicion still remains from Mao’s days that the more well-educated and urbane naval and air force officers may be more hesitant to quell domestic uprisings.

Key to the party’s power

While the PLAN and PLAAF have gained a greater say than the army in terms of regional foreign policy, the army remains dominant when it comes to domestic politics. The CCP knows that in times of domestic unrest and a struggling economy, the land forces are the ultimate guarantors of its survival. It is very unlikely that navy or air force personnel will be called upon to quell an unrest in Beijing or Xinjiang.

A lingering suspicion still remains from Mao’s days that the more well-educated and urbane naval and air force officers may be more hesitant to quell domestic uprisings. The CCP leadership has not forgotten that the Beijing garrison refused to break up the Tiananmen protests and army units from outside Beijing had to be brought in. The army is seen as closer to the CCP with many of its senior officers being the sons and grandsons of former army officers.

While Xi has achieved a significant degree of control and loyalty from the army, his control is not absolute as the many sackings and appointments discussed above demonstrate.

The importance of the army is reinforced by the fact that President Xi has long been suspicious of the police force and the domestic intelligence services. This was clearly demonstrated in 2014 by the arrest of Zhou Yongkang, China’s domestic security Tsar, and more recent purges in the police and the Ministry of Justice.

While Xi has achieved a significant degree of control and loyalty from the army, his control is not absolute as the many sackings and appointments discussed above demonstrate. This constant change in command is far more common in the army than in other services and demonstrates the CCP’s constant vigilance over the army.

In conclusion, while the navy and air force have gained greater influence and now receive the lion’s share of budget allocations, their influence in domestic politics remains second to that of the army. The navy and air force do have a strong say over regional security issues such as Taiwan and the South China Sea. However, the army remains the imperial guard. As it was before, power comes from the barrel of the gun and the party still controls the gun.

Related: China displays its new weapons amid cross-strait tensions | Japanese academic: China needs to show more self-restraint in PLA's military activities | With the Fujian, is China catching up to the US in aircraft carrier manufacturing technology? | What has changed in China’s South China Sea policy under Xi Jinping? | What does the high-profile launch of three new PLA warships tell us?