Prabowo has been in Indonesia’s political scene for decades and his chequered past has not deterred him from multiple runs for vice-president and president. Given his support from the conservative and radical Muslims, with a potential running mate that can boost his standing, will Prabowo finally make his mark as Indonesia’s president in the 2024 elections? ISEAS academic Leo Suryadinata gives a profile of this controversial figure. 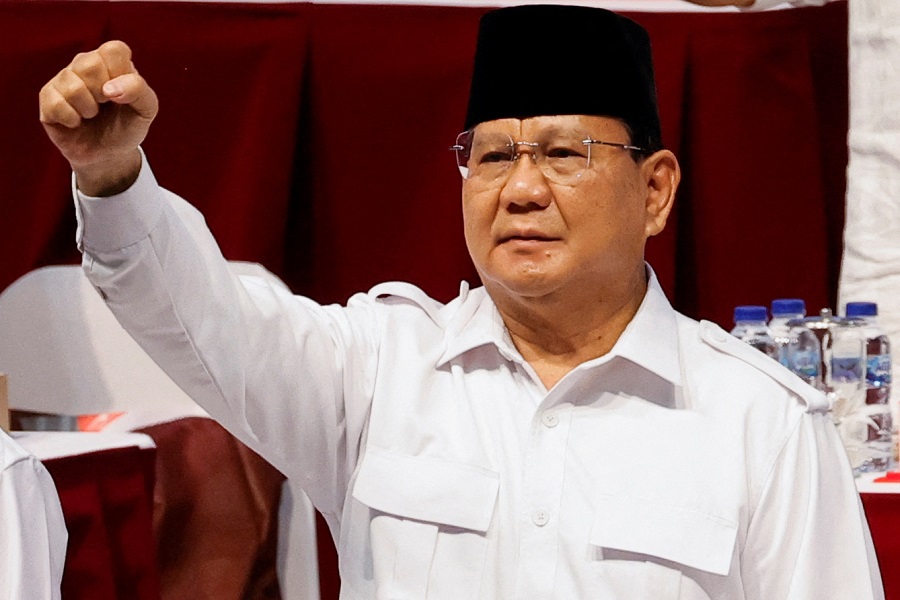 Grace Chong - 25 November 2022
China’s resurgence of Covid-19 infections has widened the gap between the young workers opposed to the tightening of controls, and the older generation that feel safer with strict measures in place. Given that the elderly make up a high proportion of the Chinese population, Chinese authorities seem to be holding fast to the dynamic-zero policy. Zaobao correspondent Wong Siew Fong tells us more.
Read more
Translated by Grace Chong on 21 September 2022

On 12 August, Prabowo was nominated by his party, Great Indonesia Movement (Gerindra) Party, to run in the 2024 presidential election, making him the only candidate among the three to officially confirm his candidacy.

Prabowo is a controversial figure with a complex background.

Meanwhile, on 4 September, Indonesian Democratic Party of Struggle (PDI-P) executive Puan Maharani (daughter of former Indonesian President Megawati Sukarnoputri) and her political team met Prabowo in Hambalang, West Java. The two political parties agreed to cooperate on the grounds of common interest, including both being nationalist parties. When asked by the media if they would run alongside each other in the presidential election, Prabowo revealed that it was highly possible.

Rising up the ranks

Prabowo is a controversial figure with a complex background. He was born to an aristocratic Javanese family on 17 October 1951. His father Sumitro Djojohadikusumo was a renowned economics professor and politician, who had served as finance minister, industry and trade minister in the 1950s, and was previously dean of the economic faculty at the University of Indonesia. Prabowo also has two older sisters and a younger brother, and his mother was a Manadonese Christian.

Sumitro supported the rebellion in Sumatra and Sulawesi against the Sukarno-led central government in the mid-1950s. The movement was defeated by the central government and Sumitro went into exile, returning to Indonesia only after Sukarno was overthrown. Sumitro was then appointed minister of industry and trade as well as minister of research under the Suharto administration.

Having lived abroad from a young age, Prabowo was fluent in English. He enrolled in the Indonesian Military Academy in Magelang in 1970 and graduated in 1974. He then served in the Indonesian National Army Special Force Kopassus and was made commander of Group 1 Komando Pasukan Sandhi Yudha (Kopassandha), becoming the youngest commander at the time. Prabowo was later credited with success for his counter-insurgency operation in East Timor. In 1983, Prabowo married Suharto’s daughter Titiek Suharto and became the former president’s son-in-law, steadily moving up the ranks.

Prabowo converted from Christianity to Islam after marrying Titiek.

Reportedly, during Suharto’s middle reign, the Indonesian army was split into the “green” (Muslim-oriented) and “red and white” (nationalist) factions. Prabowo joined the green faction and was at odds with Luhut Pandjaitan, who joined the other faction. Luhut is currently the coordinating minister for maritime affairs and investment in Jokowi’s Cabinet.

In fact, Prabowo converted from Christianity to Islam after marrying Titiek. Despite his little knowledge of Islamic chants and infrequent visits to the mosque, he became an important figure in the Muslim-oriented faction of the Indonesian army nearing the end of Suharto’s reign and successfully weakened the influence of the nationalist faction. He also cultivated the Muslim forces outside the military in a clear bid to gain the support of Muslim voters and inherit his father-in-law’s position.

Prabowo and his team led a series of anti-Chinese campaigns involving atrocities such as the rape and murder of Chinese women, which Prabowo later vehemently denied his involvement.

In March 1998, near the end of Suharto’s reign, Prabowo became the head of Kostrad (Indonesia’s Army Strategic Reserves Command). His team abducted and tortured many pro-democracy anti-Suharto activists and student leaders. Suharto had lost the people’s support as a result of the economic crisis, and to divert attention and help secure Suharto’s position, Prabowo and his team led a series of anti-Chinese campaigns involving atrocities such as the rape and murder of Chinese women, which Prabowo later vehemently denied his involvement.

The campaign proved futile, and amid student protests and mass demonstrations, Suharto resigned as president of Indonesia on 21 May 1998, and handed over power to then Vice-President B. J. Habibie. That same day, Prabowo personally requested the new president to replace Wiranto with him as defence minister. Habibie refused, and Prabowo retaliated by surrounding the presidential palace with tanks, causing a rift between them. The Military Officers’ Honour Council later found Prabowo guilty of abduction, insubordination, and “giving order to deprive others’ freedom”, and discharged him from military service.

In light of his involvement in serious human rights violations, Prabowo was blacklisted by the US and banned from entering the country. Seeing that it was difficult to make a comeback, he self-exiled to the Middle East to become a businessman. Before leaving, Prabowo divorced Titiek, becoming Suharto’s former son-in-law.

Prabowo wanted to be president and began to use his previous political capital to work with conservative and radical Muslims, manipulating identity politics to deal with his opponents.

While overseas, Prabowo and his brother Hashim Djojohadikusumo ventured into lucrative businesses. Biding his time, Prabowo returned to Indonesia in 2004 to run for chief of the Party of Functional Groups (Golkar) but was unsuccessful. Failing to control the party that his former father-in-law founded, in 2008 Prabowo and his supporters established the Gerindra Party and prepared to run in the presidential elections.

Megawati lost the election, but Prabowo did not give up and doubled down for the next one.

Islamic influence was rising in Indonesia at the time under the influence of the Middle East. Prabowo wanted to be president and began to use his previous political capital to work with conservative and radical Muslims, manipulating identity politics to deal with his opponents.

In the 2014 presidential election, Prabowo and his running mate Hatta Rajasa went up against Joko “Jokowi” Widodo and Jusuf Kalla. His team went all out to attack Jokowi, smearing him as an infidel, communist and ethnic Chinese, successfully closing the gap in votes but not enough to win.

Prabowo did not give up — he repeated his efforts for the 2019 election, seeking victory through identity politics. But this time, Jokowi also tapped on identity politics, partnering with Nahdlatul Ulama’s conservative leader Ma'ruf Amin, while Prabowo worked with young tycoon Sandiaga Uno to vie for the presidency. Faced with another loss, Prabowo did not concede, as his supporters rioted and tried to overturn the results. The riot threatened Indonesia’s democracy, and he eventually conceded.

Defence Minister Prabowo was invited to visit China; even the US, which had banned him from entering, invited him to visit, while the charges of “serious human rights violations” were put aside.

Jokowi is a skilled statesman. He did not seek to exclude Prabowo and instead pulled Prabowo close and made him defence minister, against the objections of allies. As a former military man who was suspended from service, it was a great honour and incentive for Prabowo to legitimately become the defence minister in charge of Indonesia’s military. Prabowo joined Jokowi’s cabinet, ignoring the objections from conservative and radical Muslims.

In the few peaceful years that followed, the Jokowi administration focused on the economy, and bringing radical Muslims and the pandemic under control. Defence Minister Prabowo was invited to visit China; even the US, which had banned him from entering, invited him to visit, while the charges of “serious human rights violations” were put aside.

Of course, Prabowo would not be satisfied with just being a defence minister — he still dreams of being president. Prabowo claimed on 1 June 2022 that he hopes for young people to run for president. In addition, the NasDem (National Democratic) party chair also wants Prabowo to take a back seat and give way to younger candidates. However, on 12 August, Prabowo was nominated as presidential candidate — his party says that there are no other suitable candidates. Although some felt that Minister of Tourism and Creative Economy Sandiaga Uno is a suitable candidate, he does not have the full support of the party.

At the rally accepting the nomination, Prabowo lauded Jokowi as one of the greatest presidents in Indonesia’s history and acknowledged Jokowi’s achievements and wisdom in governing Indonesia. He also thanked Jokowi several times for magnanimously inviting him, then an opponent, to join the cabinet and serve the country. His praise of Jokowi was rather unexpected, and some feel that he is trying to gain Jokowi’s support for the presidential election.

According to election rules, presidential candidates have to be nominated by a political party that has 20% of parliamentary seats. Gerindra only has 13% of the seats and needed the support of another alliance party to meet the criterion. It eventually allied with the National Awakening Party (Partai Kebangkitan Bangsa, PKB), which had 10% of the seats, to jointly nominate Prabowo as candidate. Logically, PKB chair Muhaimin Iskandar should be the vice-presidential candidate. But because Muhaimin has a very slim chance of winning, Prabowo would more likely lose the presidency with this pairing.

If he can ally with Puan Maharani of the PDI-P, then the controversial Prabowo — who will be 73 in 2024 — might still have hope for the presidency. Nonetheless, it is still too early to tell if victory is in the cards.